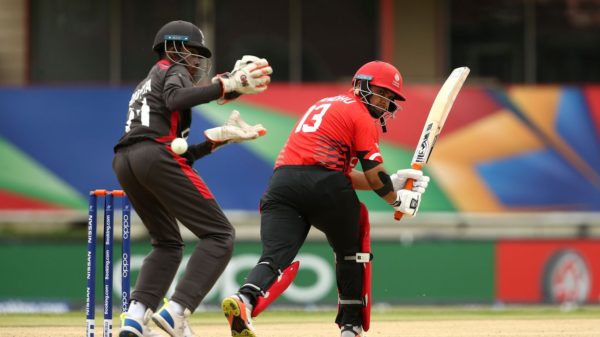 UAE opener Jonathan Figy scored the 2020 Under-19 World Cup's first century, a thoroughly smooth, 101-ball 102 that helped his side beat Canada by eight wickets in Bloemfontein. The 18-year old, who had last year played with the senior team in ODIs, was at the crease from start to finish as a chase of 232 proved quite straightforward. UAE benefited from an all-round performance from their captain as well, Aryan Lakra picked up 2 for 39 in 10 overs and returned as opener to score a half-century as well.

Canada had a solid performer in their top order as well - Mihir Patel scored 90 off 105 balls - but they couldn't take advantage of it due to a couple of mini-collapses. Their score, after being put in, lurched from 133 for 1 to 137 for 4 in the middle overs and then from 220 for 5 to 226 for 8 at the end. Patel did his best, hitting nine fours in his innings and contributing nearly 40% of his team's total, but it wasn't enough.

Having been sent in to bat, the Canadians got off to a most promising start with Patel and Randhir Sandhu adding 82 in an opening stand. Sandhu’s dismissal for 35 brought Akhil Kumar to the crease. Kumar scored 30 in a 51 run partnership with Patel before becoming Canada’s second wicket to fall. Apart from Muhammad Kamal’s quick fire 17 ball 31, which included two sixes and as many fours, there were no other contributions of note as the Canadians faltered badly to post a below par 231/8 at the completion of their 50 Overs.

Chasing the 232 for victory at a required run rate of 4.64, UAE despite the losing opener Vriitya Aravind relatively early, caught by Kumar off Muhammad Kamal’s bowling for 21 in the sixth over, UAE easily reached its target for the loss of only one additional wicket. Jonathan Figy (102*) and captain Aryan Lakra (66) featured in a 149 run second wicket partnership that laid the platform for their eventual very comfortable eight wicket victory.