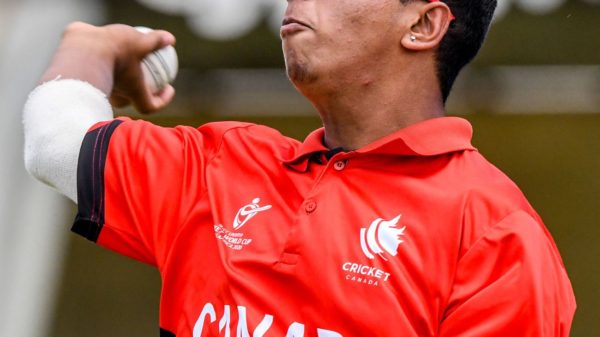 Canada’s winless run at the South Africa hosted ICC 2020 U19 World Cup has continued with its January 28, 96 run loss to Zimbabwe in the competition’s Plate Championships quarter-final. Chasing a victory target of 272 from 50 available overs the Canadians never recovered from the disastrous start of losing its first wicket with the score on one and the second at 2-2. They were eventually bundled out for 176 in 47.3 overs, 96 runs short of their 272 run victory target.

Having won the toss and deciding to bat, Zimbabwe lost its first wicket in just the third over with only 10 runs on the board. Thanks to an aggressive 95 ball 105 from Emmanuel Bawa, that was well supported by fifties Gareth Chirawu (54) and Taurayi Tugwete (50), Zimbawe however recovered sufficiently to post a challenging 271/7 at the conclusion of its 50 overs.

Chasing 272 to win, from 50 available overs at a relatively comfortable required run rate of 5.44, the Canadians got off to the worst possible start losing its first two wickets to be left reeling at 2-2 at the end of the third over. Eshan Sensarma (13) and Akhil Kumar added 44 for the third wickets to restore some stability to the Canadian innings.

The loss of Kumar’s wicket, caught behind off the bowling of Chirawu for 24, however triggered a steady procession of Canada’s batsmen from the pavilion and back as the remaining wickets tumbled in far too regular intervals. Rishiv Joshi (26) and Hermanjeet Bedi (24) featured in a 36 run last wicket partnership to add some semblance of respectability to the Canadian innings, by reducing the eventual deficit to 96 just under 100 runs. Joshi was eventually bowled by Tugwete to be the last man out, allowing Zimbabwe’s players to celebrate a comprehensive victory and their progression to the Tournament Plate Championship’s next round.

The Canadian’s next match will be a January 30 Plate Playoff semi-final encounter against Japan U19.

Canada-Afghanistan ICC 2020 U19 World Cup Match Abandoned Due To Rain!