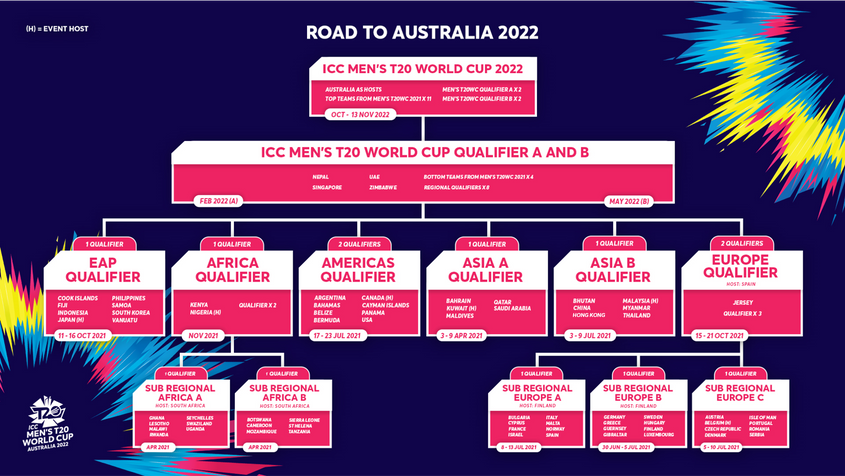 The International Cricket Council (ICC) has announced
the qualification pathway for the ICC Men’s T20 World
Cup in Australia which is set to take place in October
and November 2022.
The 15 spots in Australia will be decided through a fourstep
qualifying process which starts in April 2021. 11 regional
qualification tournaments across five regions have been
rescheduled to 2021, due to COVID-19 and will now feed into
the 2022 Australia event.
With the return of cricket in early 2021, we will see 86 different
teams with the opportunity to fill the 15 World Cup spots –
with hosts Australia already securing one – over a 13-month
qualification campaign. For the first time ever Hungary,
Romania and Serbia will be competing for Men’s T20 World
Cup qualification and Finland will play host to an ICC event for
the very first time. In a festival of cricket it will also be the first
time that Japan will host a Men’s T20 World Cup Qualifier, on
the back of the U19 Men’s Cricket World Cup Qualifier they will
host two weeks before.
At regional level there will be 67 Associate Members taking
part. Due to the depth of strength within Africa and Europe,
both regions have sub regional qualifiers feeding into a final
qualifier for the region. Africa, Americas, EAP and Europe will
have one top tier regional qualifier and Asia will have A
and B to determine which teams will progress into the
two eight-team global qualifiers.
The 16 available spots in the Global Qualifiers will
be filled by one team each from the Africa and EAP
Qualifier respectively. They will be joined by two teams
each from the Americas and Europe qualifiers. Finally,
Asia which has a Qualifier A and B will see one team
from each event make up the eight spots from regional
qualification.
The remaining eight spots will go to the four bottom
teams from the ICC Men’s T20 World Cup 2021 and
together with Nepal, Singapore, UAE and Zimbabwe
which have gained direct entry based on their MRF
Tyres ICC Men’s T20I Team Rankings.
Four teams from the two global qualifiers will join hosts
Australia and the 11 automatic qualifiers from the ICC
Men’s T20 World Cup 2021 to make up the 16-team
Men’s T20 World Cup 2022.
In the lead up to the Australia event there will be 225
Men’s T20 Internationals scheduled to be played across
13 months, giving every team an opportunity to climb
the MRF Tyres ICC Men’s T20I Team Rankings.