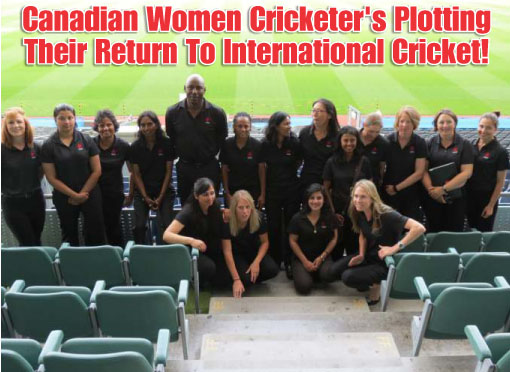 After a hiatus of five years the Canadian Women’s Team will once again have the opportunity to play international cricket in 2019! A long-awaited return has been made possible by a decision taken by the International Cricket Council (ICC) on Oct 20, 2018 changing the qualification pathway.

The International Cricket Council confirmed that there will be a qualifying event in all five ICC regions ( Americas, Europe, Africa, Asia, East Asia Pacific) with the top team in each region progressing to the ICC Women’s Cricket World Cup Qualifier / ICC Women’s World T20 Qualifier. This changes the qualification to the 2021 ICC Women’s World Cup which will now see the hosts plus the top four teams from the ICC Women’s Championship qualify directly whilst the bottom three teams in that competition will join Bangladesh, Ireland and the five regional winners in the Qualifier.

The last time a Canadian Women’s team competed internationally was in 2013 when they won the America’s Cup (Regional Qualifier) and went on to play in the ICC Women’s T20 Qualifier in Dublin, Ireland Jul 23-Aug 1, 2013. With the suspension of the America’s Cup (regional qualifying tournament for the Americas Women’s teams), no team from the Americas has had the opportunity to compete in any regional/international tournament. However, in 2017 the USA Women’s team was allowed to compete in the Europe/Americas qualifier in Scotland without any regional qualifying tournament being played to determine a regional winner.

This year, ICC Americas has recently announced that a qualifying event will be played between USA and Canada (May 2019) to determine the Americas team that will participate in the next ICC Women’s T20 qualifier.

With the return to International Cricket, 2019 is shaping up to be an exciting time to be playing cricket in Canada. In anticipation of the opportunities coming up, CC hosted the first ever Women’s National tournament last year to identify the talent pool. A training squad to prepare for the qualifying event to be held in May in Florida, will soon be announced and a series of training and preparation events will follow. The event in May will feature some warm up games with a MCC women’s team and a combined team from the South Americas followed by a regional qualifier between the USA and Canada.

CC recently announced that Rupert Stephenson ( ICC Level 2 Coach) will be the Coach for the Women’s National team.

CC is encouraging Provincial Cricket Boards to ramp up competition events for the women through the year with the Women’s Nationals being the culmination event for the season. CC’s vision is to expand the National tournament to include more domestic teams and feature some international teams as well to increase the competitive level of the tournament.