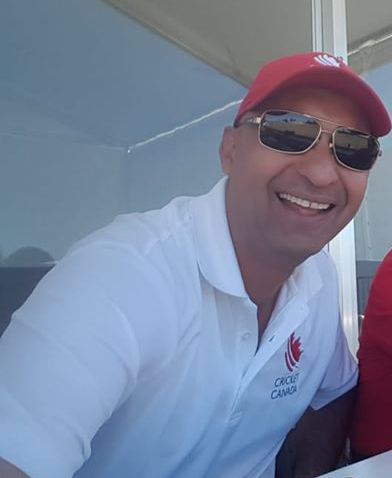 Newly elected President Rashpal Bajwa has pledged to lead a Cricket Canada Executive Board that will
strive to be transparent and accountable and answerable for its decisions as a means of restoring lost
trust in the organization. The President’’s comments were sent to Cricket Canada Wickets just hours
after his election to office during the organization’s June 27, 2020 AGM.
The full text of President Bajwa’s Message is as follows:
I would like to take this opportunity to thank all the stakeholders who have put their faith in me to lead this prestigious organization . I assure the Canadian cricketing fraternity that maintaining the integrity of this office
and restoring their trust in Cricket Canada will be my utmost priority .
I welcome all the newly elected and present Board members . I am very excited and looking forward to working
with the Executive Board that has been assembled . We as a Board will be transparent, accountable and answerable
for the decisions we make on behalf of our members and stakeholders .
The most pressing task for this Board will
be to unite this country and resolve any
pressing issues our cricketers/members
are experiencing presently. This Board will
utilize all the regional and national expertise
to accomplish the task of uniting this great
country.
Our decisions and resources will be fairly
untied for the development of grass-root
cricket for men, women and kids. We would
bring back the sense of pride and aspiration
in our athletes,staff,coaches,managers and
most importantly the administrators.
This Board will be inclusive ,fair ,accountable
and will ensure the stakeholders are involved.
I would request all cricket lovers in this
country to support and help us in taking
cricket Canada where it belongs, amongst
the top associate nations in the world.
I am a firm believer in actions speak louder
than words, so be patient and join us in this
journey.
Regards
Rashpal Bajwa

Born in Jalandhar, India to an army family, Rashpal Bajwa immigrated to Canada from Hyderabad in 1996 after completing his Bachelors Degree in Engineering .
Having settled in Canada, Rajpal completed his certification in aircraft maintenance engineering from BCIT. He
then worked with Air Canada as a licensed Aircraft engineer for over a decade. Rashpal now owns and manages his own own business with 15+ employees.
Born into an athletically oriented
family, Rashpal has been a sports
junkie since birth. He has played
all major sports at various levels
including cricket. His main interest
as a young boy was however in track
and field, with his specialty events
being the 200 meters, long jump
and triple jump. His grandfather
and father were both extraordinary
hockey players.As such it shouldn’t
be much of a surprise to anyone that
Rashpal had also played hockey for
Dehradun District.
As far as cricket was concerned,
Rashpal did represent his school
in Grade 12 and was captain of his
college team in a few tournaments.
After immigrating to Canada
cricket was the one sport that he
kept in touch with. He joined the
local British Columbia League and
has been playing for the last 20
years, having only retired from his
Surrey Hawks Cricket Club’s first team 4 years ago. He still plays for the Hawks’ Over 40s team, which has been 3
times champions in the last 4 years .
Rashpal’s involvement with Cricket Canada began in 1997 soon after he had become active as a player. Initially
he was only involved with the Surrey Hawks Club in a limited capacity. His involvement however grew when he
took on the responsibility of captaining the Second Team. From there he soon progressed to become the Club’s
President in 2006.
Since then Rashpal Bajwa’s rise through the ranks of Cricket Canada’s administration has been meteoric. In 2008
he was elected to the BCMCL League as a Delegate and just two years later, in 2010 he became the BCMCL’s
Vice President. By the following year, 2011, Rashpal had become Cricket BC’s 2nd Vice President. Two years
later, in 2013, he assumed full administrative control of Cricket BC by becoming its President. His outstanding
performance in that role led to his 2016 election as a Cricket Canada Vice President.
The two terms he served as a Cricket Canada Vice President would have provided Rashpal Bajwa with the ideal
foundation for his now newly assumed role of President. The entire Canadian and international cricket community
will want to wish him every success in his new role.