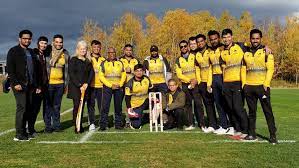 Cricket New Brunswick was able to complete its 2020
season, though delayed by a month due to the impact
of a global pandemic. In the end, we were very happy
that Cricket was played following all public health guidelines
issued by National and local governing bodies. Fortunately,
due to the location in Atlantic Canada and various other
factors we were able to have a complete season for T20
and 40 overs tournaments with no match (except for the
final for T20 due to local government requirement to control
the spread of virus) being abandoned due to weather.
The Leadership was prepared and took proactive steps in
preparing return to play guidelines, issued a communication
to coordinate League’s adherence to the COVID-19
requirements of the province and city. There was
continuous communication and coordination with the field
rental, officials, club leaders and etc. to ensure all COVID-19
related compliance was followed to each specific point.
In fact, one of the provincial health inspectors was present
during one of our matches and had no issues with how we
were conducting ourselves on the field especially with social
distancing.
Cricket New Brunswick traveled to Prince Edward Island to
participate in Maritime Cup and finished as runner’s up in
the 2020 Maritime Cup. Unfortunately, due to the closure of
borders between Atlantic Canada and Quebec and travel
restriction for Newfoundland, we could not host Eastern T20
tournament, all the provinces shared similar disappointment
with their players but it was out of our control for 1 year
hopefully in 2021 it would be different.

I am very excited to report to Cricket Canada
that Cricket New Brunswick’s talent pool is
growing by leaps and bounds, which only means
as a Board we must work harder to support such
quality talent pool. Hence the focus of this current
Cricket New Brunswick Leadership team is to build
sustainable infrastructure for nurturing this talent
that can play high level quality cricket and be
a great ambassador for the sport in the New
Brunswick and Canada. We are confident that
this will lead to the growth of Cricket in the province
by number of clubs and teams, even in regions
where earlier there was no cricket played. Cricket
New Brunswick’s leadership team’s aim is to have
all the eight regions of New Brunswick either
participating in competitive Cricket or involved
in some level of recreational Cricket by the year
2025.
Cricket New Brunswick for the first time won
Provincial level awards (Sport New Brunswick)
showcasing dedication, commitment, hard work
and teamwork for the development of sport in the
province. Kapil Choudhary won the 2020 Konica
Minolta award for Volunteer-Administrator of the
Year from Sport New Brunswick for his effective
leadership during the year working closely with
department of Sport & Recreation and Sport NB
to provide the safe environment for our members
to play Cricket. One of his
achievements was working with other neighboring
Maritime provinces in organizing the only regional
tournament played in Canada subject to social
distancing guidelines
.
Cricket Moncton – Cricket New Brunswick’s
member club won the 2020 BrunNet Team of the
year award for being 40 overs champions and
runner’s up in T20 New Brunswick Cricket Leagues.
It was a great recognition for committed and
professional leaders and players with the club
who continue to grow with other clubs in New
Brunswick. They are the newest club, which will
inspire other new clubs too.
We also got recognition for our officials. Winston
D’Souza won the Taylor Printing Group Inc official
of the year award, recognition for his continued
leadership with Cricket New Brunswick Umpire
Committee as well at the Atlantic level, he
has been the committee chair since 2019 and
continues to excel. He is certified and continues
to work towards completion of his umpire
certification as well as training and building the
umpire pool in New Brunswick.
Cricket New Brunswick umpire committee
continued with the training as last year, we
were privileged that Guest Umpires like Saurabh
Naik and Bijal Patel attended our training and
imparted their knowledge. This also led to us
training the regional umpires together with our
Atlantic neighbors, a very positive step and
hard work will yield result that will support Cricket
Canada initiative of National Umpire committee
for training and development.
The youth/ kids program were suspended as our
volunteers could not enter schools as province
wide strict COVID-19 measures were in place,
we understand but this year there is a conversation
that during fall such activities could resume.

Much Acc omplished By Cricket Newfoundland- Labrador Despite Covid’s Restrictions: