England bossed India in every department at the Sir Vivian Richards Stadium, as they produced a masterclass of adapting to unusual conditions to deny India a maiden appearance at a World T20 final. England, who last won the tournament in its inaugural edition in 2009, will play their fourth final on November 24, and meet Australia for the third time in the title match 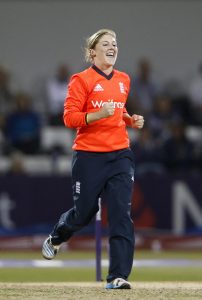 England’s spinners laid the foundations for their success, with Sophie Ecclestone, Danielle Hazell, Katie Gordon and  Heather Knight finishing with combined figures of 7 for 71 from 13.3 overs. They ripped through the lower middle sending India hurtling from 89 for 2 to 112 all out

It was certainly a below-par total, but few would have predicted England chasing it down in such a friction-free manner. Amy Jones and Natalie Sciver, steered England home with an unbroken third-wicket stand of 92.