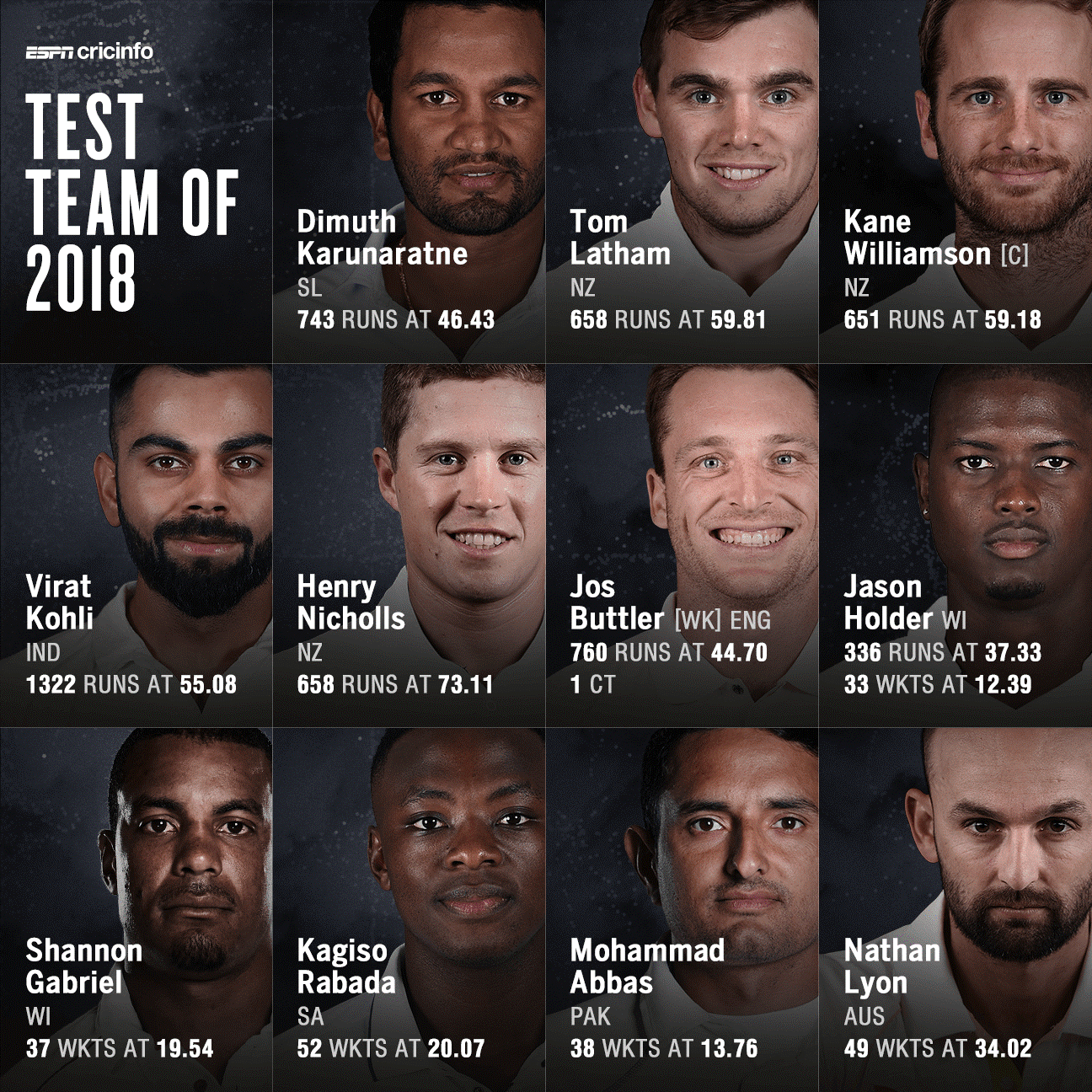 India were the No. 1 Test side through 2018, but only one Indian, the unstoppable Virat Kohli, makes it to ESPNcricinfo's Test team of the year. Meanwhile No. 8- ranked West Indies are represented by two players: fast bowler Shannon Gabriel and their captain, Jason Holder, whose wish to be seen as a genuine allrounder came true in 2018 with a batting average of 37.33 and a bowling average of 12.39.

But the team that grabbed three spots in our Test XI is New Zealand, who played only seven matches last year. Kane Williamson led them to a historic and thrilling series win in the UAE, and so will ably lead our side in all sorts of challenging conditions. If he wins the toss (he did five times in 2018) and bats first, he will send out his teammate Tom Latham to face the new ball, alongside Sri Lanka's Dimuth Karunaratne, the leading run scorer among openers in 2018.

Latham's 264 not out was the highest score in a year in which openers averaged a very lean 28.5.
Now, a contentious choice: Jos Buttler is our man behind the stumps, though he kept in only
one Test (plus half of another as a replacement for Jonny Bairstow). However, as a batsman, he made
seven 50-plus scores, so he'll shore up the lower order well along with Holder.

At the start of 2018, Jason Holder averaged 29.00 with the bat in Test cricket, and 38.52 with the ball.
Those numbers fit the widespread perception of Holder at the time; a useful lower-order batsman and a
useful medium-fast workhorse, but perhaps not good enough in either capacity to make a top Test
team as a batsman or bowler alone. In five Tests this year, though, all of them played in the last two
months, Holder's record has improved dramatically, particularly on the bowling front. Three Tests against Sri Lanka and two against Bangladesh have brought him 28 wickets at 12.00, including three five-wicket hauls, and 265 runs at 37.85. Back in July 2018, after a player-of-the-match performance in West Indies' 166-run win at Sabina Park, Holder's career numbers finally looked like those of a
top-drawer allrounder, his batting and bowling averages on the right sides of 30. He credited the selectors for giving him, and the young players who are now growing into the team's recognizable core, a run of opportunities to find their feet as Test cricketers. Holder also admitted that he had benefited from helpful bowling conditions. And while he has been a consistent lower-order contributor on those same surfaces, he hoped to make bigger scores more often and push for a move up the order.

Holder batted at No. 7 in the series against Sri Lanka, but moved further down the order against Bangladesh with the team going in with an extra batsman. While he wants to bat at No. 6 or 7, eventually, he’d said the decision would have to be made by the selectors.