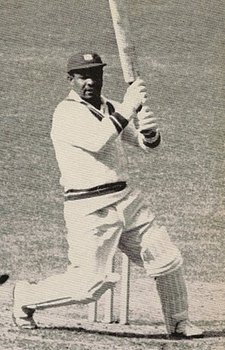 The official funeral service for the former West Indies and Barbados batting maestro Sir
Everton Weekes, who died at the age of 95 on July 1st, has been scheduled to be held at
Kensington Oval on Thursday July 30. Sir Everton will be interred at the University of the West
Indies Cave Hill Campus ’3 W’s Memorial Site. His tomb will be next to those of Sir Frank
Worrell and Sir Clyde Walcott, the other two predeceased members of the trio who dominated
West Indies’ batting from 1948 to 1958.

These three illustrious batsmen were born within a mile of
each other. Sir Frank in Bank Hall, St Michael, Sir Clyde at
the corner of Baxter’s Road , Bridgetown and Sir Everton
born in Pickwick Gap, St Michael just outside of Kensington
Oval on February 26, 1925.
His father left Barbados when he was eight to work in
the Trinidad oil fields, and Sir Everton didn't see him again
until he was 19. Sir Everton was never an occupier of the
crease, he always was looking to keep the scoreboard
moving, in addition to his brilliant batting Sir Everton was
an excellence fielder
Unlike Sir Frank and Sir Clyde who were born into black
middle-class families and were educated at Combermere
and Harrison College two of the island’s leading secondary schools, Sir Everton were born into a working class family
and did not have the benefit of a secondary education, he
was educated at St Leonard’s Primary School.
Sir Everton in his boyhood days spend a lot of time helping
the groundsmen prepare the pitch at Kensington Oval
which allowed him to watch first-class matches. He
caught the eye of the public while playing cricket in the
Barbados Cricket League competition, he later joined
the Barbados Regiment during World War Two and
Lance Corporal Weekes became a member of the
Garrison Sports Club, shortly after, he became a
member of Empire Club.
At the age of 16 Sir Everton was called to trials
for Barbados, and made his first-class debut in
1944. Four years later he made his Test debut
against England in the first Test against England
at Kensington Oval. He made a reasonable start
to his Test career, batting at number three, Sir
Everton was caught by wicketkeeper Godfrey
Evans off fast bowler Maurice Tremlett for 35 in
the first innings off spinner Jim Laker bowled him
in the second innings for 25.
In the second Test at the Queen’ Park Oval, scored
36 and 20, after scoring 36 in the third Test at Bourda
, Sir Everton was dropped for the fourth Test at Sabina
Park. The great George Headley who had injured his
back in the first Test was recalled to the team. Headley
had not fully recovered from his injury and the selectors
decided to recall Sir Everton for the Test two days before
it was scheduled to start.
He arrived in Jamaica while the game was in progress
and ved for went straight to ground, the West Indies were fielding,
when the West Indies batted Sir Everton came to the crease
with the score at 39 for one wicket, he proceeded to hit
the ball all around Sabina Park for a magnificent 141.
This century was the first of five successive Test centuries by
the batting maestro, the West Indies toured India in 1948/49
and Sir Everton scored 128 at New Deli, I94 at Bombay, 162
and 101 at Calcutta, he missed a six consecutive hundred
when he was run out for 90 at Madras. Sir Everton was just
24 years of age when he established the record . Seventy
one years later, he remains the only batsman to score
five consecutive Test centuries.
His record of five consecutive Test centuries must be view
in its sociological context, at the time it was established in
1949, Barbados was five years away from having Universal
Suffrage, therefore Sir Everton could not vote, but his record
would have sent a strong message other West Indians of a
similar background that they too could succeed if given the
opportunity.Sir Everton was the most prolific batsman for
the West Indies during the decade he played
Test cricket, he hit 779 runs in the five Tests
in India during the West Indies tour there in
1948/49 , which was the then record aggregate
for a West Indian batsman in Test cricket. Sir
Everton good form continued when the West
Indies toured England with 338 runs at 56.33
including 129 in the third Test at Trent Bridge.
He fell below his high standard in Australia
when the West Indies toured Down Under in
1951, but was way ahead of all the other
batsmen against India in 1953 on their first
visit to the Caribbean, he amassed 716 runs at
192.28, including 207 in the first Test at Queen’
Park, 161 in the third Test at Kensington Oval,
and 109 at Sabina Park.
Sir Everton continued to score heavily at
home against England in 1954, compiling 487
runs including 206 in the fourth Test when he
and Worrell added 338 for the third wicket. Sir
Everton was dominant against New Zealand
on the West Indies toured there in 1955/56, he
made 418 runs, including 125 at Dunedin, in
the first Test, 103 in the second Test at Christ
Church and 156 in the third Test at Wellington.
In his final Test series against Pakistan in 1958,
he registered 455 runs at 65.00 including 197
at Kensington Oval, after the series against
Pakistan, Sir Everton retired from Test cricket at the age of 32, he scored 4,455 runs , including 15 centuries at 58.61,
and held 49 catches. Sir Everton also played in the English League and toured with various Commonwealth sides, In
first class matches he scored 12,010 runs including 36 centuries at 55.34.
After he retired Sir Everton became a Government coach at the then Government Sports Department , managed the
Barbados team in the Shell Shield Tournament and was the manager of the West Indies team when England toured
the region in 1968.
He also served several years served as a comment person on radio during first-class and Test matches at Kensington
Oval. He also performed duties as an International Cricket Council referee. A skilled bridge player he represented
Barbados international bridge competitions.
Sir Everton was knighted in 1995, he leaves to mourn his sons Andy, David a former Barbados and West Indies
wicketkeeper and daughter Sharon. His interment will take place at the Cave Hill Campus of the University of the West
Indies