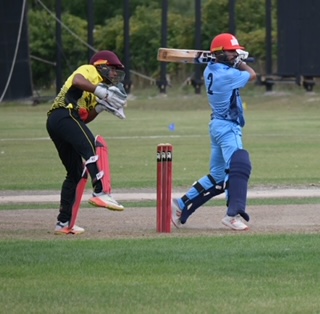 A superior net run rate was the deciding factor that allowed Fury to claim title honors at the Wednesday, September 15 conclusion of the 2021 Men’s National Championships played at King City’s Maple Leaf Cricket Club. Fury and the Stallions both ended with identical records of 4 wins, two losses, and 8 points from 6 matches played. Fury’s net run rate of 0.656 was, however, superior to the Stallions’ 0.409 thus allowing the former to claim the honors as 2021 Canadian National Men’s Champions.

There were several outstanding individual performances with both bat and ball during the three day September 13-15, 2021 Championships. Hamza Tariq’s 146 runs aggregate from 6 innings batted for a 48.67 average, placed him atop of the Batting Leaderboard. Tariq was very closely followed by Canadian National all-rounder Saad Bin Zafar, who compiled 140 runs from 5 innings for a 35.00 average.

Aaditya Varadarajan’s aggregate of 139 runs from 5 innings at a 34.75 average placed him third among the leading batters. The numbers four and five spots were occupied respectively by Yasir Abbasi: 125 runs from 5 innings for a 41.67 average, and Hiral Patel 117 runs, 6 innings, 19.50 average.

Dirshall Patel, with 10 wickets taken at a 5.43 economy rate and 7.6 average, was third on the Bowler’s Leaderboard. Uday Singh captured 8 wickets at a 5.17 economy rate and 11.63 average to finish fourth among the Championships’ top bowlers, narrowly ahead of Junnaid Siddiqui whose identical haul of 8 wickets was captured at a slightly higher economy rate of 6.85 and a somewhat inferior average of 17.13