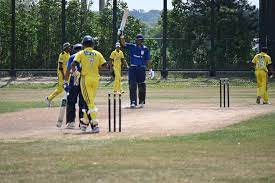 CC MEN’S NATIONALS DAY
The Canadian National Men’s T20 Championship
was played at Maple Leaf Cricket Club between
September 13th -15th, 2021. Canada’s talent was
divided into four teams and to ensure competition
between teams in three days, two matches were
played simultaneously on adjacent pitches (one
set in the morning and one set in the afternoon).
The facilities were well-prepared and the teams
enjoyed playing the game on the world-class pitch.
It felt great to witness young talent from across the
nation and with all teams putting forward their
best; it was evident that the matches
promoted healthy competition and
brought the best out of our athletes. The
matches were dominated by outstanding
batting, spectacular bowling and above
all an undying spirit. While we saw
new talent, Canadian National team
“regulars” kept on delivering consistent
and entertaining performances for
their respective teams.
Overall the tournament witnessed good
Cricket and fierce competition between
the teams but ultimately only one team
can win and so the Canada Cup Men’s
Nationals were won by Fury.

CANADA CUP U18
This summer we got a peek into Canada’s
cricket future as the U18 Canada Cup
progressed on Aug 23rd -25th at King
City. Young players displayed their
talents on the cricket ground amidst
great support and appreciation. Two
unbeaten teams, British Columbia and
Ontario Gold reached the finals. The
match was anticipated to be a close,
exciting contest. However, it turned out
to be a non-contest of epic proportions
as Ontario Gold stunned BC with
a massive 125 run victory. Cricket
Canada Development team enjoyed
a similar victory over the Combined
Prairies.
The Tournament was concluded with the presentation ceremony of medals and
trophies to the outstanding players as
well as the umpires and scorers; it was
heartening to see the support for youth
by the community and parents.

WOMEN’S CRICKET
Women’s Cricket is a priority for Cricket
Canada and currently preparations
are underway for the upcoming ICC
Americas T20 Women Qualifier being
held in Mexico. Our team is really
excited for the opportunity to play the
upcoming matches as this would be
the first time Canada will be rubbing
shoulders against Argentina and Brazil
on Mexican fields. Kudos to the team
and the boards for making it possible
despite the COVID challenges while
providing encouragement, guidance
and training to the players

Rayyan Pathan. From Ordinary To Estraordinary!