Formerly known as the Canadian Cricket Association, and now operating under its new name and structure Cricket Canada is the official governing body for the sport of cricket in Canada. It is a not-for-profit organization recognized by the International Cricket Council, the Government of Canada and the Canadian Olympic Committee.

As the sport’s governing body Cricket Canada’s unchanged mandate is to govern, develop and promote cricket across all regions of Canada. Under its current administration headed by Indian born Ranjit Saini, Cricket Canada has however developed a new, bold, strategic plan, the fulfillment of which it hopes will result in cricket regain its long lost formerly held stature it one as “Canada’s national sport!”

Having had a long and storied history in Canada, Cricket has within recent times transitioned to a modern, vibrant, growing sport, reflecting the changing face of the multi-cultural society the country has become. It is now played in all of the country’s Regions, all ten Canadian Provinces are members of Cricket Canada and there has also even been demonstrated interest in the Yukon and other territories. It is estimated that approximately 1,30,000 players and 820 clubs are represented by the Cricket Canada members, with the largest concentrations in southern Ontario, and the greater Vancouver area. 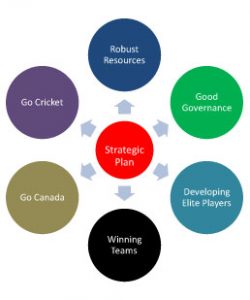 Cricket Canada’s current Strategic Plan Vision is for Canada to become a leading cricket nation through growing popularity, building a sustainable organization, and achieving international success. According to the Strategic Plan the realization of that vision will be structured on Cricket Canada’s construction of a six-pillar foundation.

Within the Plan, the six pillars which have identified as Robust Resources; Go Cricket; Go Canada; Winning Teams; Elite Player Development and Good Governance, each having specific objectives and identified initiatives, the achievement of which would realize their achievement and metrics against which progress can be measured. The overriding, structural, goals for each of the six identified pillars, not necessarily in any order of importance, are as follows:

Go Canada: To raise the profile of cricket through promotion and public engagement

Good Governance: To develop and maintain the highest standards of governance and financial management

Towards the achievement of its Go Cricket goal, Cricket Canada’s intent is to engage in the pursuit of infrastructure objectives such as developing coaches and officials; growing the game in schools; implementing junior club programmes and youth leagues, expanding domestic Leagues and establishing Women’s cricket. The specific initiatives, which will be implemented towards the fulfillment of these objectives include the development of city based youth programs; strengthening and expanding schools cricket; community and recreational based recruitment of coaches and officials. as well as securing the required funding for infrastructure development.

Cricket Canada’s pursuit of its Go Canada pillar goal will involve the fulfillment of objectives geared towards promotion and fan engagement, marketing, the development of online resources, as well as the management of its relationships with government agencies and the media. Several initiatives will be implemented as mans of fulfilling these objectives including improving the Cricket Canada: https://cricketcanada.org website; the development of streaming production; an increased social media presence; improved public relations, media, government, members and sponsor relationships and the development of a marketing strategy.

Needless to say the acquisition of Robust Resources will by extension be a prerequisite to Cricket Canada’s achievement of any of its other pillar goals. As such the development of a sustainable funding model, the diversification of funding sources and the maximization of existing revenue generating opportunities will be key objectives for the Association to fulfill. As a means of doing so Cricket Canada has identified several initiatives worthy of implementation. These include standardizing and operationalizing the qualification and application processes of the ICC, Sports Canada and other grant funding sources; developing the infrastructure required to support commercial events; establishing sponsorship revenue generation and sponsor management programs; implementing annual commercial event activities, increasing online revenues and review member fees and contributions.

Similarly as it pursues all of its stated objectives and seeks to implement the initiatives it has identified towards their fulfillment, Cricket Canada will at all times be required to demonstrate Good Governance in all of its activities. Transparency and accountability, the monitoring of progress towards the implementation of the strategic plan, the adoption of modern policies which surpass expected standards, the establishment of reporting and auditing procedures that ensure compliance, a risk management based approach to governance, financial management of the highest order which includes comprehensive controls, sound budgeting and budget tracking, internal and external audits, spending that is in line with strategic objectives and a quest for continual improvement will therefore all be objectives worthy of fulfillment towards the practice of Good Governance.

Among the initiatives which will be implemented towards the fulfillment of these objectives are the further development of Cricket Canada’s organizational structure including improvements to committee structure, annual reviews of the By-laws, Constitution, job descriptions and policies, the development and implementation of internal auditing processes.

Elite Player Development will be a key pillar towards Cricket Canada’s realization of its vision for Canada to become a leading cricket nation. Talent identification, development and retention, the establishment of Higher Performance infrastructure, the organization of high level competition, the retention of fully competent coaches and officials and the introduction of an accredited Academy system are the objectives will be pursued towards this goal. Among the numerous initiatives which have been identified as being required for implementation perhaps the most important will be Cricket Canada’s planned development of a player retention strategy which targets the successful transition of players from youth to senior levels, the establishment of senior player contracts and the post retirement retention of former players as coaches, scouts, selectors.

As the sixth pillar of its Strategic Plans Cricket Canada aims to develop Winning Teams as a means of delivering competitive success on the world stage. As a means of doing so it will seek to improve the performance of Canadian representative teams through the use of state of the art training techniques to develop and improve the physical and mental fitness of its players, their cricketing skills, and match preparation. The implementation of several training and progress monitoring oriented initiatives have been identified for implementation towards the fulfillment of these objectives.

As bold and lofty as it may be Cricket Canada’s Strategic Plan is fully worthy of the Association’s pursuit and a contributory involvement of all stakeholders towards its realization. Go Cricket, Go Canada!