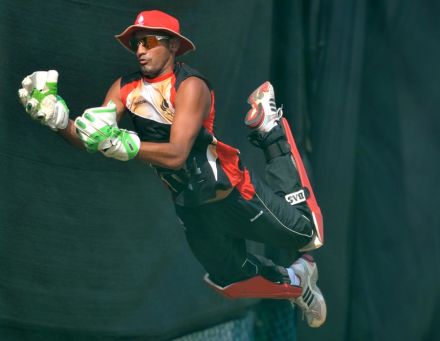 Canada’s National wicket-keeper
batsman Hamza Tariq copped the
prestigious Tournament Most Valuable
Player (MVP) Award at the conclusion of
the recently held Antigua hosted 2021 ICC
Men’s T20 America’s Qualifier. The 31-year
old Tariq was chosen for the award ahead
of his Canadian teammates Rayyan Pathan
and skipper Navineet Dhaliwal, who both
finished first and second respectively in the
tournament’s batting averages.

Tariq scored 199 runs in his five, undefeated,
tournament innings. His strike rate was a
phenomenal 207.29, by far the highest among
all of the tournament’s top batsmen. His three
posted half-centuries, which included his 63 not
out against Bermuda as his highest tournament
score were the most by any of the tournament’s
batsmen. He also struck 23 fours and 7 sixes in
his five innings at bat. Tariq also featured with
Rayyan Pathan in a 101 unbeaten stand for
Canada in its match against Panama which was
the highest of all second-wicket partnerships
during the entire tournament.

Tariq was also an important contributor to
the Canadian team’s fielding effort during the
tournament. As the team’s wicket-keeper
he took two catches and completed as many
stumpings.

Born in Karachi Pakistan, on July 21, 1990, the
now 31-year-old Hamza Tariq moved to Canada
with his family in November 2002, just a few
months after his 12th birthday. Somewhat surprisingly,
despite having been born in cricket-crazy Pakistan, it
wasn’t until after his family had moved to Calgary, three
years later in 2005, that he first became actively involved
in cricket.

There must have been something in the Calgary air
back then, as Tariq’s rise through the ranks of Canadian
cricket in the decade and a half plus since then has been
nothing short of meteoric. He represented Canada
at the 2009 ICC U19 World Cup and just a year later
donned Canadian National Men’s senior team colors for
the first time ever in a 2010 Caribbean T20 fixture against
Trinidad & Tobago T20. Having made his ODI debut for
Canada on August 7, 2011 against Afghanistan, he also
appeared in national colours in a T20 International two
years later in 2013 against Kenya.

Often described as one of Canada’s most promising
batsmen, Tariq has become known for his ultra
aggressive batting and for compiling scores that are
invariably boundary studded. Not surprisingly he has
identified the outstanding former Australian wicketkeeper
batsman, Adam Gilchrist, one of the very best
international cricket has ever seen, as his hero and the
cricketer whose deeds he tries to emulate.

Tariq has to date represented Canada in 21 T20
International matches. His aggregate for the 16 innings
he’s batted is 299 runs at a respectable 29.90 average.
His overall strike rate of 167.97 is even more impressive.
Tariq’s 2021 Americas Qualifier Tournament MVP award
is not the first occasion that he’s been among the top
performers at an ICC Tournament. He’d also emerged
as the most outstanding wicketkeeper
at the Namibia hosted 2018
ICC World Cricket League Division
Two tournament. His tournament leading
14 dismissals were five more
than his closest rival.

Tariq’s aggressive batting and
outstanding wicket-keeping have also
made him a recruitment target
for T20 international franchises.
He was initially drafted by the
Caribbean Premier League’s
Trinbago Knight Riders in 2016 and
subsequently retained for both the
2017 and 2018 Seasons. He has also
made appearances for the GT20’s
Winnipeg Hawks.

Tariq’s outstanding 2021 Americas
Qualifier performances, both in front
of the stumps as an aggressive batsman
and behind as an overly competent
wicket-keeper, should now increase
his attractiveness as a coveted T20
International player even more. No one
should be surprised, therefore, if from
this point onwards the demand for his
services increases even more than ever
before!