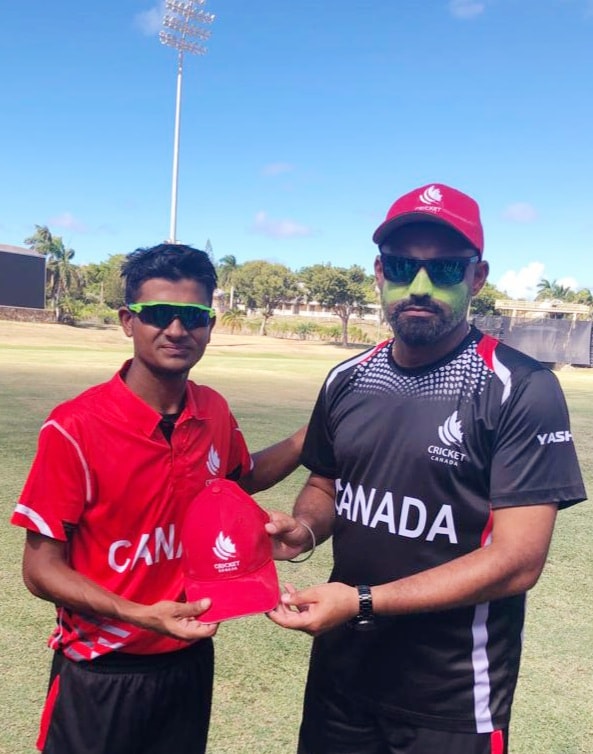 The final averages for the recently concluded
2021 ICC Americas Tournament which was
held in Antigua from November 7 – 15, was
a virtual Who’s Who of Team Canada’s players.
Canadians dominated both the batting and bowling
averages, occupied the top three spots for the
tournament’s highest batting partnerships, and also
topped the standings for the most catches held.

The tournament’s batting averages featured four
Canadians among the top 15 batsmen with the
most runs scored. Canada’s opening batsman
Rayyan Pathan and Skipper Navneet Dhaliwal
were at the very top of the standings. Pathan
complied an incredible 312 runs from his 6 innings
batted, 61 more than Dhaliwal’s 251 run aggregate
as his closest rival. Pathan’s innings included a
tournament-high 107* not out against Panama
as the completion’s only century. He ended the
tournament with an outstanding 78.00 average and
an equally impressive 164.21 strike rate. Pathan
also scored two additional half-centuries, while
striking 31 fours and 16 sixes in his 6 innings.

As Pathan’s closest rival for the tournament’s
batting honors, Canada’s captain Navi Dhaliwal’s
aggregate was 251 runs from 6 innings completed
for a 50.20 average. His runs, which included two
half-centuries and a 69* not out as his highest score,
were complied at a strike rate of 153.04. Dhaliwal’s
boundary tally was 26 fours and 12 sixes.

Fourth on the list with an aggregate of 199 from
5 undefeated innings, Canada’s wicket-keeper
batsman Hamza Tariq was also awarded as the
Tournament’s Most Valuable Player, his tally of 4
dismissals behind the stumps having contributed to his
nomination. Tariq’s three half-centuries were the most
by any of the tournament’s batsmen. As a result of his
not having been dismissed in any of his five turns at bat,
he ended the tournament with an infinite average. His
strike rate of 207.09 was also by far the highest for the
entire tournament. Tariq struck 23 fours and 7 sixes in
his five innings batted.

By his own previously established lofty standards,
Canada’s hard-hitting middle-order batsman Ravi Singh
had a relatively subdued Americas Qualifier Tournament.
Singh’s 141 runs from 5 innings batted (avg. 35.25) was,
however, still sufficient to place him at number 9 in the
batting standings and just within the tournament’s top
10! Singh struck 15 fours and 3 sixes for an overall strike
rate of 134.28

Three Canadians were also among the tournament’s top 10
wicket-takers. Debutant Salman Nazar had a dream start to
his Canadian T20I career. Nazar captured 10 wickets in his
four matches played to finish second in the overall bowling
averages. His 10 wicket tally was just one less than that of the
tournament leader Hernan Fennell who played six matches,
two more than Nazar.

Bowling his slow left-arm orthodox off-breaks the 30-year old
Nazar spun a web around his batsmen opponents. His 10
wickets were captured from just 16 overs bowled at a miserly
average of 7.40 and an even more impressive economy rate
of 4.93. He returned figures of 3/19 against the USA
and went even better by capturing 3/6 against
Panama in Canada’s final match of the tournament.

Bowling with outstanding pace, Canada’s Dilon
Heyliger captured 9 wickets at an average of 9.77
and a 5.64 strike rate. His career-best 5/16 taken
against Argentina was the tournament’s second best
individual bowling performance. That award
was won by Argentina’s Hernan Fennell who
captured 6/18 against Panama.

Saad Bin Zafar’s tally of 7 wickets from 19 overs
bowled at an average of 11.85 and with a 4.36
economy rate was sufficient to place him 9th among
the tournament’s top 10 bowlers. In Canada’s final
match against Panama Zafar returned the incredible
figures of 2/0 off four overs bowled. In the process,
he established a world record as the very first T20I
bowler to ever complete as many maidens in their
four allocated overs.

The Canadian’s fielding throughout the tournament
was also a notch above that of any of their
opponents. Ravi Singh took 6 catches to head the
tournament; standings and Hamza Tariq’s four
dismissals placed him fourth among the leading
wicket-takers.

Canada finished the tournament with five wins from
six matches played. Had it not been for the bizarre
final over events in their match against the USA, in
which they literally threw an assured victory away,
only to lose in the Super Over which subsequently
followed, that record could and should have been
an unblemished 6 wins and 0 defeats!

One To Watch: Parmveer Kharoud!