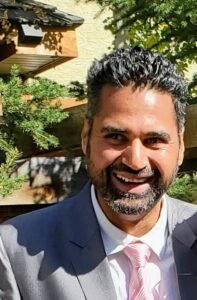 Born in Khandoor, a village in Ludhiana, India, Rubin Deol had a humble beginning. The insurgency in Punjab that developed between 1978 and 1984, brought a halt to the common man’s life. Despite the difficulties, Deol, however, could manage entry to a good school even during those difficult days. “Schooling set the direction of my life,” recalls Deol, President of Newfoundland and Labrador Cricket Association.

Deol was a school topper in his board examination. Despite his academic excellence, Deol was active in sports from his early years. With his towering height (193 cm), Deol always had an advantage over his teammates in soccer and volleyball. Cricket was not organized in his village, but young Deol developed a passion for the game, watching legends like Sachin Tendulkar and Anil Kumble on television. So inspired he was that Deol ended up organizing a cricket team in his village. But the challenge was to find a ground where the boys could play. Finally, they zeroed in on a Kabbadi ground. “We had to hit those leg-side boundary shots to make them reach the line!” laughs Deol.

That was the beginning of Deol’s s love for Cricket. The camaraderie and teamwork in Cricket motivated Deol to carry on with the game. Over time, Deol became a fast bowler and a batting all-rounder. But Deol’s fast bowling career was cut short in 2002 due to a knee ligament injury he suffered while bowling fast around the wicket to a left-hander. That saw the end of Deol’s bowling talent though he continued playing as a batsman besides playing soccer.

His professional life began in 2004 when Deol received his degree in Instrumentation Engineering from NIT Jalandhar. Deol finished his MBA in 2016 from Rotman School of Management, and it was by a stroke of luck that he moved to NL for work in the same year. Since then, Deol has been active in the community (as the South Asian population has been growing) with young students/new immigrants moving to NL to start their new life. As an experienced immigrant and now a Canadian citizen, Deol dedicated his time to helping new community members settle in NL through a not-for-profit organization called the Friends of India (FOI).

Due to his injury and other commitments, Deol had given up on Cricket ever since he moved to Canada in 2013, but it became a reality again when he found the cricketing community developing in NL.

A devout Sikh, visiting the Gurudwara (Sikh place of worship) has been an integral part of Deol’s life. On a Sunday in 2019, while praying in the shrine, a fellow devotee suggested that Deol should get into Cricket administration. Deol interpreted this advice as a message from his God (Guru) and thus began a new chapter in Deol’s life. Rubin Deol became the President of NL Avengers and subsequently the President of Cricket NL in 2020. “I still feel that it was a “Rab da hukam” (the Divine Will) that I readily embraced. That emotion and humility still motivate me to keep going and keep on contributing to improve Cricket here.” states an emotional Deol.

Cricket NL, which is the governing body for the sport of Cricket in Newfoundland and Labrador, was already a well-established administrative body with sound policies and by-laws when Deol took charge as President. Deol ascribes this to the tireless work of David Liverman, a stalwart of Canadian Cricket and a tireless administrator and advocate of the game. But soon, Deol discovered that club rivalries and petty issues were coming in the way of the board functioning as one cohesive unit. So as President, Deol’s priority was to bring unity among the various club representatives.

But there were bigger obstacles in the offing. Deol’s tenure in the leadership role in Cricket NL turned out to be even more challenging by the COVID pandemic. Deol took over as President in the fall of 2020 and was left with a short summer league that year. “Our fall and winter leagues were stopped as per provincial health guidelines, and at one time, we wondered if we will ever get back to normal,” recalls Deol. Players were losing hope, but Deol and his team worked hard and worked with regulatory/health bodies to make a full season of summer outdoor cricket a reality in 2021,
when only very few provinces were able to play competitive
Cricket during those COVID years.

The next big challenge for Cricket NL was to acquire a permanent
storage (a 20ft container) for the equipment as the storage shed
was destroyed in a hurricane in September 2021. In November
2021, Deol’s team had the container arranged and placed on
the ground before the onset of winter, thereby protecting the
expensive equipment. Deol and his men accomplished this with
support from corporate bodies in NL and on account of Deol’s
successful network with them.

But still, a lot remains to be done, feels Deol. Currently, he is
working on a sustainable business model to operate an indoor
hardball facility in St. John’s. With a short outdoor season, having
an indoor facility for hardball cricket is an absolute must, feels
Deol. However, with a comparatively smaller membership base,
raising funds to develop an indoor facility becomes a challenge,
observes Deol.

Though separated by distance, Cricket bodies in Canada are
also facing similar challenges as Cricket NL, feels Deol. Besides
having a short playing season, the lack of professional players
impedes Canadian Cricket’s growth. “Most of our talented
cricketers are new immigrants to Canada who are still finding
their feet in Canada. For them to leave everything aside and play
Cricket is a challenge.” shares Deol. “Corporate sponsorships
for individual players can play a big role.” Cricket is poised for
growth in Canada, and the time is ripe for us to engage the
corporate sector in this sport with a long-term partnership.” he
states.

Cricket NL has been an integral part of Cricket Canada
under the thoughtful guidance of Dave Liverman earlier.
Currently, Cricket NL wishes to carry forward late Dave’s
work and help Cricket Canada take the sport to the
next level by engaging professionals or volunteers with a
corporate background to present Cricket as a complete
marketing package to a long-term partner. Deol sees a
huge opportunity in this and a big role for him in partnering
with Cricket Canada.

Women’s Cricket and developing young talent are the
two missions that Deol has been passionate about. In the
recently held National T20, Akashdeep Singh was perhaps
the youngest captain among all the giants of Canadian
Cricket there. “That will remain our (Cricket NL) strategy
going forward as well: To place a young, energetic and fit
team in these national level tournaments as well.” affirms
Deol. Women’s Cricket, too, is the key to raising the profile
of the sport in Canada, feels Deol. “We have to follow the
example of soccer. Success will come once we have a
bigger pool of players to select from Focus and target for
coming years.”

A business professional with nearly two decades of
international and Canadian experience in the Energy sector,
Rubin Deol has even bigger dreams for NL, to develop
outdoor infrastructure in secondary cities like Corner Brook
and GFW of NL and an indoor facility in St. John’s.

And in the process, he remains a humble follower of his God
who preaches,” Mann neeva matt uchi” (drop your ego
and live with high morals and humility).