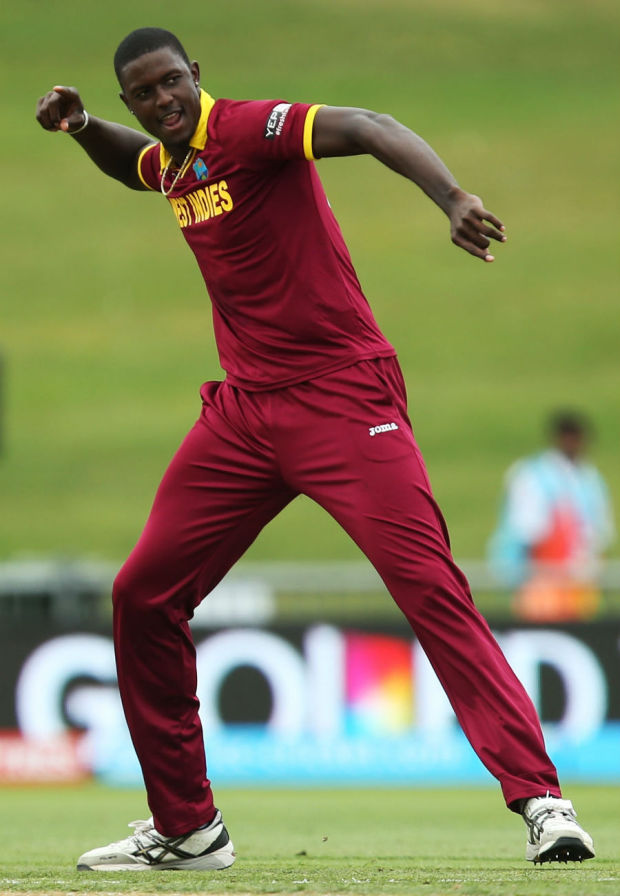 Jason Holder has fast become one of cricket's hottest properties, but on a numbingly cold day in Northampton — home for the next few weeks — it doesn't immediately feel that way.

Holder recently touched down from Barbados ahead of an eight-match county stint which he hopes will prepare him for this summer's World Cup. It's 40 years since a West Indian, Clive Lloyd, lifted the trophy. And Holder, in between trying to sound nonchalant about the spring chill, knows Lloyd's illustrious history. And — more than anything — is relishing the chance to make his own.

'I'm very optimistic,' he told Sportsmail. 'I think we've got what it takes to win the World Cup. It's just a matter of the cricket we play. We've potentially got match winners on any given day and we can beat any side in the world.

We're confident that once we formulate our plans and execute them we'll be up there lifting that trophy at the very end.'

Holder speaks from a position of strength. In January, he scored a brilliant double-century on his home island to help West Indies crush England in the first Test, before leading them to a series-clinching win in Antigua.

He doesn't agree England were complacent: that would be an insult to his own team. He just thinks they were outplayed. West Indies then shared the one-dayers 2-2, becoming the first side to deny Eoin Morgan's team victory in a bilateral series for three years.

To cap it all, Holder is the No 1 all-rounder in the ICC Test rankings, leaving the likes of Ben Stokes in his wake. For West Indies, the conversation has changed — and their captain is at the heart of that.

'I don't think it's all sunk in yet,' he said. 'It was a surreal feeling scoring a double century in front of my home crowd. And competing against the No 1 one-day side in the world and pushing them right until the end says a lot about our potential.

Being the No 1 all-rounder is something I've worked towards. But I've always said that being No 1 while the team is eight or nine doesn't quite fit the bill for me.'

Two four-day and six limited-overs matches for Northamptonshire — whose previous West Indian overseas players include Winston Davis, Curtly Ambrose and Eldine Baptiste — will be followed by a one-day tri-series in Ireland, and the World Cup.

West Indies' path to the tournament is a story in itself. A year ago, forced by their lowly ranking to take part in the qualifying competition in Zimbabwe, they needed a fortuitous lbw decision against Scotland, quickly followed by some perfectly timed rain, to see them through. Winners of the first two World Cups, in 1975 and 1979, they almost missed out. As Holder puts it, with a touch of relief: 'It was highly pressurised, I can tell you that.'

Now, with Chris Gayle more destructive than ever at the age of 39, and the 22-year-old Guyanese batsman Shimron Hetmyer among the most talented hitters around, West Indies are being talked about as a decent outside bet. Throw in Shai Hope, Darren Bravo, Holder himself and an exciting seam attack, and the talk is not unreasonable.

Asked whether he thinks England or India — the pre-tournament favourites — stand the better chance, he says: 'It doesn't matter to me. I just think we've got the players to beat them. I quite like the underdog tag. It feels good to prove people wrong.'

Images of the bespectacled Lloyd holding aloft the World Cup on the Lord's balcony are part of cricket folklore. In 1979, Holder was still 12 years away from being born, but these days counts Lloyd as a friend and mentor.

'Growing up, you track history,' he said. 'Clive Lloyd lifted the two World Cups, and it's up to us to try to achieve something similar. He and I are very close. He's given me a lot of advice about how to go about my international experience. He always said to me that it took three years for him to understand how to play Test cricket. Having played Test cricket for a while, I realise what he meant.

'Our boys are probably not the finished product but we're definitely on the right path to becoming pretty good West Indian players. If we stick together for the next two or three years, the sky's the limit.

'And, being in England, this was the last place we lifted the World Cup. Who knows, maybe there's a script to be written there.'

Halifax Cricket League: Home Is Where The Heart Is!