Come summer in Halifax, they’re a familiar sight on the commons. Often wearing their team jerseys, with those distinct overhand “bowls” towards the wicket and rectangle-shaped bats. These are Halifax’s cricket players, representing various clubs, all are members of the Nova Scotia Cricket Association.

Amit Joshi is not only a die-hard fan and talented player, he’s also President of the Association. It’s a role that was waiting for him.

An accomplished player in India, when he moved to Canada 15-odd years ago for school Amit figured his cricket playing days were behind him. “I thought cricket was done,” he says “like, who would ever play cricket in a place like Halifax?”

Even when one of his classmates told him “they play cricket here!” he assumed it wouldn’t be at the level he was accustomed to. Then, one bright summer day out on the commons, he was overjoyed to find a group of people immersed in a serious game, and he joined in.

“It was a pick-up league, more so” he explains, but he says he right away noticed the players’ passion and skill. He realized there was room for a more organized way for people to play his beloved sport in Halifax. And so, the Halifax Cricket League was born.

“From there we haven’t looked back,” says Amit “it has grown leaps and bounds.” Today, the Nova Scotia Cricket Association has more than 200 players, organized into 4 clubs (including the Halifax Cricket League.) Each club with their own board, teams and fundraising initiatives, Amit says the structure is “kind of like hockey.”

What’s interesting, though not surprising with cricket’s worldly origins, is that the majority of the players are immigrants, “we have Australians, players from England, players from India, Bangladesh, Pakistan… players from the Caribbean Islands as well,” says Amit. He thinks there might be representation from almost every cricket-playing country in the association, and says “we embrace the diversity.” 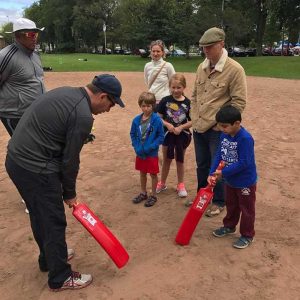 For many years, most of the players were also students. Amit describes how they would spend a few years playing on a team, and then would move elsewhere in Canada for work. However, the past several years Amit has noticed a wonderful development: What he calls “a core group of players,” have found jobs in Halifax, put down roots, and continue playing cricket every weekend. It was, in part, their love for the game, their team, and the built-in network of support, which influenced their decision to stay.

“Cricket can be a very social game,” explains Amit, “it’s a long game, which means you are with those players for a long time together.” When you spend enough time with a group of people, a natural bond begins to happen. Beyond the games and practices, they players spend time together socially. “They become friends, they’re part of the same community,” says Amit, “it’s a very, very tight group.”