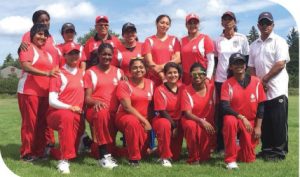 Miryam Khoker’s cricket career was essentially started sometime in 2004, when she was only four years old. Initially she was heavily inspired by her older brother who was either always in the nets with his coach or constantly palying cricket with their dad in the family home’s basement. Not surprisingly cricket kinda grew on Miryam.

Miryam started going to practices, playing and learning. At first it was kinda hard for her as she was always the only girl in the nets surrounded by much bigger boys. She was however really blessed to have had a coach like Derek Perera who always treated her just like any of his other players and if anything worked with her even harder.Derek continues to help Miryam grow not only as a cricketer but as a person as well.

Being a part of a club like Ontario Cricket Academy was relatively easy for Miryam to adjust to. It quickly became very familiar to her with the appreciation that everyone there treats each other as family. For a while, Miryam was playing to complete against the boys. She was never introduced to any other women who played, so she played in the TDCA league among the boys. 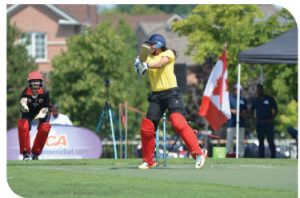 When Miryam was around the age of 11, the Toronto & District Cricket Association (TDCA)introduced for the first time, a Women’s League. In 2013, during a game against Tranzac, Mikaela Turik, the Canadain team captain at the time, introduced Miryam to George Coordinton and asked her to start coming to the national practices that were being run. Miryam also started practicing aliong with the boys at the Provincial HP Sessions during 2014 and continued doing so until last year.

In 2015 Miryam participated in Ontario Women’s first tour to Atlanta. A year later, in 2016 she toured England as a member of a joint North American team called CanAm and playing along side Clare Taylor who had also played U19 cricket at Essex and Middlesex. In 2017 Miryam was invited to attend a Philadelphia hosted CanAm Cricket Cam where England’s national Women’s Team players Suzie Bates and Charlotte Edwards were part of the coaching staff. At the conclusion of the Camp, Miryam was recognized as its best batter!. 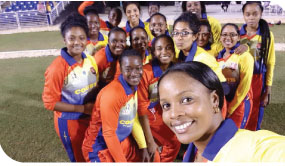 During the 2017 summer, Miryam was also recognized as the leading run scorer for the Scarborough Women’ League. In 2018 she was one of the four Canadians selected to go to Trinidad to play in the Court Grand Slam Franchise Tournament. During the Tournament Miryam played for the Tecu Titans alongside West Indies professionals such as Brittney Cooper, Shakira Selman, Merissa Aguilleira and Deandra Dottin. 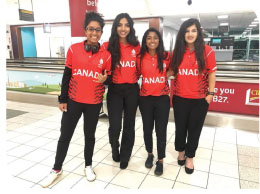 Miryam also captained A Select Allstars team that played against a visiting Secondary School Girls Cricket Team and received a Player Of The Match Award during the Mississauga Cricket Festival. This past summer she also was recognized as GTA’s “athlete of the week” on CP24.

To finish off what was unquestionably, to date. the brightest summer of her exciting cricketing career, Miryam was appointed as Vice Captain for the Ontario Reds team in the reintroduced Canadian National Women’s Championships.She was awarded the Player of the Match for the Final against Ontario Greens, which the Reds won handsomely. She is also the captain of her own club ,Ontario Cricket Academy’s women team  also the assistant coach for the girls team. 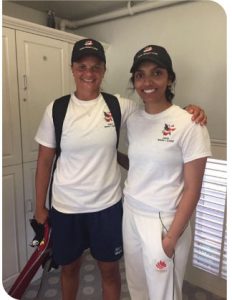 Recently this year, Miryam just got a sponsorship by Willow and Leather. She is currently in the National squad training for the ICC Americas taking place in May.