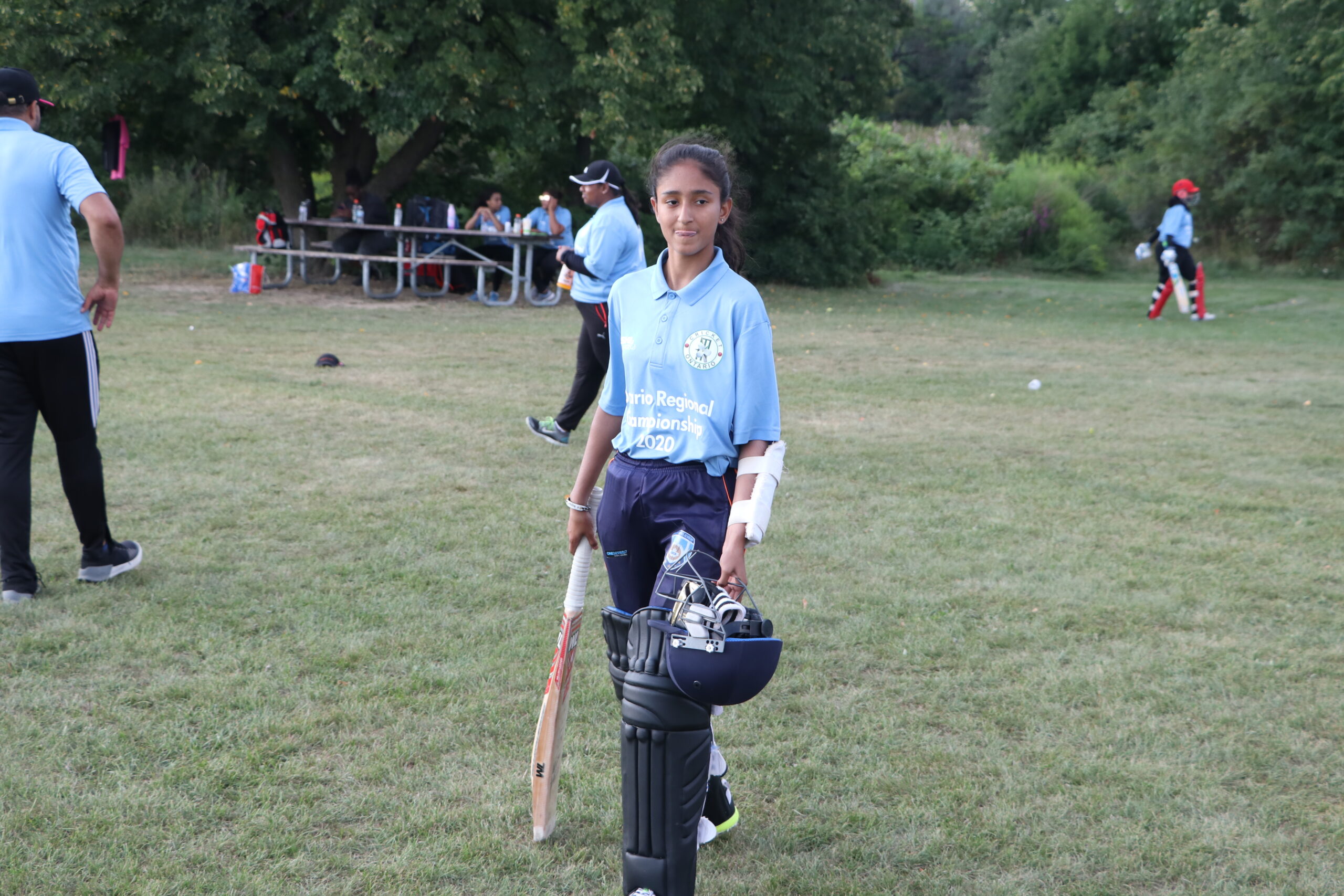 Identified by Achini Perera, herself one of Canada’s
most outstanding National players, as now arguably
this country’s brightest rising star, Rabbjyot Rajput is
as yet not even a teenager. She will be celebrating
her thirteenth birthday on July 9 of this year.
In addition to playing cricket as her favorite sport,
Rabbjyot is also pursuing educational studies in
International Business and Technology(IBT). Outside of
cricket her additional hobbies are tennis, sketching/
drawing and reading.
Born July 9, 2008 in New Delhi, India, Rabbjyot
moved to Canada with her parents in
October 2017. By then she had long
since become actively interested in and
involved with cricket, having started
playing in India with her brother Sovant
when she was just 7-8 years old.
After moving to Canada, Rabbjyot and
her brother both joined the Ontario Cricket
Academy. By the time she was 10 years old
she had become fully involved in playing
cricket with one of the Academy’s Coaches
Gary Grewal helping to improve her bowling
skills, while its Owner and Senior Coach Derek
Perera guided her batting skills.
Rabbjyot’s initial involvement in cricket was
heavily influenced by both her Dad Himmat
and brother, the former serving as the
primary source of interest on account of
his own active involvement as a player,
during his younger days. It was actually
Sovant’s decision to try to emulate their
father’s achievements that subsequently
prompted Rabbjyot to also become
actively involved as a player.
One To Watch

Having started her Canadian cricket involvement at the
Ontario Cricket Academy two years ago, Rabbjyot has to
date only ever represented that Club. As a right-hand top
order batter and right-handed medium-paced opening
or fist change bowler, she does, however, now harbor very
lofty ambitions of not only very soon becoming a Canadian
National Women’s player, but also those of taking this
country’s cricket to a much higher level than it holds at
present. Towards that end she also already participated in
the Ontario 2020 Regional Championships.
Not unlike any of her fellow Canadian Women’s cricketers,
Rabbjyot has been extremely frustrated by the lack of
actual playing time she has been allowed during the past
two seasons, as a direct result of the continuing COVID
related restrictions. She has,however, tried her very best
to make optimum use of the time by engaging herself in
exercises as a means of maintaining her fitness. Just as
importantly, she has also been diligent in practicing the
many cricket drills that she has been taught by her Ontario
Cricket Academy coaches. Most intelligently, Rabbjyot
has also engaged herself in watching a lot of cricket
matches on TV, focusing on the respective players’
techniques as a means of improving her own cricket
skills.
Rabbjyot’s continuous, highly laudable, quest
for self improvement in all three of the cricket’s
departments: batting, bowling and fielding,
has been geared towards allowing her to
make the very best of the actual playing
opportunities that will hopefully be presented
just as soon as the COVID restrictions are
lifted. Her primary objective is to perform at
a level that will capture the attention of the
Canadian Women’s cricket selectors as soon
as she possibly can, as a means of fulfilling
her ambition to become a member of the
National team. If she can indeed achieve
her objective in a sufficiently outstanding
manner, who knows she may become a
teenage prodigy and one of the youngest
ever women’s cricketers to represent
this country. Whatever the outcome
Rabbjyot Rajput’s continuing
career as a Canadian Women’s
cricketer will indeed be One To
Watch!

30 Plus Coaches And An ICC Accredited Video Analyst For Cricket Alberta!