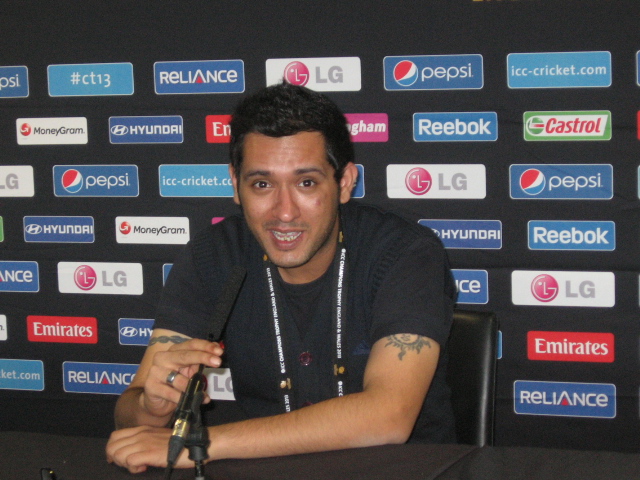 One To Watch: Rahul Vashishtha Looks To Build On Bradmanesque Season!

With the possible exception of boxing or baseball,
no sport has developed its own language quite
like cricket. Cricket lexicon runs the whole gamut
from the quirky to the deeply philosophical, yet no adjective
in all of cricket parlance is as cherished as the one derived
from arguably the sport’s greatest practitioner – Sir Donald
Bradman. The term Bradmanesque has come to signify an
unparalleled dominance over the opposition. It’s also a nod
to the Australian legend’s Test batting average of 99.94,
which dwarfs that of any other cricketer to ever pick up a
bat in the sport’s near 150-year history, and is probably the
most revered statistic in all of cricket.
Rahul Vashishtha can look back at his 2020 season with a
sense of satisfaction, then, because his run last year was,
well, Bradmanesque. In the CricketNL T20 Summer League
and the 2020 T40 competition he averaged 97.50 and 109
respectively, and led his team the Avengers to an unbeaten
15-0 record in all competitions. In the T20 Summer League,
he scored 780 runs at 97.50 with a strike-rate of 191.65, and
his 11 innings yielded 4 tons and 3 half-centuries. In the T40
competition, he scored 327 runs at 109 at a comparatively
sedate (yet still blistering) strike-rate of 126 with 2 hundreds
and a fifty in the three innings.
His run of 14 innings this season read: 0, 92, 85, 6*, 71, 49,
108, 153, 104*, 105, 25, 103, 120, 85. His 6 hundreds this
season took his overall total to 18 tons over six years in
Newfoundland.
Funny, then, that the 27-year-old’s season began with a
second-ball duck. Bradman, of course, is also the owner of
the most famous second-ball duck in all of cricket history.
Going into his final Test innings at the Oval in 1948, needing
just a boundary to average over a 100 for his Test career,
he succumbed without scoring to unheralded England
leg-spinner Eric Hollies. Although it could be argued that
the imperfection of 99.94 has added to the number’s myth
more so than if it had the cold, mechanical-precision of a
round figure like 100. It lends an element of human fallibility
to Bradman, who was famously a cricketing cyborg even
before there was such a term (cyborg was coined in 1960 by
scientists Manfred Clynes and Nathan S. Kline).
Page: 10
While this season was the high-water mark, it is the
culmination of six years of sustained domination for
the right-handed batsman, who moved to St. John’s,
Newfoundland, in 2014. Cricket in Newfoundland has a
long history, dating back over 200 years, yet for the latter
half of the twentieth century and the first decade of the
new millennium you were more likely to chance upon a
forgotten history in the archives than actually find a game
being played. All that changed in 2010 when CricketNL
was founded.
David Liverman was one of the founding members
of CricketNL and has played a vital role in the sport’s
resurgence in the province. He’s donned many hats, from
administrator to coach, and has observed Vashishtha’s
development from close quarters. “Even when he first
arrived here you could see the raw talent and the natural
athletic ability. I think he was still a teenager then. Over
the years, he’s worked hard on his craft and you can see
that in the evolution of his game,” said Liverman.
He felt Vashishtha’s batting took a leap this past season,
one which saw him minimize risk and value his wicket
more. “He’s always been a clean, powerful hitter, but this
year he was more measured in his approach. He made
a conscious effort to play along the ground more and
would look for the big hits only after he was set,” he said.
Liverman was also encouraged by Vashishtha’s renewed
focus on his seam bowling, and sees a genuine allrounder
in him. For his part, Vashishtha produced with
the ball as well, and was the leading wicket-taker in T40
competition with 8 wickets in 3 matches, and top-10 in the
T20 Summer League with 12 wickets in 12 matches. “He
is one of the fastest bowlers in the province, yet at times,
his control would let him down. He needs to make minor
tweaks to get better accuracy, but he works hard in the
nets and I can only see him improving,” said Liverman.
His dream run this season also marked the end of an
enriching stint in Newfoundland, one that has seen
him receive call-ups for Cricket Canada’s National
T20 tournament as well be included in the draft for
the inaugural Global T20 and being named the Most
Valuable Player in the Eastern Canada T20 tournament
twice. Vashishtha credits much of his development to the
technical guidance and support he has received from
Liverman and former NL provincial coach Sentill Selvamani.
Vashishtha’s numbers do come with a caveat. Cricket in
Newfoundland is still at a nascent stage. The quirky 2013 comedy
The Grand Seduction parodies the interest and awareness the
average Newfoundlander has of cricket. Things aren’t as bad as
all that! Unlike the film, cricketers in the province don’t use oars
as bats, and the pads aren’t made of rope. However, the level
of play is still on an upward trajectory and doesn’t necessarily
match provinces in the mainland that have a wider talent and
resource pool.
That remains Vashishtha’s next challenge: To replicate his
success this season if given a chance to compete at a higher
level