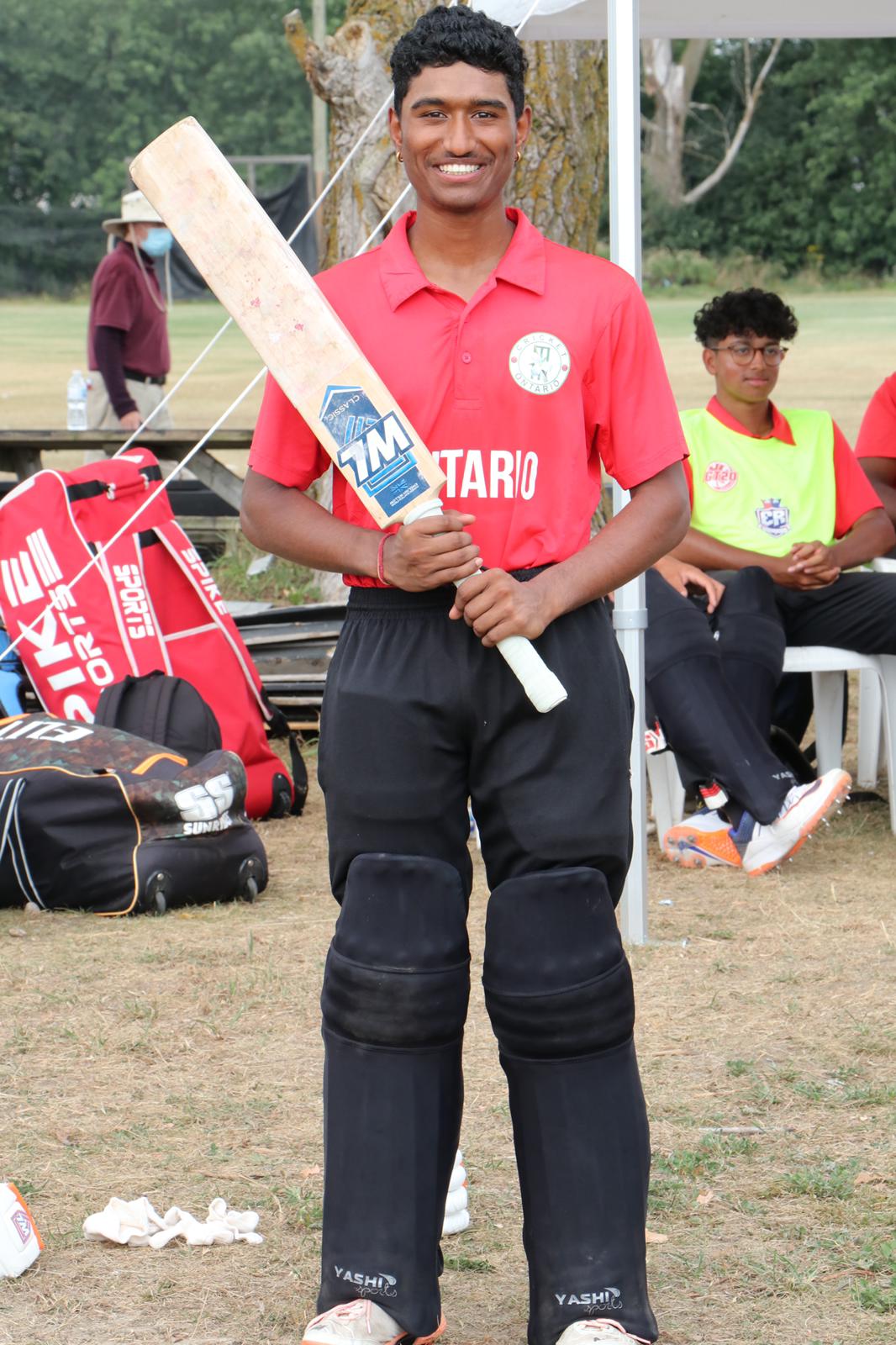 One To Watch: Siddh Ladd

Playing for Ontario Red in the recently concluded 2021 U18 Canada Cup. Siddh Ladd was the
team’s highest scorer. He scored 142 runs in four innings batted for a Tournament average
of 47.33 at an 86.59 strike rate. He also scored the Tournament’s first century,
a 108 ball 105 against the Prairies Combined that included 14 fours and
2 sixes.
Born in Gujarat, India, Siddh and his family moved to
Canada in 2008, when he was just 4 years old. Siddh
first became interested in playing cricket two years
later at age 6. He started playing with his Dad,
Logesh, in their family home’s basement. They
would be stuck down there for hours, until the neighbours started getting
concerned about the noise of the ball hitting the steel pole and ducts.
While playing their basement cricket, Siddh got hit on the leg many
times off of Logesh’s bowling. Whenever the weather allowed they
would also go to empty parking lots to play.
It was while he was playing in a Mississauga TD bank parking lot
one day, that Siddh first met the Ontario Cricket Academy’s
Owner and Head Coach, Derek Perera. After watching
Siddh bat for a while, Perera approached Logesh with
the suggestion that Siddh should get some professional
cricket training. As a direct result of that conversation,
Siddh became more actively involved in cricket at around
age 9 after he had joined the Ontario Cricket Academy. He
also journeyed to India shortly after and was selected for
a Baroda Cricket Association Camp, although he wasn’t
allowed to play any actual matches, because of his
Canadian Citizenship.
From then until now, the biggest influence on
Siddh’s cricket career development has been
Coach Derek Perera. Although, he has at times
also taken inspiration from the outstanding
accomplishments of a former Indian
batsman named Sachin Tendulkar!
Coach Perera inspired Siddh to start
taking cricket more seriously
very soon after he’d joined
the Academy. As part of his
Page: 16 wickets
development, Siddh also watched clips of Sachin Tendulkar’s batting with the intentions of implementing what he’d seen
into his own game.
Siddh’s now stated ambition, as a Canadian youth cricketer, is to represent Canada in the upcoming 2022 ICC U-19 World
Cup, which will be held in the West Indies early next year. His performances during the just concluded 2021 U18 Canada
Cup were therefore, geared towards attracting the Canadian National Selectors, all of whom were in attendance during all
five days of the Tournament. Beyond the U19 World Cup Siddh also harbors hopes representing Canada at the National
Senior level.
Siddh’s action plans to achieve his well established, most admirable, cricket career goals are to stay focused during each
of his practice sessions, while trying to improve further each and every day. He fully appreciates that in order to fulfill his
ambitions he will also have to perform well during his regular-season games for the Academy, as well as at any National
Tournaments that he participates in.
Based on his performances at the U18 Canada Cup, he’s now already fulfilled the second of those two objectives.
How he goes about fulfilling the first will definitely be worth watching. Siddh Ladd: One To Watch indeed!

The Dangers Of Distractions!