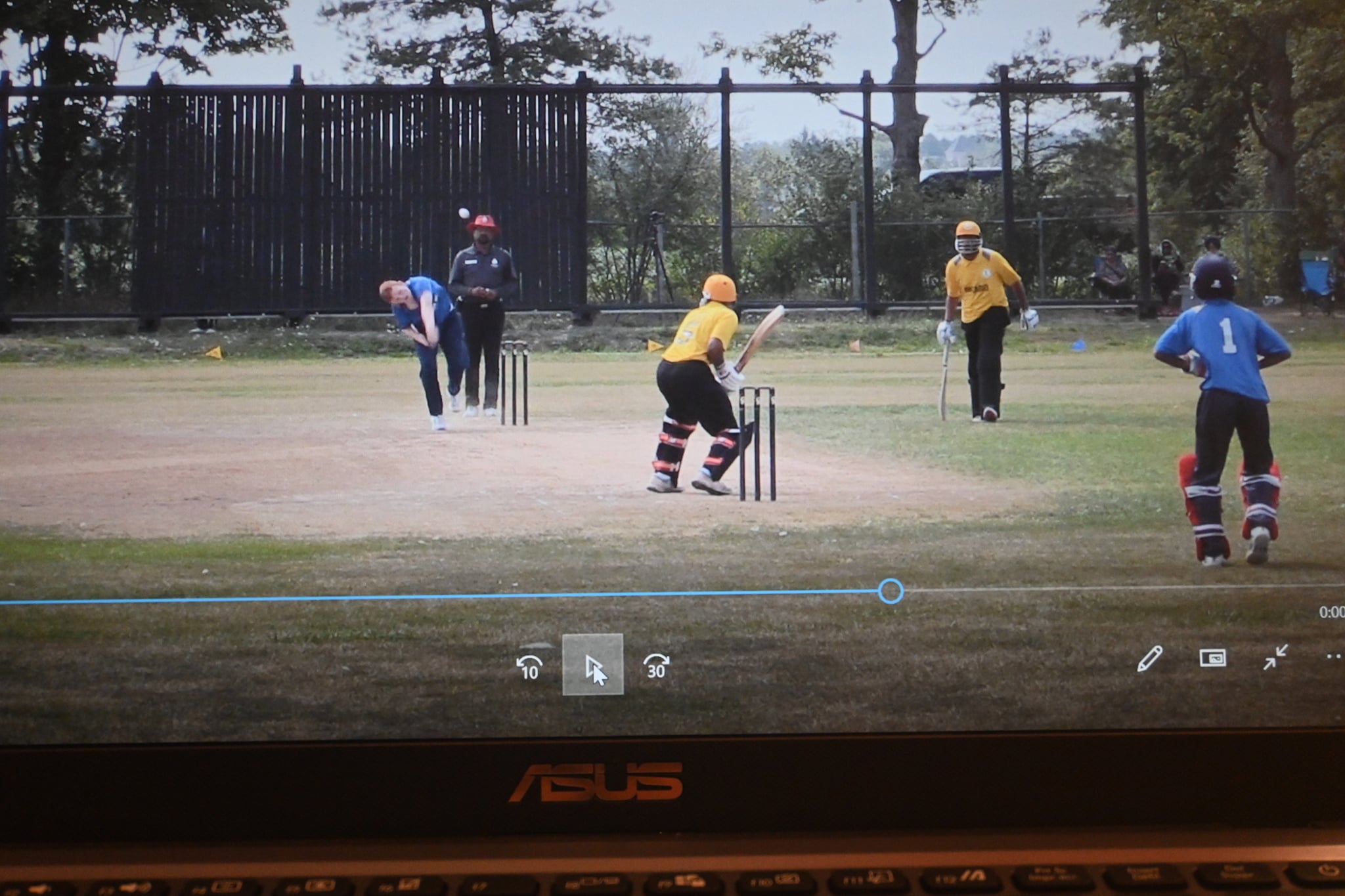 The Friday August 27, 2021 U18
Canada Cup final round clash
between the tournament’s
two until then unbeaten
teams, British Columbia (BC) and
Ontario Gold, was anticipated to be
a close, exciting contest. It turned
out to be a no-contest of epic
proportions as Ontario Gold stunned
BC with a massive 125 run victory. Set
a mere 149 for victory in 50 overs, BC
crumbled to 23 all out in 15.4 overs.
The result in the final day’s other match
was anywhere nearly that massive a
margin. The CC Development Team
batting first posted an admirable
236/9 in the 40 overs allowed, after
the start of the match had been
delayed and the overs reduced due
to the wicket having been wet by
overnight and early morning rains.
In reply the Combined Prairies could
only muster 89 before being bowled
out in 23.1 overs.
The aforementioned overnight and
early morning rains, had caused
the grounds to be switched and the
start of play delayed in the much
anticipated BC –Ontario Gold by an
hour and ten minutes. Once play
was started BC got off to a most
advantageous start, capturing the
first Ontario Gold wicket, Jash Shah
(2) with the score on 9 and eight more
by the time it had reached 99.
At 99/9 off 24.4 overs, Ontario Gold
were in serious trouble and BC
seemingly in total command. Kairav
Sharma’s unbeaten 35 ball 38, which
included 5 fours and 1 six, however
guided the Ontario Gold lower order
to add a further 49 runs for the last
wickets, before the innings was ended
in the 34th over with the score on
148/10 (33.1).
Set a mere 149 to win with the full
50 overs available, and at a run rate
of 3.0 runs per over, BC suffered an
implosion of monumental proportions
to the rampant Ontario Gold bowlers,
Sheel Patel and Kairav Sharma. Patel’s
first victim was the opener Jordan
Matthews, lbw for 2 off the second ball
of his third over. He went on to claim
five more victims in as many overs.
Patel finished with the incredible
figures of 6 wickets for 8 runs in 8 overs,
which included 2 maidens.
Patel was ably supported by Kairav
Sharma who captured 4 wickets for
10 runs off of his 3.4 completed overs.
Together they completely demolished
the BC innings for just 23 all out in 15.4
overs, to give their Ontario Gold team
a comprehensive Championship Title
win.
While Ontario Gold was busy running
roughshod over BC, the Cricket
Canada Development Team was enjoy
similar advantages over the Combined
Prairies, albeit in a somewhat different
manner. Batting first CC Development
posted 236/9 (40) on the back of Ashir
Zamir’s 52 ball 57. He was very well
supported by Abisarujan Arulth 36 (24),
Abhinav Dixit 34 (17) and Varun Bassi 33
(44).
Bowling for the Combined Prairies
Pawan Parekh captured 3-27/8. There
were also two wicket hauls for Aditya
Odedara 2-24/8 and Gurshaan 2-40/6.
Chasing 237 for victory, at a very
challenging run rate of 5.92, Combined
Prairies lost their opener Virjot Singh (0)
off the very first ball of the innings. From
1-0 they recovered partially to 33-2,
thanks to a partnership between Mejraj
Chahal 36 (48) and Aditya Obedara 5
(23). Three runs later Hermant Saini fell,
bowled by Finley Dixon for 3.
From 36-3 they progressed to 66 before
losing their fourth wicket, that of Dave
Jairath for 1o. The last 6 wickets then
fell for the addition of only 23 runs as
the innings folded for 89 all out in 23.1
overs, to leave the CC Development
Team victorious by 147 runs.
At the conclusion of the CC Development,
Combined Prairies match there was a
presentation ceremony of medals and
trophies to the outstanding players, as
well as the umpires and scorers. BC’s
Dilpreet Sing Bajwa was named as the
Tournament’s Most Valuable Player.
Bajwa scored 213 runs from 4 innings at
an average of 71.00, He also captured 18
wickets at an average of 5.17 and a 2.33
economy rate during the Tournament.