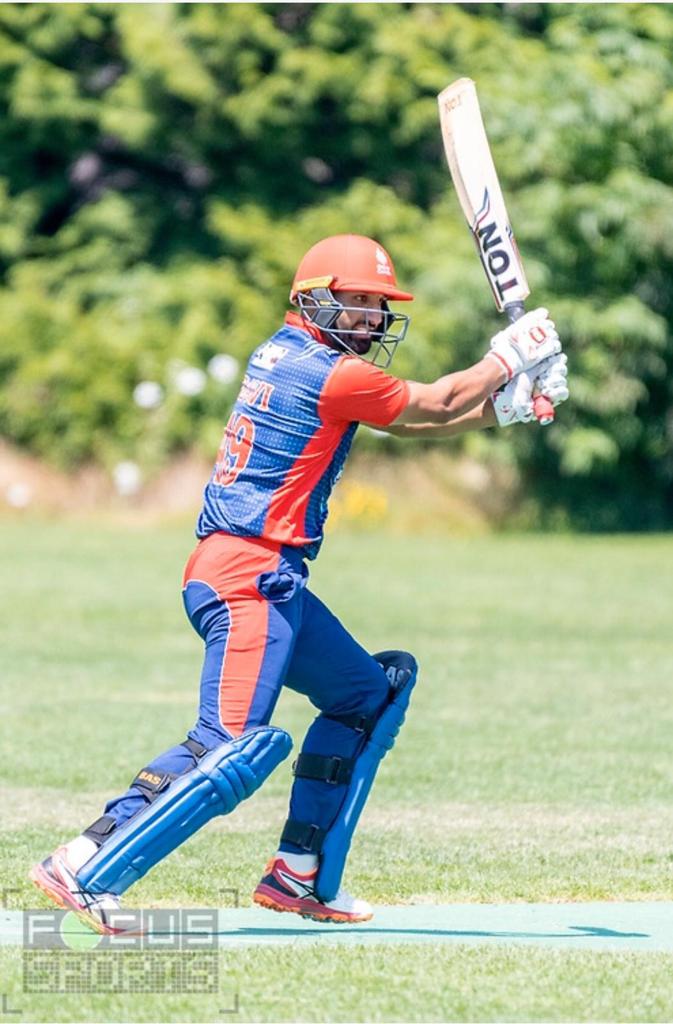 A totally unexpected COVID-19 positive test result has left Canada’s Ravi Singh alone and quarantined in his hotel
room. That’s where Singh unfortunately found himself on November 26, while his Colombia Kings teammates were completing an exciting super-over win over the Kandy Tuskers in their opening match of the Inaugural 2020 Lanka
Premier League (LPL).
As the only Canadian selected to participate in the LPL, Singh was however hopeful that his subsequent follow-up
tests, scheduled to be completed within days, would be negative. Such a result would serve to reverse the prohibitive
effect of the initial positive test, thereby allowing his participation in the Tournament. Hopefully even
in time for the Colombo Kings December 1 match against the Dambulla Vikings, their third of the
Tournament.
Singh’s selection as the lone Canadian player for
the Inaugural LPL, just the latest international T20
Tournament addition to the already saturated
annual global white-ball cricket events
calendar, wouldn’t have come as much of
a surprise to anyone who has followed the
development of his career. Born 14 October
1988 in Punjab, India, Singh who plays for
Canada as an aggressive to order righthanded
batsman, marked his August
18, 2019 Twenty20 International (T20I)
against the Cayman Islands with an
explosive century! He scored 101 runs
from 48 balls to become the first ever
Canadian batsman to score a century in a T20I match. In the process
he also became the first ever cricketer to score a century on his T20I
debut.
Prior to making his T20 International debut, Singh was, in April 2019, named in
Canada’s squad for the ICC World Cricket League Division Two tournament
in Namibia that year. He made his List A debut for Canada against
Papua New Guinea in the 2019 ICC World Cricket League
Division Two tournament on 24 April 2019.
In June 2019, Singh was selected to play for the Toronto
Nationals franchise team in the 2019 Global T20 Canada
tournament. In September 2019, he was named in Canada’s
squad for the 2019 Malaysia Cricket World Cup Challenge League
A tournament. Two months later in October 2019, he was named in
Canada’s squad for the 2019 ICC T20 World Cup Qualifier tournament
in the United Arab Emirates.
Singh’s rise to both Canadian National and Lanka League international selection may have been predicted by his
expressed interest in cricket at a very early age. Growing up in India as a twelve year old cricket prodigy, he was invited
to participate in a friendly match that was scheduled to get underway at 7:00 am. Accompanied by his father who by
then had been fully drafted into a prescribed role as Ravi’s cricket match attendance chaperone, he showed up at the
Coordinator’s house 3:30 am for his transportation to the ground.
Singh played junior cricket in India and was good enough to be invited to attend the country’s National Cricket Academy
in 2012, just prior to his immigration to Canada. Having arrived in Canada, Singh settled in Vancouver becoming
almost immediately involved as a player in the British Columbia Mainland Cricket League (BCMCL).
It was his consistent annual outstanding BCMCL League performances, as well as those for British Columbia in
Provincial Tournaments, that eventually caught the attention of Canada’s National Selectors. Since his August 2019
debut, Singh has to date played in 12 T20 International matches for Canada, scoring 266 runs from ten innings at
a respectable average of 33.25. His ten innings have included one century, as well as a half century. Singh’s 7 List A
matches for Canada so far have yielded 265 runs, from as many innings. at a commendable 53.00 average and a 94
highest score.
Now regarded as an established member
of Canada’s white-ball cricket teams,
Ravi Singh’s expressed ambition is
to play a pivotal role in the desired
success of his adopted homeland’s
continuing quest for ICC World Cup
Qualification. In both the T20 and
50 Over formats. He also hopes to
help Canada regain lost Official
ICC ODI status.
As part of that process, pending
the anticipated negative test result
clearance for his participation, Singh
will be hoping to receive sufficient
actual LPL playing opportunities as to
allow the full expression of his talented
and explosive batting. All of Canada will
be following his progress with every hope
for his outstanding success in his quest for
LPL glory.
Go Ravi! Go Canada!

One On One David Liverman Cricket Canada Vice President!