My cousin C (Cyril) Aubrey McWatt, transitioned on Monday, July 26, 2021, just eight days short of what would have been his August 3rd, 2021 seventy-eight birthday. Like me he was an only son, his father Cyril Beresford McWatt, known as Dick, and “Fel Fel” was one of my own Dad’s two elder brothers.

Born August 3, 1943 in what was then British Guyana but later became first an independent country under the name Guyana in 1996 and subsequently in 1970 a Cooperative Republic under the same name, Aubrey the second of Dick and Eileen McWatt’s (nee Campbell) three children. As the only boy his birth was sandwiched between those of his two sisters, Elizabeth the eldest, and Marilyn who was the youngest of the three.

Growing up a teenager in Georgetown, his birthland’s capital city, Aubrey’s secondary school education was at Queen’s College which at the time was widely regarded and acknowledged as the country’s very best. Unlike his father Dick, who during his own QC student years had been one of the most outstanding cricketers the school had ever produced, Aubrey showed very little if any interest in the sport.

Aubrey’s relative lack of interest in cricket was actually the primary exception to the list of quite a few things he and I had in common. We were both the only sons of our respective fathers. Our first name Cyril was not only identical but also in later years, influenced perhaps by the mutual distaste we both had for it, was subsequently shortened to just C, whenever the need arose for it to be written. He therefore would write his name as became C Aubrey McWatt, while I invariably wrote mine as C Anthony McWatt.

Being referred to by our middle names, Aubrey for him and Tony as the shortened version of Anthony for myself, instead of our first name Cyril was yet another of our commonalities. So to0 was our respective subsequent mid-life decisions to become creative artiste oriented self-entrepreneurs. Aubrey after having spent years working as a Sales Representative for the US Corporate giant Pfizer became a commercial artist, a poet, and with the publication of his autobiographical novel Red Man, a writer. My own career path was not dissimilar! Western Union and MoneyGram International were the two US-based globally established corporations I’d worked for prior to my own subsequent progression to self-entrepreneurship as a Publisher-Writer for several Canadian community newspapers and cricket-oriented magazines.

Before either Aubrey or myself had come along to grace life with our respective presences, the McWatt family name had in Guyana and even further abroad become well associated with cricket. As a wicket-keeper batsman of some repute my own father Clifford “Baby Boy” McWatt, eventually went on to represent Guyana as well as the West Indies. He was good enough in both disciplines to be now still regarded as one of the very best Guyana has ever produced.

As previously indicated Uncle Dick, Aubrey’s dad, was also in his own rights a very accomplished cricketer, even good enough to have represented Guyana, had he been seriously inclined to do so. Derrick McWatt, a son of Dick and Cliffie’s other brother Percy, also made a name for himself as a cricketer while attending Queen’s College and even further abroad in England while he was there as a university student.

Like both Uncle Dick and Derrick, I also was good enough a cricketer to have represented Queen’s College at every available inter-school age level, as well as each of the National Divisions: Rothman’s, Northcote, and Wight Cup within which the school’s teams played during my (1970-1976) years as a student. Aubrey by contrast had claims whatsoever to any such representation.

His unique gift, which to the best of my knowledge has never been duplicated by any other member of the McWatt family, was as an artist. As a kid, he’d always enjoyed painting and he’d dabbled in it a bit during his young adult years but it was only much later post Pfizer that his immense talents really came to the fore. As means of further developing his natural talents, he’d also engaged in formal art studies at the Seattle Academy of Fine Art.

As was noted in his official Artist Bio: “His paintings, drawings, and sculptures are moved by an earnest, creative response to the human experience. His representations are influenced by exposure to the nations of seven countries in which he has lived and more than seventy others he has visited during an international business career of over thirty years. Aubrey paints from imagination and his artwork reflects a belief that the universe and everything in it including nature, thought and emotion are inherently connected!”

Aubrey’s unique talents as an outstanding artist were for me best exemplified by a painting he once did of my brother-in-law Aubrey Bryce, the former Guyana Olympian and National Cycling champ, racing. The painting was done as a replica of a simple 5”x &” photo that Aubrey the cyclist had given to his namesake the artist. 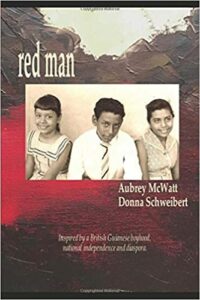 In what would ironically turn out to be the last of our personal similarities, Aubrey triumphed all the successes I have ever enjoyed in the now thirty-plus years since I started my own career as a writer by penning Red Man as an autobiographical novel. The reviews he received following Red man’s December 2019 publication are far more glowing than any I have ever recorded to date!