A week after Australia completed a dramatic series victory in India by winning their last three matches, ending a dismal run of 22 defeats in 26 completed one-day internationals, Shane Warne believes the team are once again striking fear into opponents and can be spurred to World Cup glory by the reintegration of David Warner and Steve Smith. 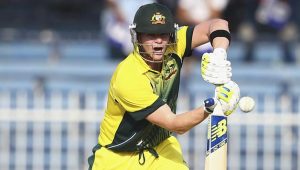 Warner and Smith’s 12-month bans for ball-tampering came to an end this month and they will be free to join up with the rest of the World Cup squad when they get together for a training camp in April.

I think Australia have just started to believe they can win again and I think other teams are now saying, ‘Hang on, Australia might have just found something,’” Warne said.

“Smith and Warner are going to be hungry, determined and excited to be back playing rather than worrying about answering questions. I think they’ll just be excited to get out and play and they’ll be determined to show how much they’ve missed the game and how good they are, and that could rub off on the team and take the team with them. I don’t think there will be any issue with Smith and Warner coming back.”

Having played in six of the past eight World Cup finals, including the most recent in 2015, which they won, Australia are unused to simply making up the numbers. They are third favorites for the competition, behind the hosts and the ICC’s top-ranked side, England and India respectively.

“Australia have been pretty ordinary for the last 12 months, I think they’ve played poorly,” Warne said. “But Australia perform really well in big tournaments. You add Smith and Warner back into that side and they’re going to give it a shake.

“England have so many match-winners. I love the style of cricket they play. They’re very well led by Eoin Morgan, and this is the best chance they’ve have had in recent times. India – anyone with Virat Kohli in their side has to be in with a chance, and their bowling attack is very good. So those two go in as favorites, Australia will be there as well, and I think the fourth [semi-final] spot literally could be any one of the other sides.”

Warne may be convinced Warner and Smith can flourish at the World Cup but he is also certain they will have to withstand constant abuse from the English crowds. “I’d be disappointed if the fans didn’t give it to them. They’re going to absolutely give it to them,” he said.

“Even if they hadn’t been out for a year, they were still going to get nailed by the crowd, the same as the Aussies give it to England when they go to Australia. They’re completely expecting it.”