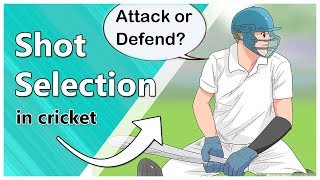 To build an innings, a batsman needs sound judgment to work out which deliveries to defend, leave or score runs off of.
As such Shot Selection is therefore the most important part of batting.
The following have a huge impact on poor Shot Selection.
• Pre-planned thinking.
• Scoreboard pressure.
• Over thinking.
• Lack of confidence.
• Over confidence.
• Pitch Conditions.
• Fatigue.
• Lack of fitness
This is not a complete list however as there can be many other
reasons of poor shot selection. Even top-class batsmen often
give their wicket away because of poor shot selection, so it’s
not an easy thing. As examples of this consider the following:
Sachin Tendulkar while on an Australian tour was getting out
consistently while playing cover drives. After three Tests of
low scores Sachin made up his mind not to play cover drive
at all. The Aussies were bowling
full and encouraging Sachin to
play the cover drive but Sachin
didn’t play his favorite shot.
In that particular innings
Sachin scored a double
century.
Rahul David was a
good player of pull shot
but on fast pitches he
always chose not to
play the pull shot at all.
Which shot to
select technical or
orthodox?
This a totally a debatable
question, the short answer
to which is that the choice
of which is the correct
shot to play in any
given situation is totally
dependent upon the
player himself! How
does he play? What is
his game plan? What
is his natural style? How
does he practice in the nets?
These are all factors which come into play for shot selection. In the end I would advise that batsmen should look
at the main shots and analyze when to play them. As I have always said “ Cricket is easy to learn but hard to
understand!.”
Simple decisions often have a huge impact on match outcomes. Not the least of those are batsmen’s shot selections!

WE WILL FINISH, AND WE ARE NOT GIVING UP: SHAH ZAFAR