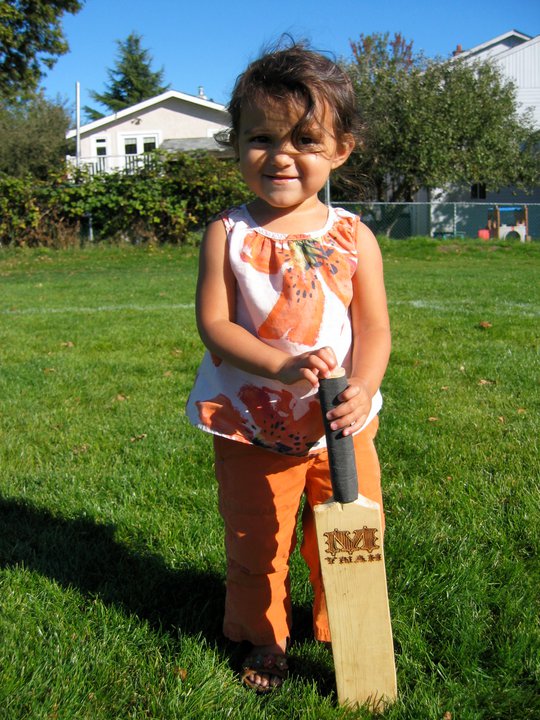 As a mere toddler, Mynah Thomas was gifted a handmade cricket
bat by her father Nagy. The bat was lovingly crafted from a two by-
four piece of wood by her father Nagy, who even went to the
extent of carving her name on it. The hand carved wooden bat
became such a favorite toy of Mynah’s that she took to bed with
her at night, cradling it in her tiny arms as she fell asleep!
Now 11-years-old, Mynah’s love for and involvement with cricket
has progressed to such an extent that she is already with elite
women twice her age. Last summer she was selected to represent
Victoria at Provincial State matches, the opposing teams for
which were comprised of women in their twenties, some even
older!
Mynah’s Dad Nagy is from the state of Kerala in the South of cricket
crazed India. Her mother is Canadian. They met when she was
backpacking in India 20 years ago. Having gotten married they
eventually settled in Vancouver Island to start their Canadian
family!
Vancouver Island was one of the very few jurisdictions that were
able to get clearance to play Cricket this year. The City’s officials
had approved a proposal put forward by the Victoria & District
Cricket Association resulting in an almost full season of Cricket.
As such Mynah did get to play a lot of Cricket this year. She also
participated in Nagy’s conducted training sessions that were fully
compliant of Covid advisories.
The opportunity to play her fair share of cricket this year, spite
of Covid, was very helpful to Mynah’s emotional and physical
well being during the pandemic. Nagy built a batting net in the
backyard of their family home. He also bought a bowling machine
for Mynah, which she took full advantage of during the lock down.
She spent a lot of time batting in the backyard nets against the
bowling machine!
Mynah grew a lot stronger physically last year and as a bowler
has been able to generate a decent pace for her age. She also
got her run and bowling action sufficiently sorted out as to allow
her to be consistent with her rhythm. She has also managed to
get her line and length right.
As a Coach Nagy focused on one thing for each of the
juniors under his coaching charge. Getting her line and
length right was the focus for Mynah. As a father he
however, left it entirely up to Mynah as to whether she
wanted to attend his training sessions. Not surprisingly
she attended all but one of this year’s sessions!
Mynah was one of Nagy’s most consistent bowlers this
year. Her batting was however, not nearly so, inconsistently
up and down depending on who was bowling. If the
bowler was able to bowl quick and with a good line and
length, Mynah is equally able to play. When the bowlers
are erratic, slow and loopy however, she struggles to play
proper cricket shots. Especially when the ball bounces
more than once to get to her.
Nagy says of Mynah that she is an easy person to coach.
She understands the variables and when things aren’t
working, is aware of what the problems are. As much as
their training is mostly about techniques, he constantly
brings it to her attention that cricket is also more than
often a lot about mental toughness.
As a father, Nagy however knows first hand exactly how
tough a child Mynah is and can be. He and her mother
have had their battles with her. She won’t do something
just because she has been asked to, she needs to know
why and there has to be a logical explanation. As parents
they have never ‘babied’ her. As a result she has learnt
to be her own person who needs a logical explanation
for everything. Her strength as a person is also only
surpassed by her kindness toward others. She is a very
compassionate person, very mature for her age with
an astonishingly refreshing ability to understand bigger
concepts.
Irrefutable evidence of Mynah’s big picture awareness
was illustrated by her wholehearted supported of Nagy’s
venture to try and find a new cricket field in Victoria.
There is an growing need in the City for new cricket
fields. Mynah championed the cause with Nagy by
writing to her school’s Principal with a request for his
consideration of the installation of a new cricket pitch
on the school field. Accompanied by Nagy, she also
met with the Mayor of the municipality to advocate for
the cause of additional cricket fields. She loves cricket,
vocally advocates for its continuing development and
even at her now very tender age already realizes her role
in furthering the future of women’s Cricket in Canada.
As multi-talented as she is, Mynah plays four or five
instruments, is part of the school band and also trains
in karate. As her very proud father Nagy therefore fully
appreciates that while she knows and loves her cricket,
she is sufficiently talented in a lot of areas and could
choose any one of those paths moving forward.
As for her cricket aspirations for the immediate future,
Mynah doesn’t really have any set goals, at least not for
now! She thinks that she would just like to continue being
involved with cricket to see where that goes, how she
does and who she ends up playing for and with. Mynah
also thinks that in the future she might have set goals
that she would want to reach but for now, she just wants
to play cricket as much as possible, to improve her skills,
have fun and most of all spend more time with her Dad.
Whatever her future choices may turn out to be her
evolving cricket career will definitely be One To Watch!

One To Watch: Faisal Jamkandhi!