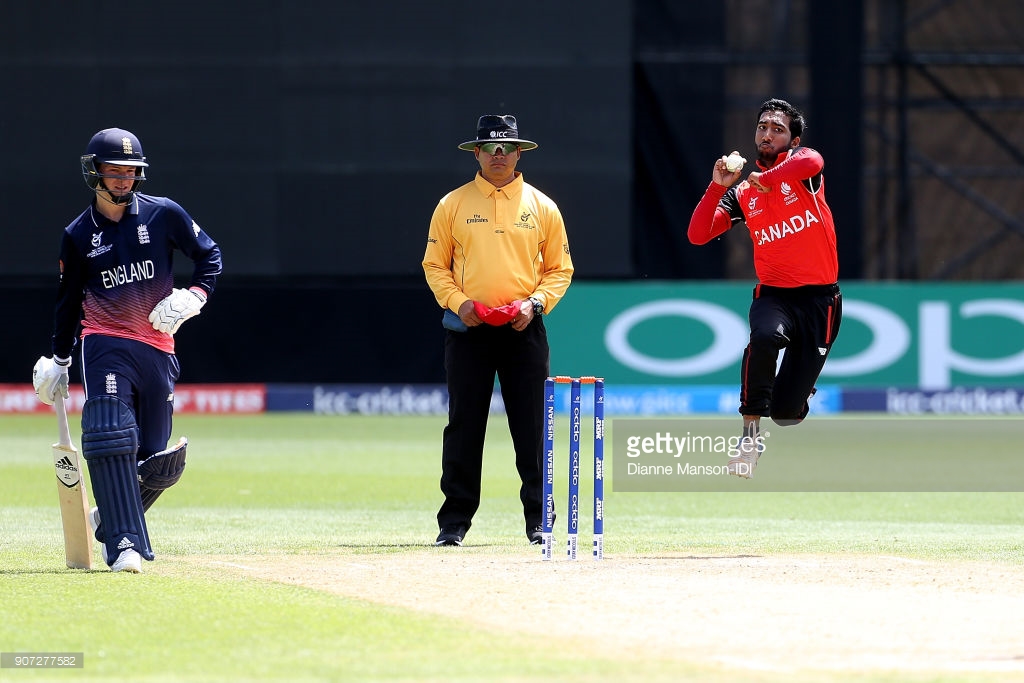 One To Watch: Faisal Jamkandhi!

Born on October 07, 1999 Faisal Jamkhandi grew up
playing ice hockey. He readily confesses to not having
known what cricket was until at age 11 he was invited
to play it with some family friends during a park gathering.
His enjoyment of that introductory experience was however,
sufficiently immense as to prompt an immediate search by
him and his Dad for a shop at which he could buy his own
cricket bat!
Having eventually found such a shop, Faisal was further
delighted to see a bunch of kids his age engaged in cricket
practices at a facility that was virtually just next door. Within
a week Faisal had become a member of the Qasra Cricket
Academy.
Thus began a Canadian Junior, now Emerging Player,
cricket career that can now only rightfully be described as
“outstanding!” Within five years, Faisal’s talents as a rightarm,
fast medium bowler and right-handed, middle
order, batsman had developed to the extent that he
was selected as a member of the Ontario Provincial
U19 Squad for its tour to California. Between the ages
of 15-16 he also toured Barbados with the Oakville
Cricket Academy to play in the annual Sir Garfield
Sobers U19 Tournament.
Faisal’s meteoric development as a junior cricketer
continued with his selection to the Ontario Reds which
participated in the U16 and U17 Canada Cups, held
respectively in Winnipeg and Toronto. He was selected for
the Canada High Performance Team’s 2016 Tour to Bermuda.
He also engaged in cricket related overseas travel. First to
England for an Ian Pont led 10 day training Camp, then more
impressively, if not importantly, to Barbados for a 2 week
Camp with the world renowned former West Indies Test
and ODI Opener Desmond Haynes! He had also consistently
spent his Canadian winters in India, training in Pune under
the watchful eyes of Coach Surendra usually for periods of
3-6 months. Faisal did so consistently from 2015-2017 and
again just prior to the 2018 ICC World Cup.
Selected for Canada’s U17 tour to Houston, Faisal also
donned his Canadian National colors for the Toronto
hosted U18 America Qualifier matches against the USA
and Bermuda. Just after those Qualifiers he participated
as a Canadian Team Member in the St Kitts hosted
Cricket West Indies August 2017 U18 Super50 Tournament.
With such an impressive resume of participation at the
highest levels of junior cricket, including his two-year (2016-2018) involvement as a member of Canada’s National U19 teams, his subsequent selection
to the Canadian Squad for the New Zealand hosted 2018 ICC U19 World Cup was of no surprise to anyone!
At the 2018 World Cup, playing against the worlds’ very best U19 cricketers, Faisal Jamkhandi emerged as
the Tournament’s joint highest wicket-taker. He captured 14 wickets in the 6 matches he played for Canada
during the Tournament.
The two years since Faisal’s impressive 2018 ICC World Cup Tournament performance have witnessed the
further development of his career, in an almost equally impressive manner. Playing for the Mississauga
Ramblers in Canada’s most competitive and highest ranked, Toronto & District (T&D), Domestic League he
returned bowling figures of 6/12 during an August 18, 2018 Super 9 match against Victoria Park C.C. He ended
the 2018 T&D Super 9 Top Division Season with an impressive tally of 15 wickets from 10 matches at a 15.8
average.
Drafted by the Winnipeg Hawks for the Inaugural 2018 Global T20 Tournament, he also participated in the
2019 edition as a member of the Brampton Wolves.
The development of Faisal Jamkandi’s impressive cricket career was duly rewarded with his selection for the
Canadian National Men’s Senior Team for its scheduled March 2020 Tour to Malaysia for the ICC 2023 World
Cup Qualification Tournament. Unfortunately as a direct result of COVID-19 the Tournament was subsequently
cancelled. When the time eventually comes for its most likely rescheduling in 2021, Faisal Jamkandhi’s name
will be expected to be high amongst those likely to be considered for selection to the participating Canadian
National’s Men’s Senior team. A development which will undoubtedly be “One To Watch!”