New Zealand’s awesome batsman Brendon McCullum, West Indies fabulous all-rounder Kieron Pollard and India’s sixer Yuvraj Singh are the Toronto Nationals marquee players for GT20 Canada 2019. McCullum and Singh will be making their first appearances in Canada while Pollard will be returning for his second season. 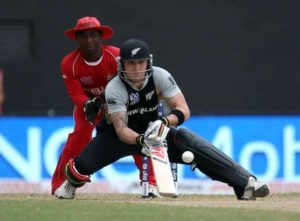 Brendon Barrie McCullum ONZM (born 27 September 1981) played all formats and captained New Zealand in all forms. He is considered as one of the most successful batsmen and captains of New Zealand cricket.

McCullum was the first batsman to score 2 tons in t20I. He was the previous record holder for the highest individual score in a Twenty20 International (123 against Bangladesh in 2012) and third highest individual score in all Twenty20 cricket (158 not out for the Kolkata Knight Riders against the Royal Challengers Bangalore in 2008). He played for the Kolkata Knight Riders from 2008–2010 and again from 2012–2013, while in between he played for the Kochi Tuskers Kerala. He played the 2014 and 2015 seasons for the Chennai Super Kings. McCullum was a wicket-keeper until 2013.

He retired from all international cricket on 24 February 2016. 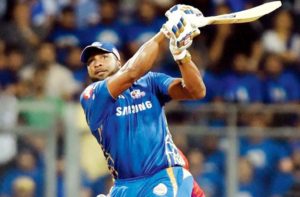 Trinidadian born Kieron Adrian Pollard (born 12 May 1987) plays for the West Indies as an aggressive all-rounder. Pollard is a medium-pace bowler and big-hitting batsman in the middle-order. After shining during the 2009 Champions League, he was signed by both the Southern Redbacks and Somerset for their domestic Twenty20 campaigns. He was the joint highest paid player in the 2010 Indian Premier League, playing for Mumbai Indians. He is one of two players to play over 100 ODIs and never play a Test match.

Pollard’s impressive performance in the 2009 Champions League Twenty20 and the Big Bash led to him being one of the most sought after players at the 2010 IPL auction. After some aggressive bidding, the Chennai Super Kings, Kolkata Knight Riders, Mumbai Indians and Royal Challengers Bangalore all bid the maximum allowed; $750,000. A ‘silent-tiebreaker’ was won by the Mumbai Indians.

Kieron Pollard made his debut for Mumbai Indians on 17 March 2010 against the Delhi Daredevils at Feroz Shah Kotla in Delhi.It took a while for him to get off the blocks in his very first season. He however proved his money’s worth in the latter stages of the tournament with a blistering 13 ball 45 laced with 5 sixes and accounted for 2 run outs earning him his first MOTM performance. This was followed by a stellar performance against the Royal Challengers Banagalore in the semi final. Pollard smashed a quick fire 33* off 13 balls with 3 sixes and followed it up with 3 wickets and 1 run out. He was adjudged man of the match and his efforts propelled Mumbai Indians into the final for the very first time where they eventually lost to the Chennai Super Kings. For his performances in 2010, he was named in the Cricinfo IPL XI.

Kieron Pollard has been retained by the Mumbai Indians for every IPL Season since 2010. His outstanding performances with bat and ball along with his superlative fielding were instrumental in the Mumbai Indian emergence as 2019 IPL Champions.

Pollard was bought by Karachi Kings for US$140,000 in 2017 Pakistan Super League players draft. In a do or die match against Lahore Qalandars he scored 45 runs off 20 balls to help his team to stay in the tournament, later he was judged man of the match.

He was selected in the T20 XI of the year 2017 by Cricinfo He played for Multan Sultans in PSL 3. He was picked by Peshawar Zalmi in 2019 Pakistan Super League players draft.

In October 2018, he was named in the squad for the Dhaka Dynamites team, following the draft for the 2018–19 Bangladesh Premier League. In June 2019, he was selected to play for the Toronto Nationals franchise team in the 2019 Global T20 Canada tournament. 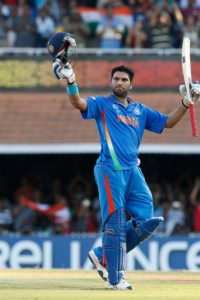 Yuvraj Singh (born 12 December 1981) is a former Indian cricketer who played in all forms of the game. An all-rounder who bats left-handed in the middle order and bowls slow left-arm orthodox, Yuvraj is the son of former Indian fast bowler and Punjabi actor Yograj Singh. One of the greatest limited over players to play for India, Yuvraj was particularly noted for his hitting of the ball and his fielding.

Yuvraj was a member of the Indian cricket team in One Day Internationals (ODIs) between 2000 and 2017 and played his first Test match in October 2003.

Yuvraj was the icon player and captain for Indian Premier League (IPL) team Kings XI Punjab in the first two seasons; in 2010, the third season, icon player status was discontinued and the captaincy given to Kumar Sangakkara. Yuvraj registered his first hat-trick in T20 cricket against Royal Challengers Bangalore at Kingsmead in Durban, the same ground where he hit his six sixes.

In 2011, Yuvraj was diagnosed with a cancerous tumor in his left lung and underwent chemotherapy treatment in Boston and Indianapolis.[2] In March 2012, he was discharged from the hospital after completing the third and final cycle of chemotherapy and returned to India in April. He made his international comeback in a Twenty20 match in September against New Zealand shortly before the 2012 World Twenty20.

At the 2014 IPL auction Royal Challengers Bangalore bought Yuvraj for an all-time high price of ₹14 crore and, in 2015, the Daredevils bought him for ₹16 crore making him the most expensive player ever to be sold in the IPL.

On 10 June 2019, Yuvraj announced his retirement from International cricket. In June 2019, he was selected to play for the Toronto Nationals franchise team in the 2019 Global T20 Canada tournament.