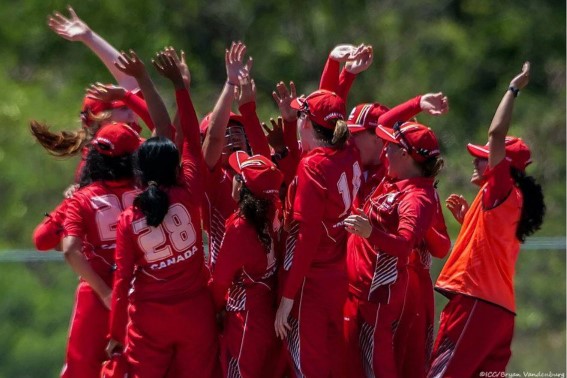 The inaugural Women’s National Championships was held at the Maple Leaf Cricket Grounds, King City, Ontario, from Sep 1-3, 2018. 3 teams participated in this tournament: A Western Province Team comprised of players from British Columbia and Alberta, Ontario Reds and Ontario Greens.

T h e  O n t a r i o  t e a m s  we r e coached by Coaches Faroukh K i r m a n i  a n d  S u t h e r s h i n i
S ivanantham , with Frank Persaud as Manager. The event began with a fitness test conducted by Daulat Khan. All players were put through a yo-yo test and other strength and agility tests.

Finals
The Ontario Reds were the top team winning both their preliminary games and the Ontario Greens with one victory, were the second team at the end of the League stage. Ontario Greens won the toss and elected to bat. Kadie Ramdath and Suboor Khan opened the batting for the Greens. Saniyah Zia and Amanjit Virk opened the bowling for the Reds with a couple of tight overs putting the Greens under pressure.

The Greens got a bit of a reprieve picking up 8 extras in the 3rd over but a direct throw from Miryam Khokhar fielding at mid-wicket saw the Greens lose their first wicket with the score at 15 (Kadie
Ramdath) in the 4th over. Terisha Bess was in next and both she and Suboor tried to dig in and consolidate. The first boundary came in the 8th over with Terisha Bess pulling Mahrukh Imtiaz towards mid wicket. That seemed to break the shackles for the Greens as Suboor Khan followed that up with a couple of strong hits to the boundary off Miryam Khokhar in the 9th over.

Skipper Nicole was quick to make a bowling change bringing in Anto Dency who immediately provided a break through getting Terisha Bess stumped by Nicole ( Score 45/1). She followed this up with
the wicket of Habeeba Bader in her next over and the Greens at the end of the 12th over were 58-3.

That brought the Greens’ Captain Mahwish Khan to the crease and she and Suboor steadied the innings with a partnership of 56 from 49 balls before she was run out on the first ball of the 19th over ( Mahwish Khan 25 of 26 balls with 2- 4's). Suboor Khan anchored the Greens’ innings with an unbeaten 28 of 52 balls with 2-4's. Greens finished at 117-6.

The Reds began their innings with the promising young pair of Miryam Khokhar and Achini Perera. The two of them completely dominated the innings playing aggressively and tactfully in piling on an opening partnership of 101 runs of 101 balls. The first to fall was Miryam Khokhar holding out a return catch to Terisha Bess in the 17th over with her personal score at 44 (5 -4's). 3 balls later Achini played a lofted shot towards long off and Hiba Shamshad took a superb diving catch to end her innings on 42 (5-
4's).

It was still even stevens at this stage with Reds requiring 14 of 3 overs and two new players (Chuntell Martin and Nicole Samuels) at the crease. The Greens however were not able to keep the pressure on and with Nicole dismissing Kainat Qazi for a boundary of the very first ball she faced the odds turned in the Reds favour and they reached their target of 118 with 2 overs to spare.

The most economical of the Greens bowlers was Hala Azmat who gave away 9 runs of her 2 overs, while the other bowlers averaged between 5.00 and 12.00 runs per over.