Canada, needing to beat the UAE in their final match of the round robin in the ICC WCT20 qualifier,  lost by 14 runs, and failed to make the play offs. Three consecutive losses saw them fall to 5th place in the group.

Canada won the toss, chose to bowl, and got off to a great start, with Romesh Eranga bowling Rohan Mustafa in the first over, and Junaid Siddiqui, playing his first match of the tournament and opening the bowling, having Chirag Suri caught off his first ball. Saad Bin Zafar broke a promising partnership when Rameez Shahzad was given leg before- 48/3 in the 8th over. Tight bowling meant UAE did not hit a boundary in the middle 8 overs. 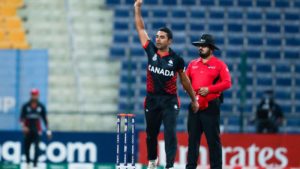 Saad Bin Zafar took his second wicket in the 18th over, thanks to a fine stumping from Hamza Tariq, and his third next ball to a catch in the deep. He finished his spell with 3/21 from four overs. The UAE hit well to take 40 from the last two overs to set Canada a target of 155. Muhammad Usman made 89*. of their total of 154/5.

Wijeyeratne got Canada off to a bright start with 21 from 15 balls, but the scoring slowed in the middle overs. Navneet Dhaliwal made 41 from 36 balls but when he was out, Canada needed 73 from 7 overs. Ravinderpal Singh hit a couple of boundaries but with 28 needed from the last two overs he was caught in the deep. Kirton was unbeaten at the end, making  37 but took 39 balls in doing so. Canada finished on 140/5.