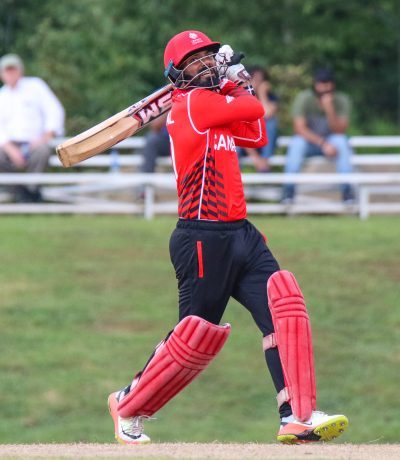 Although having supposedly given of their competitive best Canada’s Red Army cricketers managed only a single victory from the five matches actually played in the 2018 Cricket West Indies Regional Super50 Competition. The Canadians sole victory came via their dramatic second round Match 5 defeat of the Windward Islands

Playing against far more experienced opponents, including several West Indies Test and One Day International players, the Canadians fashioned several noteworthy individual performances but failed to ultimately produce the necessary goods as a team, except for the one victorious occasion against the Windwards.

An examination of the actual Match results below would suggest that the Canadians major failure was in their batting. In the five matches played the Canadians only twice managed to amass scores of over 250. Their remaining match totals were all in the range of 200-210 at an average of just over 4 runs per over. Hardly competitive against teams with batting lineups which included several West Indies players with Test and One day International experience!

In the batting department, Canada’s best performer was Navneet Dhaliwal with a 306 runs Tournament aggregate, scored at an average of 45.17 with an 88.56 strike rate. Newly appointed team captain Davy Jacobs was second in the Canadian batting averages with an aggregate of 242 runs for an average of 35 and a strike rate of 72.31.

Romesh Eranga was by far the Canadians best bowler throughout the Tournament. He captured 17 wickets from 6 matches played at an ultra impressive average of 12.12 with a 4.38 economy rate. Behind him the next best performer with the ball for Canada was Salman Nazar. His 6 Tournament wickets were captured at a 41.33 average with a 5.47 economy rate.

Canada’s 2018 Regional Super5o participation was the first in over a decade. In its 7 appearances to date, Canada has only managed to reach the quarterfinals once.