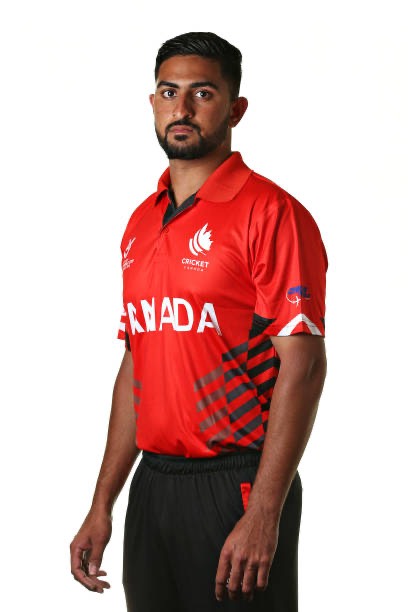 As he approaches his twentieth birthday this coming November, Ayush Verma has firmly
set his sights on banging on the door of Canadian cricket’s National Selectors. Verma’s
objective is to provide the Selectors with sufficient evidence as to warrant his inclusion on
future national teams.
Born in Markham, Ontario on November 12, 2000, Ayush Verma first started playing cricket in
India at the tender age of 6. At the time of his birth Ayush’s Dad, Rajan, was overly busy working
in an attempt to make ends meet. Realizing that he couldn’t take proper care of his new-born son,
Rajan made the decision to move Ayush to India to live with his own parents and brothers. Ayush
was just six months old when he arrived in India.

Ayush’s first involvement in competitive cricket occurred when he was selected to the U12 District Team in India. After that, he gradually
fell passionately in love with the sport, so much so that all he wanted to do all day long was to play cricket!
Ayush lived with his grandparents in India for 15 years straight, during which time his Dad would visit a few times every couple of
years. His Grandfather, Satpal Verma, made a lot of sacrifices to allow Ayush to fully pursue his passion for cricket.
It was as a fifteen-year old that Ayush returned to Canada in 2015, armed as he was with his Indian bred passion for cricket and determined
to make a name for himself. He soon joined the Toronto Cricket Club but would return to India each year during the winter
months to continue his State cricket, as a means of ensuring his exposure to increasingly higher levels
of competitive cricket.
Ayush’s performances as an opening pace bowler for the Toronto Cricket Club in Ontario’s Junior
Leagues soon caught the attention of the Canadian National Selectors. As a result, he was included
in the Canadian Squad to the South Africa hosted 2020 ICC U19 World Cup.
Ayush’s performances at the 2020 ICC U19 World Cup were moderate. He only played in three of
Canada’s five matches, capturing just two wickets at an average of 47.50 from 16 overs bowled. As
a batsman he scored just 13 runs in the 3 innings he batted. He did, however score the winning runs
in one of Canada’s victorious matches against arch-rivals the USA, which for him was obviously one
of the most memorable moments in the entire Tournament.
Armed with his South Africa ICC U19 World Cup experience, Ayush’s ambition is to become
good enough a cricketer as to one-day merit automatic inclusion to Canada’s National team in
any format. He considers himself lucky to have grown up in an environment where nothing
was easy and to get anything you had to work very hard. Learning that at an early age, as he
did, has been a monumental factor in Ayush’s development into the obviously level-headed
and mature individual he has since become!
Not surprisingly his philosophical approach to cricket is much the same. He fundamentally
believes that hard work and everyday consistent commitment are the keys to producing the
desired performance results. The rest is beyond his control, so he routinely goes about doing
his daily cricket drills and doesn’t at all worry about the future.
As he goes about indulging in his passion for cricket and pursuing his dreams of future international
success, Ayush has been inspired by his fellow Canadian born National cricketer,
Nitish Kumar. Ayush’s Dad, Rajan, has always been one of Kumar’s biggest fans and a very
close friend of Nitish’s uncles. He therefore duly arranged for Nitish to send a Best Wishes
inscribed autographed bat to Ayush in India. Since then Ayush has naturally always looked
up to Nitish as a source of inspiration for his own career. Not surprisingly he has also identified
Ben Stokes as the international cricketer whom he now admires most.
With much of the 2020 Canadian Domestic Cricket Season having been obliterated by
COVID19, Ayush nevertheless kept himself busy working on a few drills and more importantly
doing a lot of fast bowling related fitness work. Now that the season has finally
started he has already begun to see the positive results of his activities. He therefore
now has every confidence that his performances will indeed soon be providing him
with ample reasons to be banging on the doors of the Canadian National Selectors.