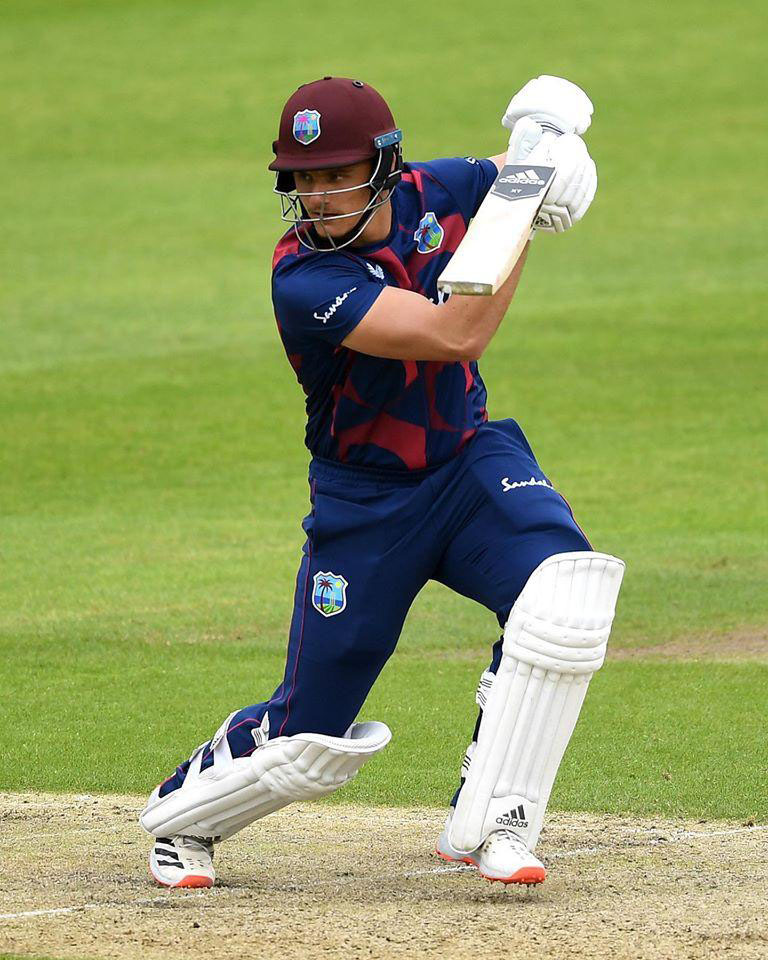 Wicketkeeper Joshua DaSilva, who arrived on the West Indies tour of England as a member
of the reserve list, hit the first century for the tourists scoring an unbeaten 133 on the third
and penultimate day of the final intra-squad match at Emirates Old Trafford. The Trinidadian
batted for the second consecutive day, as he continued from his overnight 60 to get to three figures.
He faced 248 deliveries and hit 17 fours, as the side captained by Test skipper Jason Holder
was dismissed for 272. There were a number of eye-catching drives while he weathered a hostile
spell from Oshane Thomas, batting on despite a painful blow to his right hand on 75.
The skilled wicket-keeper/batsman DaSilva was also the leading run-scorer for the Emerging
Players team which stunned everyone to win the 2019 Caribbean Region’s marquee Super50
Tournament. A confident and competent 21-year-old he took this form back to Trinidad and
Tobago where he finished the West Indies Four-Day Championship atop the Red Force runscoring
charts.
In first-class cricket he has played 16 matches and has been efficient and effective in front and behind the stumps with 855 runs including
– a century and five half-centuries. His glove-work has earned high praise and he has also taken 27 catches and one stumping.
In the 50-over format he made 10 appearances, with 331 runs at the top of the order, at an impressive average of 41.37 – including a
top score of 103 not out.
Now playing his Trinidad & Tobago domestic cricket with the world-famous Queen’s Park Cricket Club, DaSilva actually didn’t play
much when he was young. It wasn’t until around age 12 was when he started playing seriously while attending St. Mary’s College in
Trinidad. Before then he was basically just playing in the family home backyard or with neighbors for fun.
DaSilva actually never thought that he would be a cricketer. He’d always thought of himself as a footballer, kicking a ball as he always
used to for as long as he can remember. At St.Mary’s he played both sports from Form One to Five. It
was only when the time came to his having to make a decision where he had to choose one sport
to pursue that having considered the relative odds of a footballer or cricketer making it in the
Caribbean, he subsequently chose cricket. Not too long after making that decision, DaSilva had
his very first taste of regional cricket, playing for the Trinidad and Tobago Under19s in 2016.
Towards the further development of his naturally gifted skills, DaSilva confesses to definitely
spending a lot more time working on his batting rather than wicket-keeping. He acknowledges
there is a lot of stuff he can improve on but is very confident with the gloves. He would in
fact back himself 100 %, as a result of his prevailing self-confidence that he is indeed a very
good wicketkeeper.
DaSilva also considers himself to be very much a team player, ready and willing to bat at any
number in the order. During the 2019 Regional Series, he played the first few games wicketkeeping
and batting at six. After T&T’s captain, Denesh Ramdin had returned from international
duty, DaSilva moved up the order to open the batting. The new ball he found a bit harder to
face although it suits his game a little more than batting in the middle. Overall, he has immensely
enjoyed both challenges so far.
DaSilva believes that continuing to work on his fitness will be the key to his future success, especially
considering the experiences he has already had where he has kept wicket for an innings and
batted earlier than usual. Fresh from the valuable experience of the recently concluded England
Tour and especially his stand-in involvement in the 3rd and final Test as a substitute replacement
for the injured Shane Dowrich, DaSilva’s next objective will be to perform impressively at this
year’s Caribbean Premier League (CPL). He has been drafted to the St Kitts Patriots for the Trinidad
& Tobago hosted T20 Tournament which got underway on August 18.
Beyond CPL 2020 DaSilva had initially set his sights on becoming a West Indies A Team
certainty pick. Even though 2019 was only the first Season during which he had done really
well, his demonstrated consistency has, however now already provided sufficient
proof to the West Indies Selectors to warrant his consideration for inclusion when
the time comes for their selection of the squad to tour New Zealand.