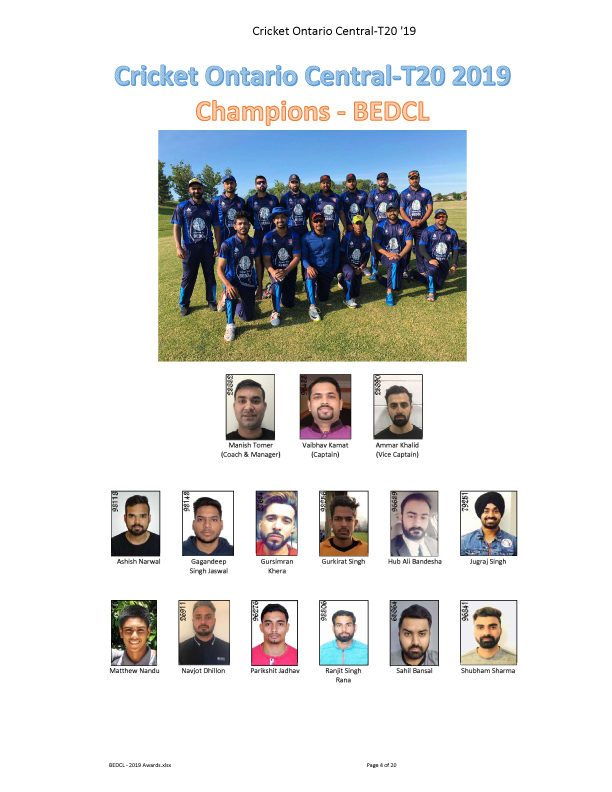 The Brampton-Etobicoke District Cricket League’s (BEDCL) 2019 Annual Awards will take place on Sunday November 24, from 6:00 pm to 11:30 pm. The venue for the Awards will be Mississauga’s Verdi Convention Center, which is located at 3550 Derry Rd East.

A slew of Awards will be presented during the Gala Evening’s proceedings, which is expected to attract some high profile attendees including Brampton City Mayor Patrick Brown and Cricket Canada President Ranjit Saini. BEDCL President Praim Persaud along with his fellow Board Members Vice-President Gokul Kamat, Treasurer & Acting Secretary Rumi Jasavala, Statistician Denny Eapen and Umpiring Coordinator Arsalan Baig will be the evening’s hosts.

The Evening’s Awards will include those to be handed out to the Champion Teams for the League’s various competitions. During the course of the annual cricket Season BEDCL hosts 50 Over competitions with Elite, Premier, One (1), Two (2) and Three (3) Divisions as well as a T25 Format with a Super Elite, Elite, Premier, First, Second and Third Divisions.

The Gala Evening’s proceedings will also witness a number of awards for Individual Excellence on the field of play during the cricket season. Nadeem Manjra, Charanjeet Gill, Tushar Patel, Harchain Johal and Mandeep Randhawa were the respective Individual MVP’s for the Elite, Premier, 1st, 2nd and 3rd Divisions in the League’s 50 0vers Regular Season competition.