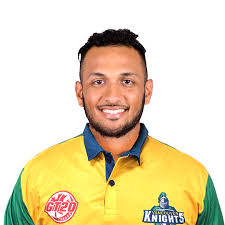 Inept batting, punctuated by bewildering shot selection by their top batters, prevented Canada from securing a shock victory over the Leeward Islands Hurricanes in the November 21 2019 Colonial Medical Insurance Super50 Cup return encounter of the two teams played at St Kitts'Warner Park. Chasing a very reachable 233 for victory in 50 overs, the Canadians crumbled in the face of some aggressive hurricane fast Leewards bowling, led by Quinton Boatswain and Colin Archibald, to be 183 all out in 44 overs, just 50 runs short of their victory target.

After the Leeward Islands Hurricanes had won the toss and decided to bat, the Canadian bowlers once again performed admirably by restricting their hosts to just 233 at the end of the 50 overs.  The Hurricanes made a rapid start, but soon ran into trouble on 86 for four before Devon Thomas anchored two significant partnerships that added beef to the total.

Thomas posted 51 for the fifth wicket with Akeem Saunders (22) and 44 for the sixth wicket with Terrence Warde (25). Thomas' run-ball 53 included four boundaries. He was however extremely fortunate to have been dropped twice by the Canadians, whose fielding was yet again not nearly as sharp and supportive of the bowlers as it should have been .

The Leewards lost their sixth wicket with the score on 180 then had two further setbacks, losing three for nine in the space of 19 balls. They stumbled to 190 for eight in the 45th over before Archibald and Boatswain extended the innings with a stand of 34 for the ninth wicket.

Rayan Pathan was the pick of the Canadian bowlers, taking 4-53 from 10 overs. Shahid Ahamadzai snared 3-46 from his 10 overs.

There was no stability from the Canadian batting in their pursuit of what was in no way an insurmountable target. A few small stands sprinkled the innings and only three batsmen passed 20.

Rayan Pathan, opening the innings, took the fight to the Leewards with a belligerent 29 ball 44 that included 2 sixes and seven fours. The Canadian innings was however set back by the almost inevitable loss of key wickets at crucial intervals in their chase.

After Harobindeeep Sekhon, who didn't look at all comfortable opening the innings, was predictably caught at first slip by Kieron Powell for 3, wafting at short delivery from Boatswain to offer the simplest of catches, Nitish Kumar and Pathan repaired the early damage by adding 23 for the second wicket. Kumar was then totally deceived to be comprehensively bowled by a beauty of a slower ball from Sheno Berridge for 14, to start what became a fairly regular procession by the Canadian batsmen to and from the crease.

Apart from Shreyas Movva, who never looked as though he belonged in the number four batting position being inevitably caught behind fending off yet another of Boatswain's short pitched short pace deliveries, the remaining Canadian top order batsmen were all guilty of throwing their wickets away. Pathan perished as he had lived, attempting one big hit too many to caught off Campbell's spin. Arslan Khan (12), Harsh Thaker (40), Kanwerpal Thatgur (15), Shahid Ahmadzai (11) and Harmandeep Singh (4) all came and went with predictable regularity to leave the Canadians struggling at 150-8 after 34 overs.

As the Team's captain and one of its more senior and reliable batsmen, Thatgur's dismissal was shockingly disappointing. He chased a short pitch ball from Archibald that was so far out of his reach that he only managed to hit the ball off the very toe end of his bat before it went spiraling upwards for the Leewards captain and wicket-keeper Jamhar Hamilton to take the simplest of catches.

Kanwar Mann offered some stout resistance in compiling an unbeaten 25. The eventual result was by then never ever in doubt as the Canadian folded meekly to be all out for 183, fifty runs short of their victory target.

Bowling for the Leewards, Quinton Boatswain was the main enforcer, unsettling several of the Canadian batsman with pace and bounce. He grabbed 3-37 from his allotted 10 overs to earn the Player of the Match award. Colin Archibald supported with 3-36 from eight overs completing a fine all-round performance.

The loss left the Canadians stuck on four points, with just one win against five losses in their six matches played. With only two matches left, against Barbados on November 23 and the Combined Campuses & Colleges two days later, the Canadians will be hoping that they can put behind their tendencies to date of relinquishing wonderful opportunities for victory to secure at least one win from their remaining encounters!