An unbeaten half-century by Kinchit Shah and a three-wicket haul by Nasrulla Rana helped Hong Kong to a 32-run win over Canada in the Group B of the men’s T20 World Cup qualifiers.

This was Canada’s first defeat in four games and they are now second on the points table, with the net run-rate separating them and table-toppers Oman. Despite their victory, Hong Kong stay at the second spot from the bottom with four points from five games.

Hong Kong captain Aizaz Khan opted to bat after winning the toss and they found themselves on 24 for 3 in the fourth over. Left-hand batsman Shah, batting at No. 4, then took control and with Waqas Barkat added 39 for the fourth wicket to stabilise the innings. 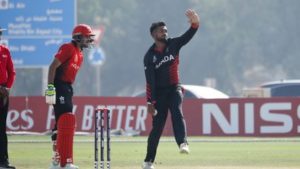 Barkat fell to the offspin of Nitish Kumar for a 23-ball 27 but Shah carried on. He and Haroon Arshad took the side close to 100. The two added 35 in just 25 balls to keep the scoreboard moving but then Shah cut loose as Hong Kong plundered 51 runs from the last five overs. Shah brought up his fifty with a six off Dillon Heyliger in the final over and overall struck three sixes and two fours in his unbeaten 59 off 48 balls to help his side reach 150.

Canada’s chase never really took off. Medium-pacer Rana dented them early by dismissing opener Rodrigo Thomas for 12. From the other end, Haroon Arshad bowled Navneet Dhaliwal, the other opener and Canada captain, to leave them 17 for 2.

Nitish and Ravinderpal Singh ensured Canada didn’t lose any more wickets till the halfway stage but by that time the asking rate had climbed past ten. Rana broke the stand with Ravinderpal’s wicket in the 11th over. The incoming batsmen tried to provide some impetus to increase the scoring rate, but Canada kept losing wickets at regular intervals. Wicketkeeper Hamza Tariq scored a 13-ball 17 before becoming Rana’s third victim, and on the next ball, Rizwan Cheema was run out for 20 off 19. At 88 for 6 in the 17th over, the result was all but decided.

It was not that the Canada batsmen didn’t get the starts. Seven of their batsmen reached double figures but no-one could go past 20.