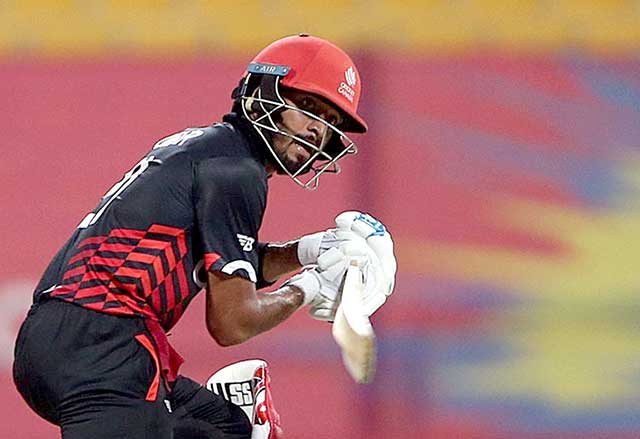 Canada’s outstanding cricket all-rounder Nitish Kumar
has been included in the Leeward Islands Hurricanes
Final 15 member Squad for its participation in the
2021 Caribbean Regional Super50 Championships. The
Leeward Islands Hurricanes will be one of six Caribbean
territory franchises competing in the Cricket West Indies
in the 2021 edition of the annual cricket West Indies fifty over
tournament. The Barbados Pride, Guyana Jaguars,
Jamaica Scorpions, Leeward Trinidad & Tobago Red
Force, and the Windward Islands Volcanoes will be the
other five competing franchises for the February 7-27,
2021 Tournament which will be played in Antigua.

The Canada born Kumar’s selection to the
Leewards Hurricanes 2021 Super50 Squad
follows his participation in the Franchise’s pretournament
Training Camp which was held in
Antigua earlier this month. He is the only non
Caribbean based player to be selected to any
of the finalized squads that will be competing
in the 2021 Super50 Championships.

The Leewards Hurricanes will clash with the
Windwards Volcanoes at the Coolidge Cricket
Ground in Antigua, for the Sunday, February
7 opening match of the 2021 CG Insurance
Super50 Cup. A total of 19 matches will be
played in the 50 Over Tournament which is
scheduled to conclude on February 27.

The six competing teams will play each other on a round-robin basis with the top four teams qualifying for the semi-finals and the opportunity to reach the grand final. Matches will be played at Antigua’s two international cricket venues - the Coolidge Cricket Ground (CCG) and the Sir Vivian Richards Stadium (SVRS). There will be 13 matches at CCG including the semi-finals and final, and six matches at SVRS.

The Leeward Hurricanes 2021 Caribbean Regional Super50 Preliminary Round matches will be on Feb. 7 vs Windward Volcanoes; Feb 10 vs Barbados Pride; Feb 13 vs Guyana Jaguars; Feb 17 vs T&T Red Force and Feb 19 vs Jamaica Scorpions.

As a right-handed batsman and right-arm
off spinner, Canadian born Nitish Kumar
created history in 2011 by making his One
Day International debut and becoming
the second youngest ever ODI player. His
participation in the ICC 2011 World Cup
also made him the then youngest player to
ever feature in the Tournament. Kumar made
his Canadian T20 International debut in
2012 and has since then become one of
Canada’s leading batting all-rounders
and a regular member of Canadian
National cricket teams. Kumar’s October
2016 Canada National Men’s cricket team
captaincy appointment, at the age of 22,
made him one of the youngest ever to hold
that position.

Following the T20 World Cup, he was named in Canada’s squad for the
2019–20 Regional Super50 tournament in the West Indies.
He was again the leading run-scorer for Canada in the
tournament, with 265 runs in eight matches.