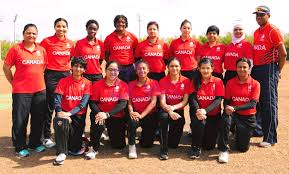 Cricket Canada has announced the appointment of a three
member panel for the selection of its National Women’s
teams. The panel will be comprised of two selectors
from Ontario: Fowzieh Yaqubien and Suthershini
(Sutha) Sivanantham, as well as one: Kim Coulter, from British
Columbia. Ontario’s Fowzieh Yaqubien will serve as the
Committee’s Chairperson.

The appointments follow Cricket Canada’s 2020 amendment
of its Player Selection Policy to incorporate the establishment
of a dedicated Women’s Selection Committee. The amendments
were made as another significant step towards establishing an
independent structure and emphasizing the focus on growing the
women’s game.

Nominations were invited from Provincial Cricket Boards and Cricket
Canada’s Women’s Committee. The prerequisites for the selectors
were that they should have played at the highest level for
Cricket Canada or a full member of the ICC. Upon review of the
recommendations the Board approved the Fowzieh Yaqubien led
three member panel to serve as Cricket Canada’s new National
Women’s Selection Committee for a period of two years.

Having represented India in 8 Tests and 13 ODI’s including two
World Cups in 1977 and 1982, Fowzieh Yaqubien, is amongst
the pioneers of Women’s international cricket. She was instrumental in India’s first ODI win against England represented by Rachel Heyhoe Flint and Enid Bakewell among others, scoring 88
and taking ﬁve victims behind the stumps. She holds the
record for effecting the most dismissals as wicket-keeper
in a single Women’s Cricket World Cup for the 1982
Tournament with 20 dismissals in 10 innings.

Suthershini (Sutha) Sivanantham made her
international debut playing for the very first Sri
Lankan women’s team in Nov 1997. She captained
Sri Lanka from 2002-2003 recording 6-0 victories
against Pakistan and West Indies. Her 5 for 2 haul
against Pakistan still remains the most economical
fiver in women’s ODI history. She led Canada in
their T20I series against USA in July 2010, which
Canada won 2-0.

A trailblazer in her own right, Kim Coulter started
playing cricket when she moved to Canada in 2001.She
debuted for Canada in 2006 opening the batting against
Bermuda and in her third international game she scored 58. She
was part of the Canadian team that defended the America’s Championship in 2009 and 2012 and
participated in the ICC Global World Cup Qualifier in 2013.

Simran Singh: One To Watch!