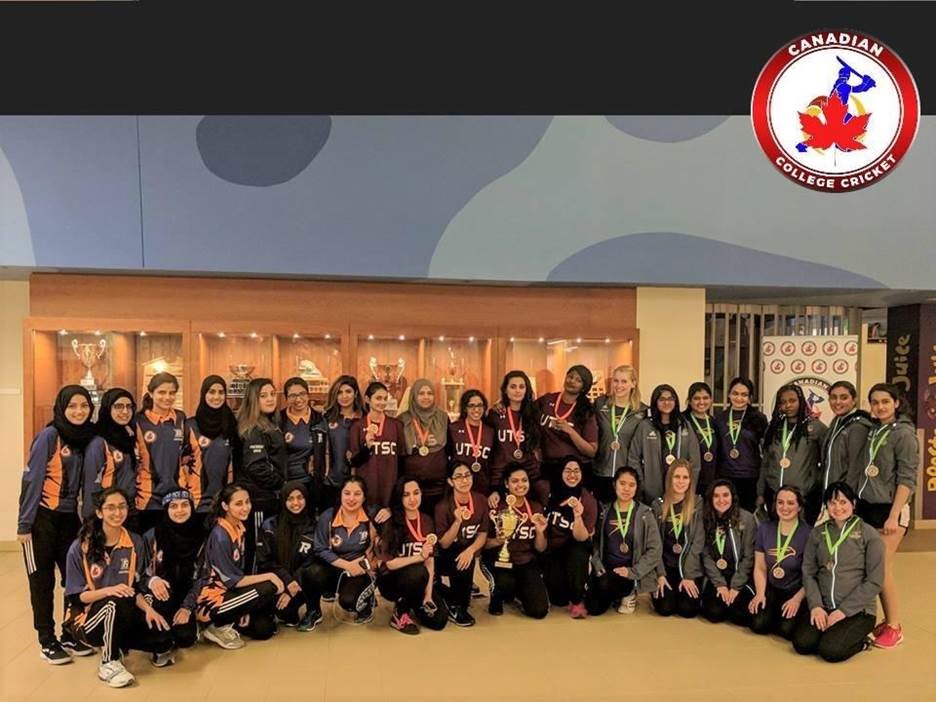 The University of Toronto Scarborough Cricket Club (UTSC) is now in the final stages of its preparations for its hosting of the March 2020 3rd Female TriSeries at the Toronto PanAM Sports Centre. The teams that shall be competing in this year’s Tournament will be those representing the Universities of York, Laurier and the hosts UTSC.

The UTSC’s Annual Female TriSeries is yet another one of the initiatives the Club’s current President Avee Gandhi has introduced since he began his Presidential tenure, three years ago in September 2017. As the time of his assumption of UTSC’s Presidential reins, the two major concerns Gandhi had thought were really in need of being urgently addressed were a) to increase the student involvement at the club and b) to also discover a solution to increase female participation within the Club.

Prior to Gandhi’s Presidency, female involvement at UTSC had been limited to participation in a Coed League. The abiding rule at the time was for the mandatory inclusion of at least one female player to every participating team within an UTSC hosted League.

That rule however served to severely limit the participation of female players. Hence, one of the very first measures Gandhi and his fellow Executives undertook was to increase the Club’s level of female participation. Towards that end in the month of September-2017 they began an on Campus campaign to promote the Club and to increase the awareness of its existence through word of mouth, social media and the creation of new audience friendly events that were geared towards attracting increased numbers of spectators.

As a direct result of these initiatives the Club experienced an influx of both new female and male players. Participation at Club events surged and the membership grew to 70+ active members, an over 100% increase on the 30 that had previously been registered!.

Buoyed by their success, Ghandi and his team boldly implemented further changes. One of these was to increase from one to two, the minimum of female players required to form an eight member team for a UCC hosted League. This change was such an immediate success that the club began receiving multiple appeals to implement an independent program for its female players.

With the full support pf Ghandi and his fellow Executives, two ambitious female UTSC students, Mariam Bhatti and Amaan Khawaja initiated the development of an all female Campus program with an initial membership of 30 students. In conjunction with the very supportive UTSC Athletics Department, Bhatti, Khawaja, Ghandi and the other UTSC Executives introduced a 3-4 weeks trial program for the female students in the year 2018 during the months of February to March. Simultaneously they also worked with Canadian College Cricket (CCC) and UTSC Athletics towards the development of an all female Tournament for students playing university level cricket. It was this Tournament that was subsequently labeled as the Female TriSeries.

On March-07-2018 the first all female cricket team in the history of UTSC, and UofT for that matter, took a part in the Female TriSeries at the Toronto PanAM Sports Centre. This series was contested between Ryerson, Laurier and UTSC. In this Inaugural Series, the UTSC’s Female Cricket Team played undefeated to the finals, eventually winning the Championship title of the first Female TriSeries.

During the summer break of 2018 the Club took some decisive actions to further empower the female cricket program on Campus. Ghandi’s continuing vision as President was to create an independent space for female cricket. He realized that the further development and expansion of the Campus’ female cricket program could only be best achieved through the implementation of the enhancements that would be desired by the players themselves. As such the Club created two new positions on its Executive body and hired two new female Representatives to fill both positions.

The newly engaged female Representatives were charged with the responsibility to oversee the Women’s program on campus and work on a plan towards its expansion. Amaan Khawaja and Perenthaa Arulnesan took charge as the UTSC’s first female Representatives in September-2018.
Ghandi and his expanded Executive also introduced a permanent weekly female only practice throughout the year with coach Prakhar Sharma. The Coach Sharma Weekly Practice Program was geared towards attracting new female students to attend to learn more about the sport of cricket, especially of if they were first timers to the sport.

By the time 2019 cane around the UTSC Female Program had enjoyed much success in its expansion process. The Club’s active membership had grown to over 100 students, 35-40 of whom were female members.

On March-13-2019 UTSC along with the UTSC Athletics Department and CCC hosted the second annual Female TriSeries at the Toronto PanAM Sports Centre. Contesting in this series were teams from Ryerson, York and UTSC. Yet again after being undefeated the UTSC Female Cricket Team won the title of Champions at the 2nd Female TriSeries. Captain Perenthaa and Vice Captain Amaan lead the team to a 2nd undefeated win in this historic Tournament.

The UTSC’s Female Program has since then not looked back. Moving every day towards the further achievement of new milestones. Now efficiently lead by Perenthaa Arulnesan and Khatija Malkan, who both took over administrative control following Amaan Khawaja’s graduation, the UTSC Cricket Club’s Female Program now boasts a membership of 50+ Students within an overall membership pf 150+.
The Club now also has female umpires, having made a reality of one of its key visions. Now truly a “Coed Club” UTSCCC is collectively expanding the sport of cricket both on its own home Campus and well beyond!