Cricket in Canada is continuing to grow in popularity as a sport for all ages and is one of the most family friendly. It is also quickly becoming arguably the fastest growing sport in Canada.

At the foundation of Canadian Cricket’s ever increasing popularity is its outstanding Club structure. Thousands of clubs across the country now serve as feeder streams for cricket enthusiasts at all levels. One such club is the Edmonton Challengers Cricket Club which started operating in 2011 and is now celebrating its 8th year.

Challengers Cricket Club is one of Edmonton’s fastest growing and favorite clubs, as evidenced by the fact that the Club has been increasing its players, membership and championships won every year. The passion, dedication and respect towards the game of the Challengers Cricket Club Members has allowed it to win every championship and tournament it has participated in within recent years.

Having begun its operations in 2011, the Challengers Cricket Club plays under the Edmonton & District Cricket League, which is affiliated to the Alberta Cricket Association. Challengers started back in 2011 with only one team, which competed in the League’s 3rd Division. Since then and within the last 6 years Challengers Cricket Club has grown to having 5 teams. The Club now boasts teams which compete in the both the respective Elites and Premier 50 Over and T20 formats, as well as in the League’s 1st and 2nd Divisions.

The Challengers Cricket Club’s Elites teams are comprised of players who have represented Canada at the Senior and U-19 levels, the Province of Alberta and/or the City of Edmonton. The First Division team allows Challengers Cricket Club to introduce the game to younger generation cricketers and to provide playing experience to kids aged 19 or younger. 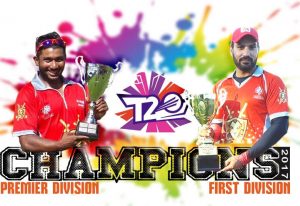 As a Club the Challengers’ primary focus has been on nurturing its junior cricketers. Two of the Clubs’ outstanding youth cricketers, Miraj Patel and Parnav Sharma have represented the Canadian national team at both the ICC 2016 and 2018 U19 World Cup.

At the Seniors level, Romesh Eranga was selected to the Canadian national team for both the 2018 ICC Americas T20 Qualifiers and the Caribbean Regional Super50. He emerged as the Super50 Competition’s highest wicket taker to firmly solidify his place on the Canadian National Senior Team Squad.

The Challenger Cricket Club now also has within its ranks several players from Asian countries (Pakistan, India, Sri Lanka and Bangladesh) who have played domestic cricket in their respective countries. These players are now representing Challengers Cricket Club at various levels. They are also performing roles as mentors and coaches for the Club’s younger cricketers.

The success Challengers Cricket Club has enjoyed onto now has been a direct result of the unstinting dedication and hard work of its Member management team, comprised of Gurdeep Klair(Owner), Rohit Aggarwal (Manager) and Manainder Pal Sing Bala (Co-ordinator). Together they have managed to make the Challengers Cricket Club as successful as it has become. In so doing they have achieved their goal for the Challengers to be one of the very best cricket clubs in all of Alberta, An outstanding reputation that they can now look forward to maintaining for many years to come!