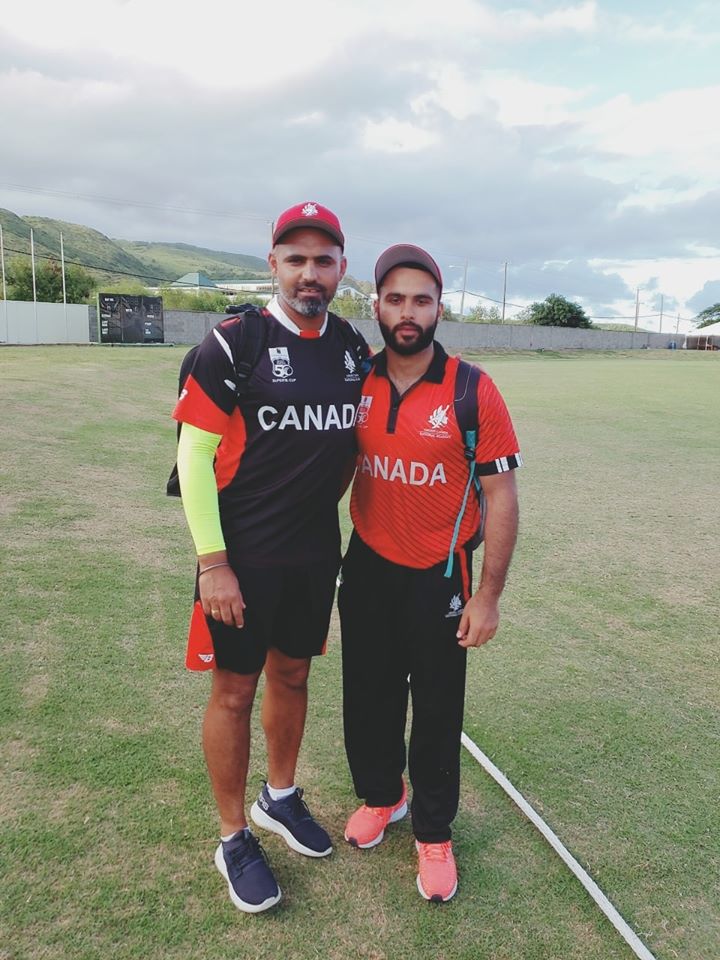 The Cricket Canada Development Team’s performance in the recently concluded St Kitts hosted Zone A matches of the 2019 Cricket West Indies Colonial Medical Insurance Super50 Tournament, was a source of justifiable pride for the Team’s Head Coach and Manager, South Africa’s Amarinder Bhinder. The relatively inexperienced Canadian Development Team won two of its eight matches played, one better than their far more experienced countrymen had done during the 2018 Tournament.

The reason for Bhinder’s pride is that his team’s eventual played eight, won two, lost six record did not in anyway accurately reflect the Team’s actual performances on the field of play. In fact had it not been for repeated instances of poor shot selection by set batsmen, coupled with a few too many fielding blemishes, including numerous simple dropped catches, mis-stumpings and unrealized run out opportunities, the results could and should have been played 8, won 6, lost 2!

Having only moved to Canada just a year ago, Bhinder was presented with the onerous task of leading a relatively young, largely inexperienced Canadian Development Team to participate in the 2019 Cricket West Indies Regional Super50 Championships. The Canadians opponents for the Tournament’s Zone A matches would be teams from Barbados, the Combined Campuses & Colleges, Jamaica and the Leeward Islands as hosts. Each boasting seasoned or emerging West Indian players within their ranks including the likes of Carlos Brathwaite, Rhakeem Cornwall, Ashley Nurse and Rovman Powell.

At the outset Bhinder was under no illusions as to just how tough an assignment the St Kitts campaign was likely to be. His actual expectations were that their unfamiliarity with each other, the playing conditions and the superior experience of their opponents, would cause his Development Team to struggle during the first two or three matches to such an extent that they might even be badly beaten. He also expected that they would improve during the Tournament’s middle matches, but perhaps likely fade towards the end as a result of Tournament fatigue and exhaustion.

The team’s performances in the initial three matches, of which they won the third and could so easily have also emerged winners of the first two, was therefore a bit of surprise for Bhinder. He realized very quickly that while the Team was obviously blessed with individual talent, their overall lack of self confidence coupled with the batsmen’s inabilities to bat for long periods of time would be the biggest barriers to their chances of winning matches during the Tournament.

Fielding was also an issue as most of the players seemed incapable of handling skied catches with the ball wobbling around in the air. Dropped catches quickly became the bane that prevented Team Canada from closing out their opponents innings after they had captured early wickets.

Each and everyone of those who made either match winning centuries or had fifty-plus scores against the Canadians were beneficiaries of spilled chances, The most glaring example of this was Rhakeem Cornwall’s match winning 92 for the Leewards in the Canadians very first match. Cornwall was badly dropped twice, first on 42 and again on 90. His eventual 92 helped the Leewards recover from being 166-7 to eventually score 257, a total that proved to be out of reach for the Canadians.

Coach Bhinder’s task was also not made any easier by the spate of injuries which affected the Team. This forced him to have to make constant changes to the playing eleven and prevented him from having a settled side. In fact it wasn’t until the very last match against the Combined Campuses and Colleges, which was handsomely won, that the Canadians managed to field their strongest team.

Given the limitations Coach Bhinder and his Assistant Daulat Khan, quickly realized that the Canadians only chance of doing well in the Tournament would be to play to their strengths which was their spin bowling. In his words, slow, “boring” cricket would have to be the Canadians default as the opposing batsmen were obviously not nearly as comfortable against spin as they were to pace. Bhinder’s approach was borne out by the fact that the Canadian spinners were eventually all among the wickets, while recording very admirable economy rate of less than 5 runs an over.

While the bowlers essentially stuck to the game plans Bhinder and Khan had developed, the batsmen were unfortunately not nearly as successful in fulfilling their assignments. Very poor shot selection, often as a result of having been put under sustained pressure by tight bowling, repeatedly caused Canada’s batsmen to lose their wickets at crucial stages of each contest. Situational match awareness is therefore an area of much needed improvement for Canada’s batsmen for future Tournaments.

Having had the Caribbean Super50 experience, Amarinder Bhinder now fervently hopes that he will be allowed to continue playing a major role in Canada’s coaching setup for future Tournaments. The Super50 performances of Nitish Kumar, Harsh Thaker, Rayan Pathan, Kaleem Sana, Anwar Mann and Shahid Ahmadzai in particular have convinced him that Canada is blessed with abundant cricketing talent. Bhinder would therefore be pleased to be provided with further opportunities to utilize his indisputable coaching skills and experience to guide Canada’s cricketers to even greater success than was unexpectedly achieved in St Kitts!