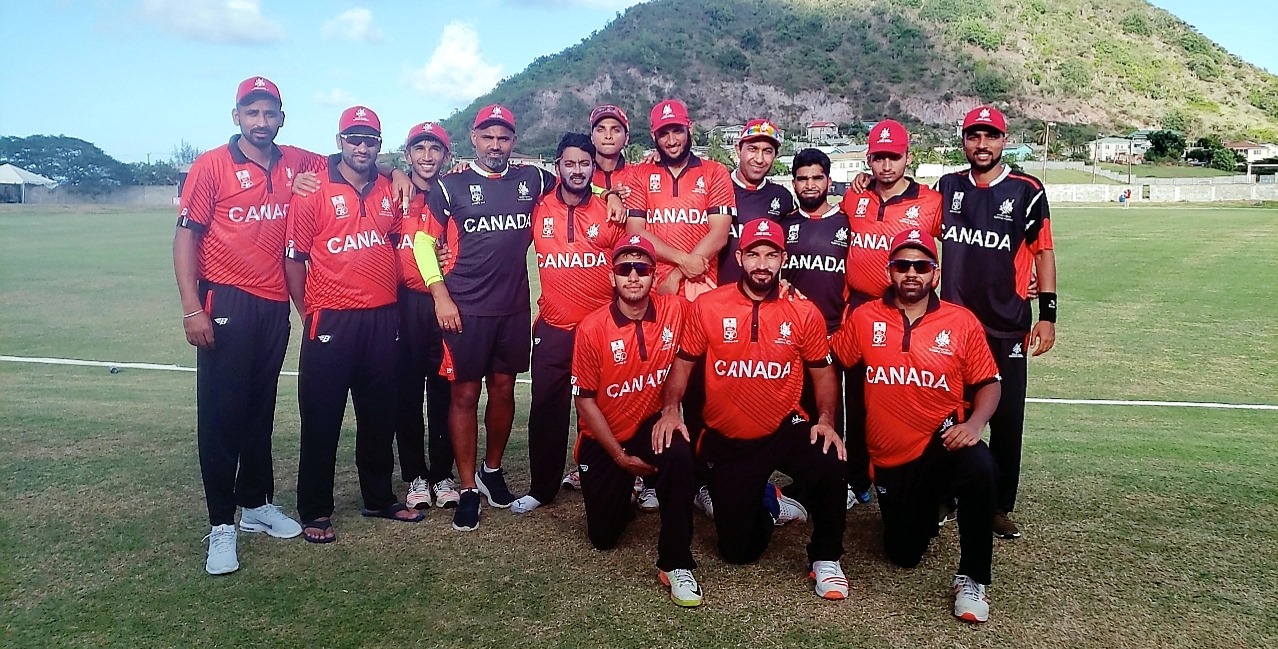 Canada’s campaign began with a 70 run loss to the Leeward Islands in their November 8 encounter that was played at St Kitts Warner Park. After the Leeward Islands had won the toss and decided to bat, the Canadian bowlers struck regularly and at one point had their hosts struggling at 166-7 in the fortieth over. Rhakeem Cornwall 92 and Jeremiah Louis 40 however featured in late innings partnerships to take the Leewards total to 257 all out in the 50th over.

Cornwall was badly dropped twice to relatively simple catches. His first chance was given when he’d only scored 42. The second occurred with his score on 90. Harsh Thaker 3/24 (7) was the most successful of the Canadian bowlers.

Set 257 for victory, the Canadians started disastrously losing their first wicket with the score on 1. Despite a fighting 49 from skipper Kanwerpaul Thatgur they never recovered, losing wickets regularly to be dismissed for 187.

Following their opening match loss the Canadians were then comprehensively outplayed by Barbados, the eventual Zone Leaders, losing by 9 wickets in their November 11 encounter. Arslan Khan’s 76 (128) was the only highlight for Canada in their substantial defeat.

Undaunted by their mammoth loss to Barbados, the Canadians then rebounded with a most memorable 100 run win over the defending Super50 Champions, the Combined Campuses & Colleges on November 13 at St Kitts’ Conaree Sports Center. Batting first the Canadians, buoyed by Nitish Kumar’s run a ball 102 and ably supported by Shahid Ahmadzai’s 73 (87), posted 249 off their 50 overs.

The Canadians pace-spin combination of Kaleem Sana’s seam and Kanwar Mann’s spin then proved too much for the Combined Campuses & Colleges batsmen who were bundled out for 149. Sana finished with figures of 3/37 (8.1), while Mann captured 3/38 (9).

The superior West Indies international experience of Rovman Powell and Nkrumah Bonner proved to be the difference in Canada’s successive loses to Jamaica in the next two encounters. Powell smashed a belligerent 67 ball hundred in the first and Bonner a slightly less aggressive 79 ball 73 in the second, to help Jamaica recover from early losses to fashion successful run chases of 246/6 and 246/7 against Canada’s posted totals of 243 and 244. Nitish Kumar with 65 (62) and Harsh Thaker 60 (85) were the outstanding performances for the Canadians in the two encounters.

Following its successive losses to Jamaica, Canada was then further humbled by additional losses to the Leewards by 49 runs on November 21 and by an even larger 7-wicket margin to Barbados two days later. Rayan Pathan’s outstanding all-round performance of 4/43 (10) with the ball, followed by a belligerent 29 ball 44 with the bat was the highlight of the Canadians’ otherwise inadequate showing against the Leewards. In the Barbados loss, Kanwar Mann’s 44 (65) and Shahid Amadzai’s 39 (53) were the only performances of note.

Canada ended its 2019 Super50 Campaign on the highest possible note, registering a comprehensive 51 run repeat victory over the Tournament’s hapless previous year winners, the Combined Campuses & Colleges. Harsh Thaker was the Canadians’ Man of the Match hero scoring 68 (67) and capturing 3/29 (10). He was very well supported by Rayan Pathan whose 41 ball 46 helped the Canadians to post 252 all out batting first. Kaleem Sana’s 4/24 (8.2) also proved to be decisive in helping the Canadians dismiss the Combined Campuses & Colleges for 201 to earn the 51 run victory.

For a squad that included 7 debutants and was comprised largely of members who had never played together before, the Canadians Super50 performances were as mentioned, highly commendable. Kudos therefore to the entire squad and especially to the coaching staff comprised of Head Coach/ Manager Amrinder Bhinder and his Assistant Daulat Khan for their outstanding performances of which all involved in Canadian cricket can be justifiably proud!