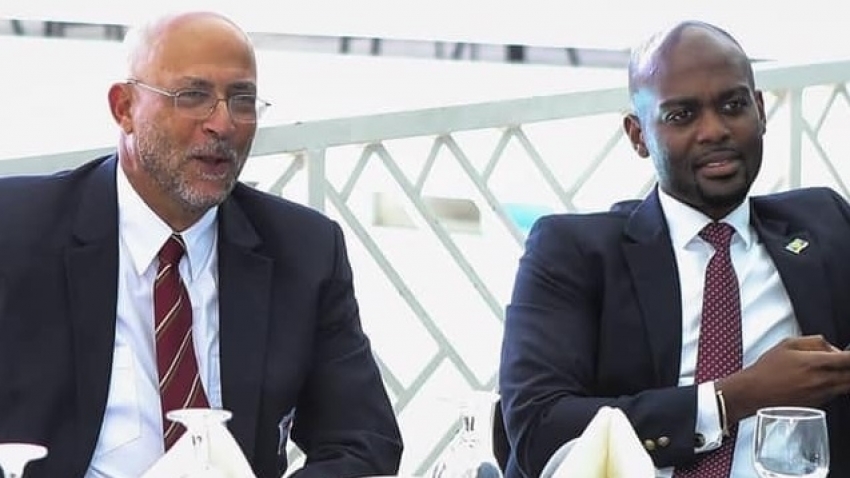 Cricket West Indies President Ricky Skerritt said he is committing to effect the changes to the board’s
governance structure as recommended by the Wehby Report that has now been shared with stakeholders.
The report that was submitted to the board just over a week ago contained some far-reaching changes that
would significantly change the way the board now operates.
The report highlighted the “need to foster the rebuilding of trust and a common purpose between CWI and the
other stakeholders, especially with regional governments”.
The recommendations included comprehensive reform of the governance structure using key principles of modern
governance to provide greater accountability and transparency and that the membership of the Board of Directors
to reflect a wide cross-section of skills and competencies.
The report also recommended a shift to a smaller and more balanced Board of 12 in the immediate instance, with
an eventual reducing to nine including at least two women. The CWI board is currently comprised of 18 members.
The roles of the president and vice president are to be redesigned to be more board specific and non-executive.
The report also recommended the establishment of a Nominations Committee to identify and evaluate potential
directors and to nominate future directors and committee members and that there be a reduction in CWI Committee
structure from 12 to five (5) Committees.
“We cannot ignore the fact that this is the fifth external governance review endeavour of its kind, within the past 13
years. However, I am confident that this latest review was conducted by five experienced, skilled and well-intentioned
West Indians, each with an unmitigated concern and respect for West Indies cricket in general,” the CWI president
said in a letter to stakeholders.
“Together they are more than capable of merging learnings from past reviews with the realities of the present, in
order to develop a pertinent and strategic outlook for a preferred future”.
An Independent Task Force led by Senator Don Wehby, which also included Sir Hilary Beckles, Mr Deryck Murray,
Mr O.K Melhado and Mr Charles Wilkin QC, prepared the report. The Task Force consulted extensively, and the 36-page report drew from a wide cross-section of expertise –
from knowledgeable persons in the West Indies as well as
in the global game.
In reaction to the report Barbados Cricket Association
(BCA) President, Conde Riley, has however indicated that
his Board had established a “high-powered” committee to
examine the recommendations put forward recently by the
Independent Task Force for Corporate Governance Reform.
Riley, a prominent Cricket West Indies (CWI) director, told a
local media conference that the committee would carry out
“surgery” on the 36-page governance report with a sense
of “urgency” and expect to be able to submit its findings
within a month.
“We are in the process as a board of putting together a group to do a surgery on the proposals,” Riley said.
“Our committee that we have put together will look at it, come back to the board and then we will make our
submission.
“I remember the last report was the Barriteau Report which said they would dissolve Cricket West Indies – it cannot
be done in law. I’m not a lawyer … but I know you cannot take over a company. The only body that can do that would
be the shareholders and all six shareholders would have to agree to that. If one says no, it’s over. But we will report
to our membership and the people of Barbados in due course once that committee does its surgery on this report.”
The BCA is one of six constituent boards of CWI currently mulling over the report which was submitted by task
force chairman, Jamaican businessman and senator
Don Wehby.Riley, who has often been at odds with the
current Ricky Skerritt-led administration, said he had
no issues with reducing the size of the board once the
executive functions were carried out efficiently.
“If they say – and again the shareholders would have
to agree to this – you reduce the board instead of
having two directors per shareholder you have one,
once you have the executive arm functioning properly
I have no difficulty with that,” Riley explained.
“But as I said, we’re going to deal with it as a board,
take the advice of the committee which we’ve put
together and the committee is a fairly high-powered
one. We have asked that this thing be dealt with ASAP
so I hope that within a month, we will have a report if
not sooner.”
The task force was commissioned by Skerritt,
following his unseating of three-term incumbent
Dave Cameron last year, making good on a campaign
promise to review the governance structure of CWI
once elected.
The report is also now available to the public on
the CWI Website https://www.windiescricket.com/
cricket-west-indies/the-wehby-report-distributed-tocwi-
stakeholders/