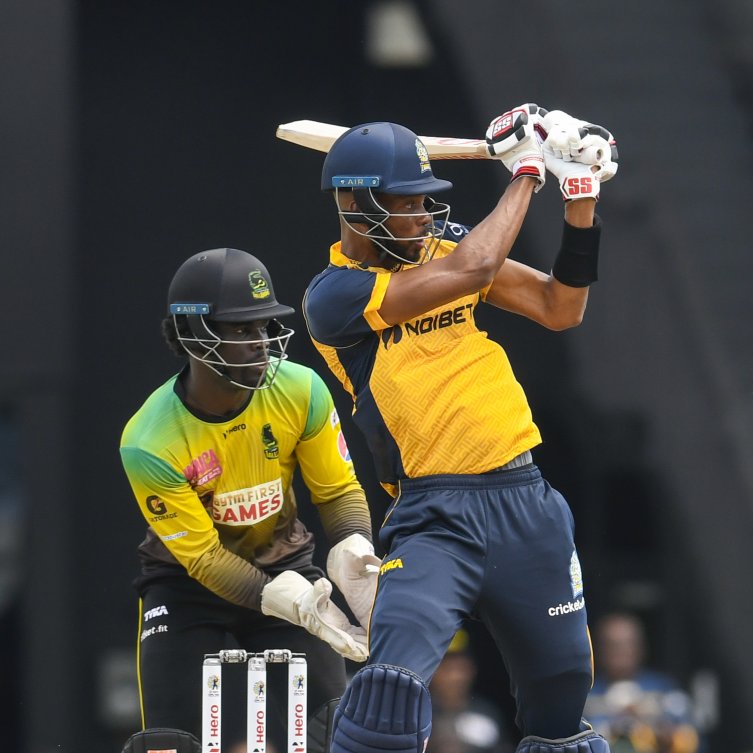 The Points Table at the end of the 2020 Caribbean Premier Leagues’ (CPL) first two rounds,
completed as they were on Sunday, August 23, made for very interesting reading. 2019
finalists, the Trinidad & Tobago Knight Riders headed the table with six points, having won
all three of their matches played. Breathing down their necks with an identical points tally was
the St Lucia Zouks, who have so far emerged as the Tournament’s
surprise package and are seemingly making
a very strong bid for playoff inclusion.
At the end of Round 2, the Zouks had
played 4 matches, winning three and
losing just one.
Rounding out the top half of the second round
completed Points Table were perennial playoff
contenders, the Guyana Amazon Warriors.
Having played 4 matches the Warriors had
accumulated 4 points, winning two and losing
the same number.
At the end of Round Two the Tournament’s
defending champions the Barbados Tridents
were sitting fifth in the standings. Marginally
behind the Jamaica Tallawahs with an identical
record of 1 win and 2 losses from three matches
played but with a slightly inferior run rate.
Rounding out the table, in the cellar position, were
the hapless St Kitts Patriots with their unenviable
record of 0 points from three losing matches.
In terms of overall individual performances the
indisputable surprise of the Tournament to date has
been Royston Chase’s emergence as a bona fide T20
allrounder. Arguably sufficiently so as to now be meriting
future consideration for inclusion in the West Indies T2o
Squad. Playing for the St Lucia Zouks, Chase had scored 122
runs from 4 matches at a jointly impressive 40.66 average
and 125.77 strike rate. He had also captured 5 wickets at a
similarly impressive 9.60 average and 4.80 economy rate
with his off-spin bowling.
The other noteworthy performance to date, certainly in
terms of future West Indies’ selectorial considerations
with the ICC World Cup now scheduled to be playednext year, has been Sunil Narine’s consolidation of his worthiness as a bona fide T20 opener.
Batting at the top of the order for the Trinbago Knight Riders, Narine has already registered
two fifties enroute to an 111 run aggregate at a 37.00 average and with a 135.36 strike rate. Not
surprisingly Narine has also been one of the Tournament’s most outstanding bowlers, with 4
wickets at an average of 13.75 and a 4.58 economy rate.
The Trinbago Knight Riders unbeaten record at the end of Round Two, can be attributed
to the all-round strength of their very balanced squad. With proven power-hitters such as
Narine, Colin Munro, Darren Bravo and skipper Kieron Pollard in their lineup, the Knight
Riders have proven themselves equally capable of posting formidable totals or successfully
chasing those that their opponents have posted.
The Knight Riders posted 185/3 in their August 23 clash against the Barbados Tridents
defending champions for the Tournament’s highest team score to date. They also had scores
of 147/6 and 136/3 in their respective winning matches against the Guyana Amazon Warriors
and the Jamaica Tallawahs.
The Zouks’ somewhat surprising emergence to date, as a seemingly legitimate playoff
contender, can likewise be attributed to their squad solidity in both departments of batting
and bowling. Along with Chase the Zouk’s batting has also been
punctuated by notable performances from Andre Fletcher (96
runs at a 32.00 average and 124.67 strike rate) and Mohammad
Nabi (90 runs at a 30.oo average and 147.54 strike rate). It is
the undeniably Zouks’ bowling however that has been the
backbone of their strong 2020 Tournament showing thus
far.
With 10 wickets in four matches at a 12.70 average and
8.37 economy rate, New Zealander Scott Kuggeleijn has
emerged as the surprise bowling package, troubling all
opposing batters with his deceptive pace. Kuggeleijn has
been ably supported by Chase’s off spin and as well by
the medium pace of Kesrick Williams whose 5 wickets so
far have been captured at an average of 25.00 and a 8.33
economy rate.
For the third placed Guyana Amazon Warriors, a noticeably
overweight Shimron Hetmeyer registered impressive
fifties, 63 not out and 71 respectively in his first two innings.
He then however had a first ball duck and scored only 4 in
the Warriors subsequent matches.
Bowling for the Warriors South African Imran Tahir has
been the most successful to date, Tahir’s 8 wickets have
come at 13.25 average and 6.62 economy rate.