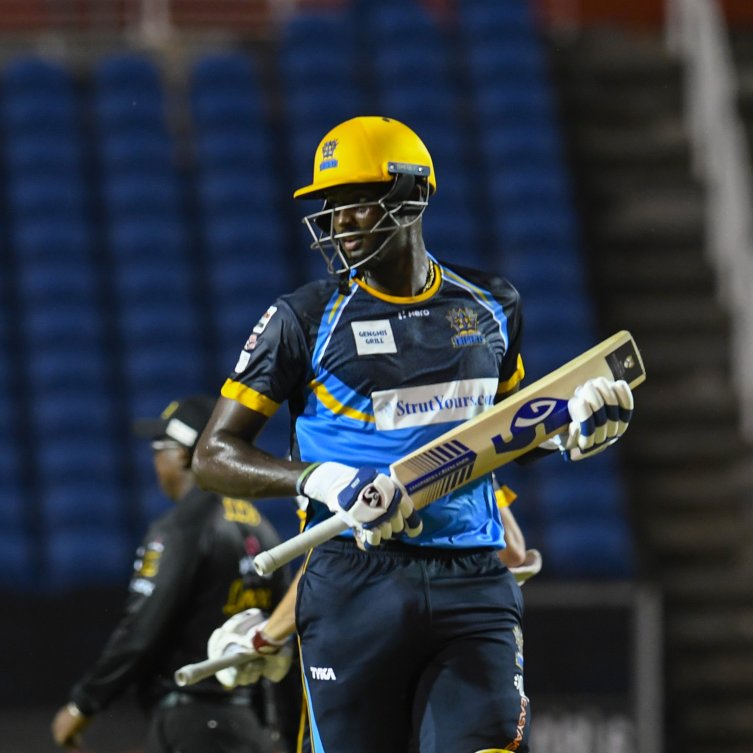 Defending champions, Barbados Tridents, were among three teams languishing in the
bottom half of the 2020 Caribbean Points Table at the August 23 conclusion of the first
two of the scheduled five Preliminary Rounds. After three matches played the Tridents
were on 2 points with one win and two losses. The Tridents’ win-loss record was
indentical to that of the Jamaica Tallawahs, with the latter however enjoying a marginally superior
net run rate.

For the Tallawahs South African Glen Phillips has to date been their highest run scorer with an
aggregate of 102 runs from 3 innings at a 34.00 average and 130.76 strike rate. The Tallawah’s
powerhouse “Superman” hitter Andre Russell has so far tallied 92 runs at a 46.50 average and
suprisingly low 116.25 strike rate from his 3 innings batted.

In the bowling department, the Tallawah’s have been led by Afghanistan off-spinner Mujeeb Ur
Rahman, whose 6 wickets to date have been captured at an average of 9.33 with a 4.66 economy
rate.
Tridents captain Jason Holder has led his team’s batting so far, scoring 99 runs in three innings at
a 49.50 average and healthy 186.79 economy rate. He has been well supported by Johnston Charles
99 run, three innings tally. Charles runs have been at an average of 30.33 and 156.89 strike rate.

Bowling for the Tridents, another Afghanistan leg-spinner Rashid Khan, has been the most
succesful. Khan has so fare taken 4 wickets at a 19.50 average and 8.66 economy rate.
Not surprisingly cellar dwellers the St Kitts Patriots have so far struggled to register any individual
performances of note. Skipper Riyad Emrit has tried to led from the front with his bowlin. He has
so far captured 6 wickets at an of 10.16 and a 5.54 economy rate.
The Patriots have however been badly let down by their batting.
After three matches played none of their top order batsmen,
including West Indies T20 opener Evin Lewis have so far managed
to tally anything close to 100 runs. Lewis 71 runs to date have
been scored at a lowly 23.66 average and equally unimpressive
126.78 strike rate. There have also been no individual scores of
fifty or more by any of the Patriots beleaguered batsmen.
Providing the Table leading Trinbago Knight Riders and their
closest contenders St Lucia’s Zouks and Guyana’s Amazon
Warriors all maintain their success rates to date,
that would mean that only one of the bottom
placed three, the Tallawahs, Tridents and
Patriots would be eligible for the remaining
playoff spot. The remaing
three rounds should
therefore feature some
excitingly close matches as all six Franchises battle
fiercely in an attempt
to secure their playoff
spots