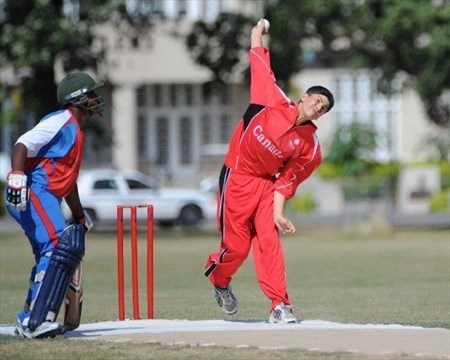 Canada lost the battle but won the war. Dropped catches and a revised Duckworth-Lewis target resulted in an agonizingly close four run loss to Singapore in their September 26 rain affected final CWC Challenge League Group A match in Malaysia. The result left the two countries tied at the top of the standings with 8 points each. Canada’s superior run rate however secured its progression to the next phase of qualification for the ICC’s 2023 World Cup.

Batting first after having been sent in by Canada, Singapore recovered from the early loss of its first two wickets by the fifth over and after only 16 runs had been scored, to post a challenging 245 all out in 48.4 overs. Singapore’s batsmen were gifted several chances as the innings was punctuated by shoddy Canadian fielding which resulted in an alarming number of dropped catches.

Batting at the top of the order, Arjun Mutreja was Singapore’s top scorer, compiling a patient 117 ball 72 before he was caught by Nikhil Dutta to become the first of Abraash Khan’s eventual five victims. Surendran Chandramohan hit an aggressive run a ball 67 (67) reaching the boundary on four occasions while also clearing it for 6 sixes. Mutreja and Chandramohan featured in a 115 run partnership for the 5th wicket, which helped Singapore recover from having been precariously perched at 99-4 after 23 overs

Tim David, the Tournament’s overall top scorer also posted a 41 ball 39 that included 3 fours and 2 sixes. Singapore’s innings also benefited from 26 extras, including 21 wides, that were conceded by the Canadians.

Chasing their initial victory target of 246, Canada had progressed to 95/3 by the 20th over when rain intervened to delay further play. Canada suffered the early loss of Rodrigo Thomas, out caught for 3 with the score on 6, but Abraash Khan 33 (42) and Nitish Kumar 22 (22) added 47 for the second wicket before Kumar fell, caught by Chandramohan off the bowling of Aryaman Sunil. Abrash Khan was the third Canadian wicket to fall, stumped by Singapore’s wicket keeper Manpreet Singh off the bowling of Tim David, just before the rain intervention.

Set a revised target of 196 off 34 overs after play was resumed, the Canadians effort towards victory spearheaded as it was by Nikhil Dutta’s brave 41 ball 33, was gallant almost to the point of success, Needing 10 runs from the final over, the Canadian could only manage 6 however and were dismissed for 191 just four short of their victory target.