Canada’s “Captain Consistent, ”Navneet Dhaliwal led his team from the from in the recently concluded International Cricket Council, Cricket World Cup Challenge Group A Qualification Tournament in Malaysia. Dhaliwal was by far the Canadian’s most impressive batsman, ending the Tournament with an impressive 125.00 average from the three innings he batted. He was also Canada’s highest run scorer with 250 runs.

Dhaliwal’s 250 run aggregate was actually the second highest of the entire Tournament. Singapore’s Timothy David’s 369, which was made from five innings batted in comparison to Dhaliwal’s three, was the Tournament’s highest aggregate.

Srimantha Wijeyeratne 242 (4), Nitish Kumar 229 (5) and Ravinderpal Singh 214 (50 were the other Canadian batters with 200+ Tournament aggregates. Opener Rodrigo Thomas 132 (5) also had a much improved Tournament after his disappointing results from Canada’s preceding participation in the Bermuda hosted America’s T20 ICC World Cup Qualifiers. 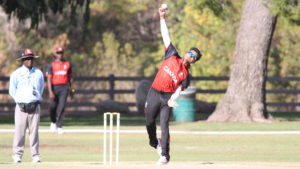 In the bowling department, Saad Bin Zafar emerged as Canada’s best bowler topping the averages with 8 wickets with the lowest Economy Rate of 3.50. Nitish Kumar was however Canada’s most successful wicket-taker. His 10 wickets were captured at an Economy Rate of 5.41 runs per over.