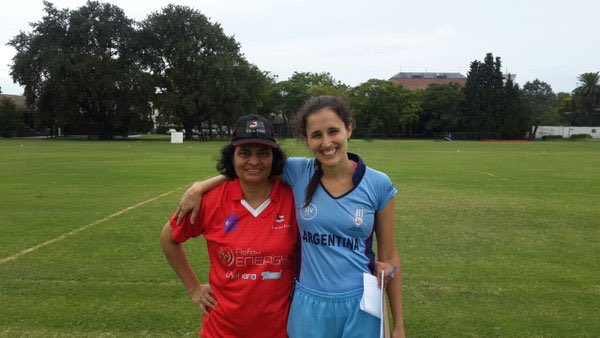 Cricket Canada’s Board of Directors recently announced
the appointment of Durriya Shabbir as Canadian cricket’s
Women’s Coordinator. Ms. Shabbir was chosen from the
pool of applicants for the position that was created by
the Board this past July. Her appointment will last until
Cricket Canada’s next Annual General Meeting, which is
scheduled to be held in May, 2021.
As Cricket Canada’s newly appointed Women’s Cricket
Coordinator, Ms. Shabbir will be directly responsible for
growing all aspects of female cricket in Canada through
further promotion, the engagement of provincial
associations and clubs, as well as the development of
gender specific programmes aimed at increasing the
numbers of active women’s players, coaches and officials.
In fulfillment of her duties Ms. Shabbir will attend
Cricket Canada Board meetings, convene and chair a
Women’s Cricket Committee and will also serve on other
appropriate committees to represent the interests of
women’s cricket.
Born in Madras, India, Durriya Shabbir competed at
National, Zone (South Zone), State (Tamil Nadu Seniors,
Juniors, and Sub-Juniors), and University (University
of Madras) levels, with consistent performances as an
opening bowler and middle order batter. Following her
immigration she later represented Canada as a righthanded
medium pace bowler and middle order batter.
Durriya was also the highest run scorer and had the
second best bowling average for Team Canada at the
ICC Americans Women’s T20 Championships, Cayman
Islands May 2012 She played a key role in Canada’s
qualification during the 2013 ICC Women’s World
Twenty20 Qualifier after scoring 153 runs in the ICC
Americas Qualifier at which she was awarded as the
Tournament’s Batswoman! At the Ireland hosted 2013
ICC Women’s World T20 Qualifier, Durriya was adjudged
Player of the Match for Canada’s fixture against Japan
at the Ireland hosted 2013 ICC Women’s scoring 36 (n.o)
from 31 balls and returning bowling figures of 4-1-11-1.
Durriya also emerged as Player of the Match for two out
of the four matches that were played during the Spirit
of Cricket Tour, Toronto Sept 2016 and was the Captain
of the Canadian squad that played against the MCC
Women’s team.
After her retirement from the international arena,
Durriya continued her active participation in domestic
cricket for several years as a player in the Scarborough Cricket Association’s (SCA) Women’s League. As an administrator Durriya initiated and
launched Cricket Council of Ontario’s Women’s Program by organizing the formation
of the First Ontario Women’s Team. Durriya also co-created the July 2018 Canada Day
Women’s Cup Tournament to provide a National stage for women cricketers in order
to resurrect women’s cricket in all provinces and break down barriers hindering the
growth of the game. She also served as the Manager for the Canadian Women’s Team’s
participation in the 2019 ICC America’s Cup.
Durriya was also a Co-Founder and Board
Member of CanAm Women’s Cricket, which
was formed as a coalition of women cricketers
across North and South America to promote the
sport across the Americas and provide members
with opportunities to “Play More” through
participation in tournaments. One of CanAm’s
major initiatives was its successful 2017 Petition
to the ICC Americas on behalf of all players
(other than USA) in the Region against the unfair
treatment it had provided in granting the USA
Women’s team a path to qualification through the
European Qualifiers.
Durriya now holds a Cricket Australia
Representative Level 2 Coaching Program which
she received in Chicago in 2016, as well as an ICC
Americas – Level I Accreditation, that had been
presented to her in Toronto in 2013, three years
later. As a professionally qualified CHARTERED
ACCOUNTANT (CPA) Martin Brower of Canada
Co, Finance Manager – Eastern Canada,
Mississauga, Canada 2012 - 2014 (A Reyes Holding
Co, providing Distribution & Logistics services
to McDonald’s Restaurants of Canada) MBX
Logistics, Finance Manager, Mississauga, Canada
2009 - 2012 (A Reyes Holding Co, providing
Distribution & Logistics services (surface & ocean
transportation) in Canada and US) Martin Brower
of Canada Co, Supervisor - Financial Reporting,
Capital & Tax, Mississauga, Canada 2003 - 2009.
Commenting on the appointment, Cricket Canada
President Rashpal Bajwa has expressed his and
the Board of Directors absolute confidence that
Durriya Shabbir’s outstanding experience, as a
former Canadian National player, in addition to
her years of active involvement in all aspects of
Canadian cricket will allow her to successfully
fulfill all the responsibilities of the position.

One To Watch: Chuntell Martin.