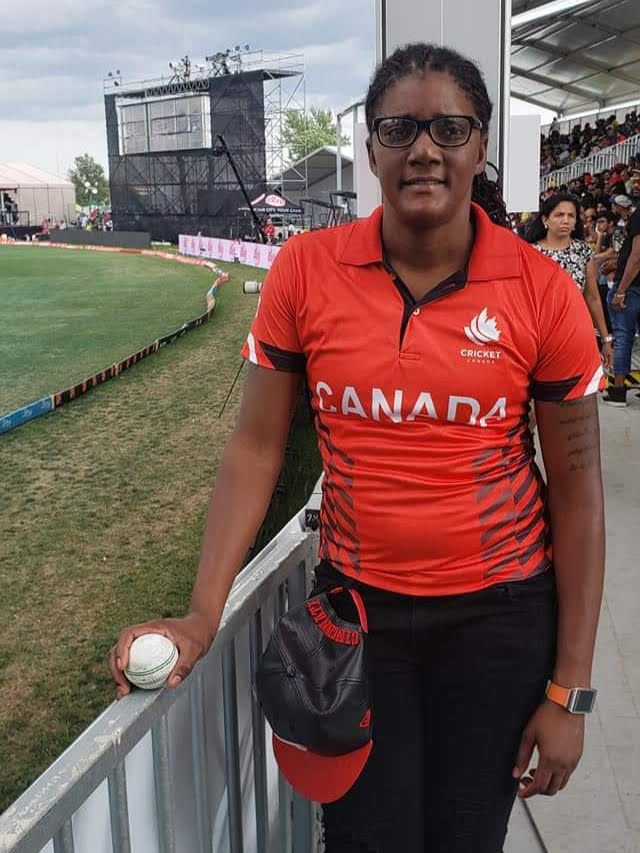 One To Watch: Chuntell Martin.

Born in Kingstown, the capital city of the Caribbean islands of St Vincent and the Grenadines, Chuntell
Martin isn’t at all sure as to when exactly it was that she first became interested in cricket. She knows
though that it was at a very young age and thinks it may have been when she was between the ages of 5-7.
Regardless of the exact date, Chuntell’s interest was pervasive enough to have gotten her involved in St Vincent’s
Junior cricket activities. Cricket’s popularity among her family members and within the island itself was at the
time so great that much of Chuntell’s youth was spent watching and hearing about the West Indies performances
at every corner of her village. The Coaches she was exposed to at that time were also very strict.
Chuntell started her Canadian cricket career as a member of the Kaisoca Ladies Women’s Cricket Club. She now
plays for the Superstars Women’s Cricket Club in the Scarborough Cricket League. Her outstanding League
performances resulted in her selection to the Ontario Provincial team for the 2018 Canada Cup.
Playing as a right-hand batter and right-arm medium fast bowler, Chuntell made her Canadian T20 debut against
the United States at Lauderhill on May 17, 2019. She has so far played three T20’s for Canada with a top score of
12 WICKETS
20. Also reputed to be Canada’s fastest Women’s bowler, she has not as yet been given the opportunity to display
her fast bowling skills and has taken any wickets at the international level.
Now fully in pursuit of an outstanding career as a Canadian Women’s cricketer, Chuntell has set for herself
some very lofty ambitions which she would like to have fulfilled by the time she takes leave from the sport as
an active player. Aside from the most obvious desire of wanting to take care of her mental and physical wellbeing,
Chuntell also hopes that her Canadian cricket pursuits will allow her to travel the world while providing
as many opportunities for her to play as often as she can. She also hopes to be a source of motivation for other
Women’s cricketers to be leaders and fully aware of their self worth. Working with the disabled, those who are
both physically and mentally incapacitated, is yet another ambition of hers. This based on her belief that players
also need nourishing support whether it’s for sport or their personal lives. They both work hand in hand. Starting
an organization of female cricketers that would serve as a source of unified support for their identified needs, is
also one of Chuntell’s admirable ambitions.
Chuntell is in fact well on her way to accomplishing some if not all of her listed ambitions. She has already begun
working with professionals/ other organizations to understand how to accommodate players and others with
disabilities. She has also founded Female Cricketers of Canada as an organization with a mission to provide
needed support for this country’s Women’s cricketers.
Pleased as she is with having fulfilled some of her short-term goals, Chuntell is now looking forward to
accomplishing much more. As she goes about doing so her activities will definitely be worth watching!